Ok, this is no big surprise: enviroment affects star formation in galaxies. Observations have long shown that the star formation rate (SFR) is strongly enhanced when two galaxies merge or simply interact, with strongest enhancements found in the closest galaxy pairs, such as coalescing galaxies, or systems observed near to the first pericentre passage. Enhancements in star formation result in bluer colours and lower metallicities, i.e. characteristic features of young stellar populations, and spectacular objects such as luminous infrared galaxies.

However, a question is still open, as you can guess from the title of today’s astrobite: what is the orbital extent of enhanced star formation in interacting galaxies? At which projected separation of the two galaxies does it disappear? This Letter aims at investigating the enhancement of star formation as a function of the separation in galaxy pairs. The issue is addressed in two complementary ways: from an observational perspective, analyzing galaxy pairs from the Sloan Digital Sky Survey (SDSS), and from a theoretical perspective, studying the outputs of numerical simulations of galaxy mergers.

First, a large sample of ~600,000 galaxies from the SDSS is considered, which have secure spectroscopic redshift between 0.02 and 0.2, and total stellar mass estimated from photometry. For each galaxy, the closest neighbour is singled out, by requiring that it has 1) the smallest projected separation from the galaxy, 2) a rest-frame relative velocity lower than 1000 km/s, and 3) a stellar mass which is not excessively different (a factor of 10) from that of the galaxy.

Then, based on previous measurements of the SFR (see the catalogue in Brinchmann et al 2004), only star-forming galaxies are selected from the sample, without any special requirement on the SFR of their neighbours. In this way, also “mixed” galaxy pairs are included in the resulting sample, which contains ~211,000 star forming galaxies. For each of these galaxies, the authors determine a statistical “control sample” which matches each galaxy in both physical properties (stellar mass, redshift) and environment (local density, isolation), but does not necessarily contain star forming galaxies. The details of the procedure adopted to identify such control samples are deferred to a subsequent paper. 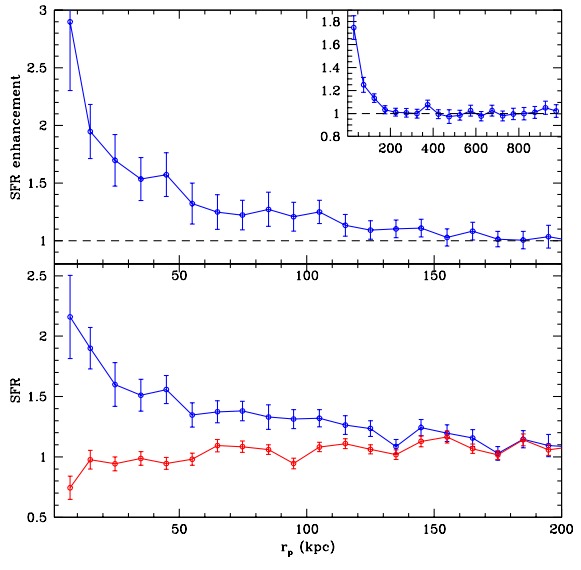 Figure 1 (from Patton et al 2013). Mean SFR enhancement (top panel) and mean SFR (bottom panel) versus projected separation of galaxy pairs. The error bars are the standard error in the mean. Blue is for galaxy pairs from SDSS; red is for their statistical control samples. The dashed horizontal line represents zero enhancement of star formation.

The bottom panel of Figure 1 shows, as a function of projected distance, the mean SFR of all the paired galaxies (blue) and of their statistical control samples (red). The ratio of these two quantities, which is defined as the “enhancement in star formation” is plotted in the top panel, where the inset plot shows its behaviour at even larger values of the projected separation. This figure nicely shows that star formation is enhanced in interacting galaxies, that such enhancement is stronger at the smallest separations, especially less than 20 kpc, and finally that the enhancement in SFR extends to larger separations than what was previously thought, being visible out to projected separations of ~ 150 kpc. In particular, it is found that the 66% of the enhanced star formation in galaxy pairs occurs at separations greater than 30 kpc.

Takeaway message: an enhancement in star formation is not only limited to strongly interacting galaxies with a very close companion, but also to wide galaxy pairs.

Now, are these findings consistent with the predictions from numerical simulations of interacting galaxies? In order to answer to this question, the authors investigate a suite of ad-hoc simulations of galaxy mergers run with the N-body/SPH code GADGET.

The simulated galaxy pairs are simple binary systems, where the stellar masses of the two initial galaxies is set to match the median stellar mass and mass-ratio of the observed SDSS sample. The simulated mergers span a significant set of five values of orbital eccentricities, five values of impact parameters, and three values of merger disc orientation, not limiting the galaxy orbits to low values of eccentricities and to small values of impact parameters. In total, 75 (5 x 5 x 3) orbital configurations for galaxy mergers are explored, and each one can be observed from a random set of viewing angles and at random times during the orbital evolution.

The authors compute the mean SFR over the 75 orbital configurations, observing each orbit from random orientations and at random moments during the merging history. Of course, these random times imply many different values of projected separations. This measurement of SFR is then translated into a measurement of SFR enhancement by normalizing by the SFR of the same galaxy evolved in isolation. 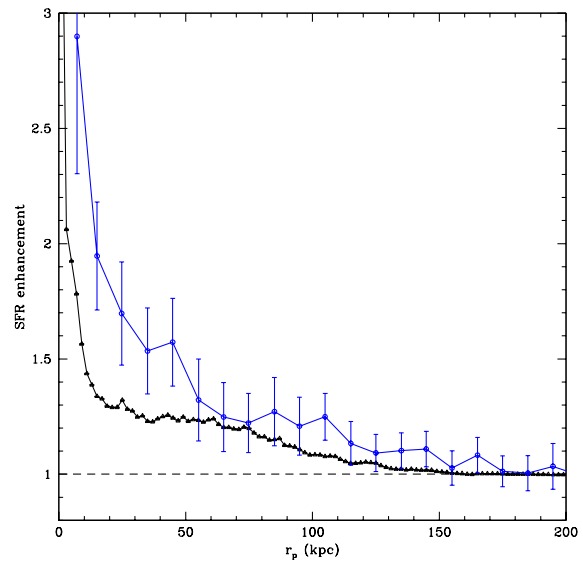 Figure 2 (from Patton et al 2013). Mean SFR enhancement as a function of projected separation in galaxy pairs from SDSS (blue) and numerical simulations of mergers (black).

Figure 2 shows the mean enhancement in star formation rate computed from galaxy merger simulations (black), and the extremely small error bars are due to the average over many orbit orientations. The curve showing the same data derived from galaxy pairs in SDSS is overlaid in blue. Remarkably, the two curves, hence the two different approaches, yield a similar result: an enhancement in SFR is observed out to large projected distances ~150 kpc, though stronger in the SDSS data. In the simulations, the enhancement is a result of starburst activity triggered at the first pericentre passage, which persists as the galaxies move to wider separations.

Hence, the authors can safely conclude that interaction-induced star formation is not only limited to those galaxies which have a close companion, but rather it affects a larger variety of galaxies.