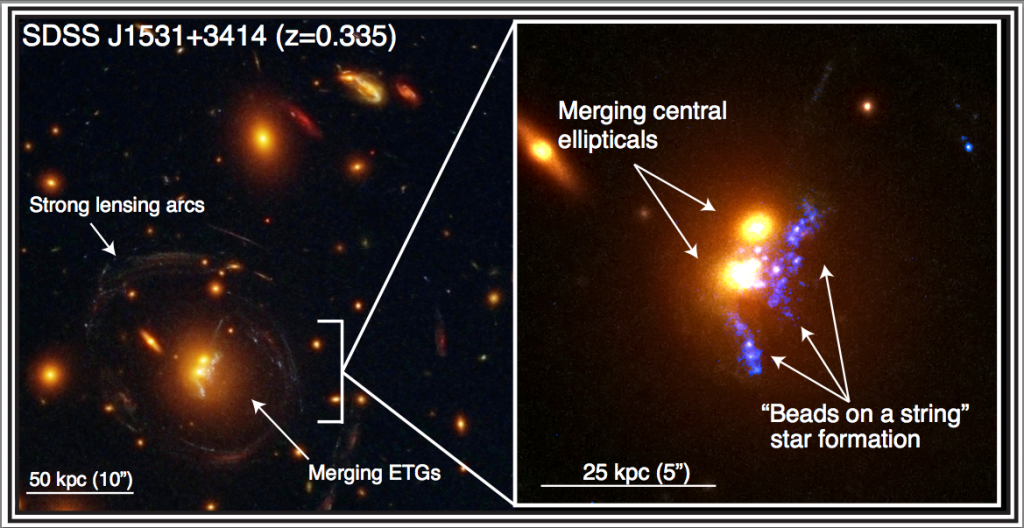 Figure 1. Left: WFC3 image of a galaxy cluster lensing background galaxies. Right: A close up of the cluster, revealed to be two interacting galaxies and a chain of NUV emission indicating star formation.

Take a look at all that gorgeous science in Figure 1! No really, look: that’s a lot of science in one image. Okay, what is it you’re looking at? First, those arcs labeled in the image on the left are galaxies at high redshift being gravitationally lensed by the cluster in the middle (which has the wonderful name SDSS J1531+3414). Very briefly, gravitational lensing is when a massive object (like a galaxy cluster) bends the light of a background object (like these high redshift galaxies), fortuitously focusing the light towards the observer. It’s a chance geometric alignment that lets us learn about distant, high-redshift objects. The lensing was the impetus for these observations, taken by Hubble’s Wide Field Camera 3 (WFC3) in four different filters across the near ultraviolet (NUV, shown in blue), optical (two filters, shown in green and orange), and near infrared (yellow). But what fascinated the authors of this paper is something entirely different happening around that central cluster. The image on the right is a close-up of the cluster with no lensing involved at all. The cluster is actually two elliptical galaxies in the process of merging together, accompanied by a chain of bright NUV emission. NUV emission is associated with ongoing star formation, which is rarely seen in elliptical galaxies (ellipticals are old, well evolved galaxies, which means they’re made mostly of older stellar populations and lack significant star formation; they’re often called “red and dead” for this reason). Star formation is however expected around merging galaxies (even ellipticals) as gas gets stirred up, and the striking “beads on a string” morphology is often seen in spiral galaxy arms and arms stretching between interacting galaxies. But the “beads” shape is hard to explain here, mostly because of the orientation (look how it’s not actually between the galaxies, but off to one side) and the fact that this is possibly the first time it has been observed around giant elliptical galaxies.

Figure 2. Left: SDSS spectrum of the central galaxies, where all spectral features appear at uniform positions–no differential redshift is evident. Right: Follow-up observations of the central galaxies (one in red and one in green) with NOT. Here a small offset is seen, on the order of ~280 km/sec, which is small given the overall redshift of z=0.335.

So what’s going on in this cluster? First, the authors made sure the central two galaxies are actually interacting, and that the star formation is also related. It’s always important to remember that just because two objects appear close together in an image doesn’t necessarily mean they’re close enough to interact. Space is three dimensional, while images show us only 2D representations. Luckily, these targets all have spectroscopy from the Sloan Digital Sky Survey (SDSS), which measures a few different absorption lines and gives the same redshift for all of the components: the two interacting galaxies, and the star formation regions (see Figure 2). Furthermore the authors have follow-up spectroscopy from the Nordic Optical Telescope (NOT), which confirms the SDSS results. So they’re definitely all part of one big, interacting system.

Hα (the 3-2 transition of hydrogen) indicates ongoing star formation, so the authors measure the Hα luminosity of the NUV-bright regions to calculate a star formation rate (SFR). Extinction due to dust and various assumptions underlying the calculation mean the exact SFR is difficult to pin down, but should be between ~5-10 solar masses per year. From that number, it’s possible to estimate the molecular gas mass in the regions. This estimate basically says that if you know how fast stars are produced (the SFR), then you know roughly how much fuel is around (fuel being the cold gas). This number turns out to be about 0.5-2.0 × 1010 solar masses. The authors tried to verify this observationally by observing the CO(1-0) transition (a tracer of cold molecular gas), but received a null detection. That’s okay, as this still puts an upper limit on the gas of 1.0 × 1010 solar masses, which is both within their uncertainties and a reasonable amount of cold gas, given the mass of the central galaxy pair (but for more information on gas in elliptical galaxies, see this astrobite!).

The point is that there’s definitely a lot of star formation happening happening around these galaxies, and while star formation is expected around mergers, it’s not clear that this particular pattern of star formation has ever been seen around giant ellipticals before. The authors suggest that’s because this is a short-lived phenomenon, and encourage more observations. Specifically, they point out that Gemini GMOS observations already taken will answer questions about gas kinematics, that ALMA has the resolution to ascertain SFRs and molecular gas masses for the individual “beads” of star formation, and that Chandra could answer questions about why the star formation is happening off-center from the interacting galaxies. If the gas is condensing because it’s been shocked, that will show up in X-ray observations, but it would be expected between the galaxies, not off to the side as in this case. Maybe some viscous drag is causing a separation between the gas and the stars? There’s clearly a lot to learn from this system, so keep an eye out for follow-up work.