In the past couple of years there has been some observational evidence for a bimodal nature of the star formation efficiency (SFE) in galaxies. Whilst most galaxies lie on the typical relationship between mass and star formation rate (the star forming “main sequence”), slowly converting gas into stars, some form stars at a much higher rate. These “starburst” galaxies are much rarer than the typical galaxy, making up only ~2% of the population and yet ~10% of the total star formation. This disparity in the populations has only been studied for local galaxies and therefore more evidence is needed to back up these claims.

In this recent paper by Silverman et al. (2015), the authors have observed seven high redshift galaxies (or large distance, shown in Figure 1) at z~1.6  with ALMA (Atacama Large Millimeter Array, northern Chile) and IRAM (Institut de Radioastronomie Millimétrique, Spain), measuring the luminosity of the emission line from the 2-1 and 3-2 electron orbit transitions in carbon monoxide in each galaxy spectrum. The luminosity of the light from these transitions allows the authors to estimate the molecular hydrogen (

) gas mass of each galaxy.

Observations of each galaxy in the near-infrared (NIR; 24-500 μm) with Herschel (the SPIRE spectrograph) allow an estimation of the star formation rate (SFR) from the total luminosity integrated across the NIR range,

. The CO and NIR observations are shown by the red and blue contours respectively, overlaid on Hubble UV (i band) images in Figure 1. Notice how the CO/NIR emission doesn’t always coincide with the UV light, suggesting that a lot of the star formation is obscured in some of these galaxies. 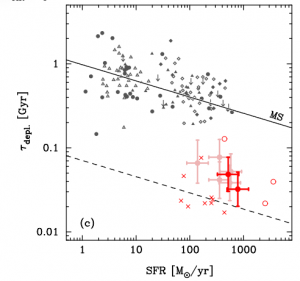 With these measurements of the gas mass and the SFR, the SFE can be calculated and in turn the gas depletion timescale, which is the reciprocal of the SFE. This is plotted against the SFR in Figure 2 for the 7 high redshift starburst galaxies in this study (red circles), local starburst galaxies (red crosses) and normal galaxies at

(grey points), with the star forming main sequence shown by the solid black line. These results show that the efficiency of star formation in starburst galaxies is highly elevated compared to those residing on the main sequence,but not as high as those galaxies in the local universe.

These observations therefore dilutes the theory of a bimodal nature of star formation efficiency, and leads to one of a continuous distribution of SFE as a function of distance from the star forming main sequence. The authors consider the idea that the mechanisms leading to such a continuous nature of elevated gas depletion timescales could be related to major mergers between galaxies, which lead to rapid gas compression, boosting star formation. This is supported also by the images in Figure 1, which show multiple clumps of UV emitting regions, as seen by the Hubble Space Telescope.

To really put some weight behind this theory though the authors conclude, like most astrophysical studies, that they need a much larger sample of starburst galaxies at these high redshifts ( z ~ 1.6) to determine what the heck is going on.