The commonly accepted theory of dark matter (called Lambda-CDM) provides us with good general understanding of how structure (filaments, galaxy clusters, galaxies, etc.) forms in our Universe. This is shown again and again in simulations of our Universe in a box, made by following the motion of dark matter particles and their clustering as controlled by gravity. However, problems arise in trying to reproduce the detailed baryonic properties (namely stars and gas) of real galaxies. One of the biggest problems is faithfully reproducing the star formation history of real galaxies, both in terms of when they form (early in the Universe or more recently) and how many form.  As it turns out, “feedback” processes are essential in reproducing properties of galaxies, including supernova explosions which can heat, ionize, and remove gas from galaxies (shutting off star formation). In many cases supernovae may be the dominant form of feedback, but, as the authors of today’s paper explore, it may not be the only important form of feedback, especially in the early Universe.

High-mass X-ray binaries (HMXB’s) are binary star systems consisting of a massive star orbiting either a neutron star or a black hole. These systems produce a significant amount of X-ray emission, originating from the accretion of the massive star onto the more compact companion; this is shown in an artist’s drawing in Fig. 1. In some cases, these systems can produce fast moving jets, dumping kinetic energy into the surrounding gas. Both of these can heat, ionize, and blow away gas within a galaxy, and in turn play a significant role in how stars form within the galaxy. The authors indicate that recent work has shown that these systems are more powerful in the early Universe, and may play a role in controlling star formation in early galaxies that will have a lasting impact for their entire evolution. For the first time, the authors implement a HMXB feedback method into a cosmological hydrodynamics code, and explore how it affects galaxy evolution in the early Universe. 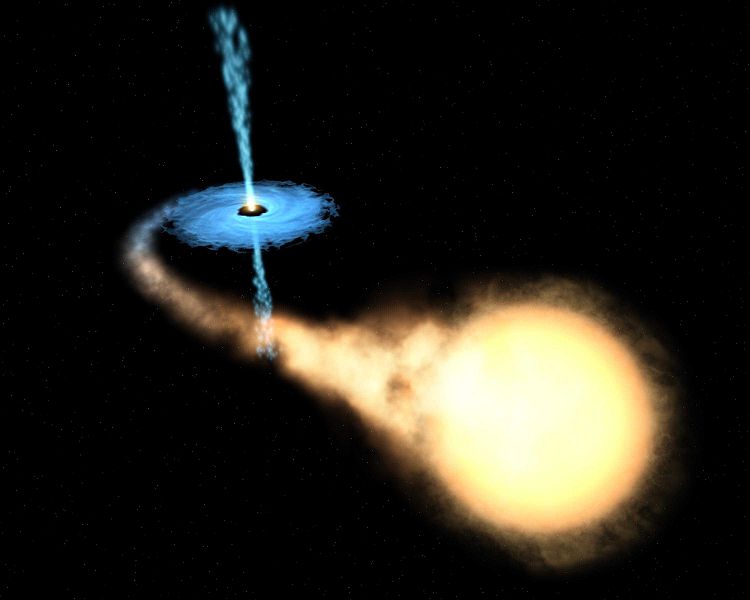 Modelling the Feedback from HMXB’s

The authors use a version of the GADGET-3 smooth particle hydrodynamics (SPH) code that includes a chemical evolution model, radiative heating and cooling (allowing the gas to heat and cool by radiating away or absorbing energy from photons) , and methods for star formation and supernova feedback from Type II and Type Ia supernova. New in this work, however, is a model to simulate the feedback from HMXB’s. Due to the finite resolution of the simulations, they construct a model that accounts for a population of HMXB’s in a galaxy, rather than individual HMXB’s. Using known estimate for the number distribution of stars (known as the IMF), the authors estimate that about 20% of massive stars that form black holes in a given galaxy form in binary systems. In their simulations, these systems deposit 1052 erg of kinetic energy into their surroundings (about 10 times that of a single supernova explosion) , and spend about 3 million years radiating X-rays at a luminosity of about 1038 erg s-1. These numbers are not well constrained, however, but the authors tested a few different values and found these to produce the most realistic amount of feedback (as compared to observations).

The authors produce two primary cosmological simulations, evolving from high redshift down to a redshift of about 2 (about 5 billion years from present day), using only supernova feedback (designated S230-SN) and supernova feedback + HMXB feedback (designated S230-BHX). The authors use these two simulations to compare how a HMXB feedback model affects the total rate of star formation in their simulations, and the properties of star formation of individual galaxies in their simulations. Some of these results are discussed below. 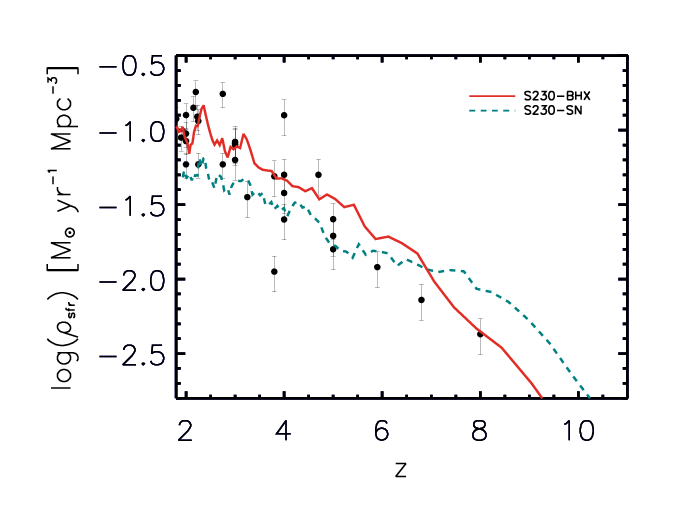 Fig. 2: The star formation rate density in the entire simulation (i.e. how much mass is converted into stars per year per unit volume, computed for the entire simulation box) as a function of redshift for the SN only (blue, dashed) and SN + HMXB (red, solid) simulations. The horizontal axis is redshift, with lower redshift (z=2) closer to present day than higher redshift (z=10). The black data points are observations from Behroozi et. al. 2013. (Source: Fig. 1 of Artale et. al.)

Fig. 2 compares the effect of the SN (blue) vs. SN + HMXB (red) feedback models on the star formation of the entire simulation box as a function of redshift, from the early Universe (right) to z = 2 (left). The vertical axis gives the star formation rate (SFR) density in the entire simualtion. The SFR density is computed as the total mass of gas converted into stars per unit time per unit volume. At high redshift (early time), the HMXB feedback suppresses the total SFR density, and delays star formation towards lower redshift (later time). The higher SFR density in the HMXB model at lower redshifts is due to the fact that there is much more gas leftover at lower redshifts to be transformed into stars, since it wasn’t used up as dramatically at high redshifts as the SN feedback only model. 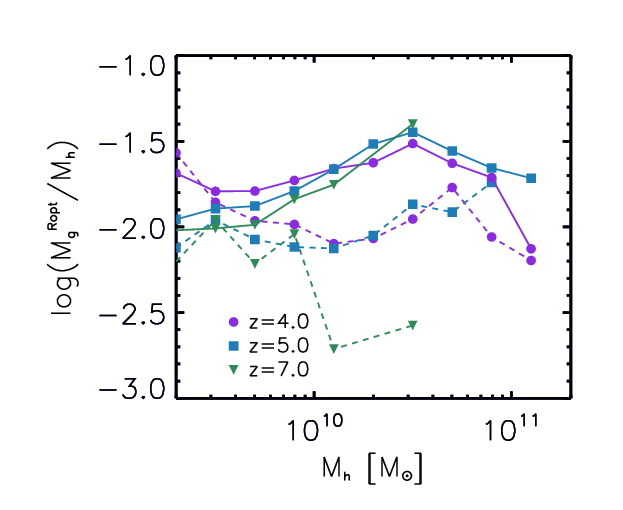 The three most significant (in terms of mass) components in a galaxy are its dark matter halo, gas, and stars. The two feedback models have a significantly different effect on the amount of gas contained within galaxies over time. Fig. 3 shows the ratio of galaxy gas mass to galaxy dark matter mass as a function of the galaxy’s dark matter halo mass over three redshifts, z =7 (green triangles), z = 6 (blue squares), and z = 4 (violet circles). The SN only simulated is shown with the dashed lines, and SN + HMXB with solid lines. As shown, the SN only simulations have less gas at all redshifts and at almost all halo masses. In the SN only model, the higher SFR at early times uses up more gas, and drives bigger outflows, causing overall less gas to remain within the galaxy. The HMXB + SN, however, reduces SFR at early times without driving large gas outflows, allowing for gassier galaxies that have gradually increasing SFR (Fig. 2) towards low redshifts, as the effectiveness of HMXB’s decreases.