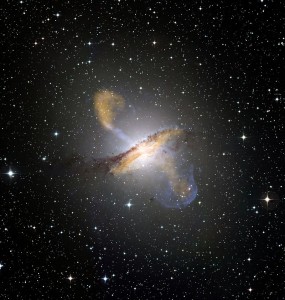 Figure 1. Centaurus A (NGC5128) is the largest extragalactic radio source projected on the sky and is at a distance of 3.8Mpc. Located in the constellation of Centaurus in the southern sky it can be seen with the naked eye in perfect conditions. Credit: ESO.

Both observations and theory show that galaxies can’t form stars on their own indefinitely – they need some mechanism to moderate star formation in order to match the evolutionary path that we know galaxies follow. Turbulence within the gas used for star formation is needed in order to keep a galaxy ‘alive’. By mixing the gas available, denser areas can begin to form of cold hydrogen gas which can eventually collapse and form stars. As soon as this mixing stops, and the gas is allowed to settle, then further star formation will not take place.

Supernova explosions send shock waves and energy propagating through the inter stellar medium (ISM), which could produce enough turbulent mixing of the gas to self-regulate star formation.  But radio jets streaming from active black holes could be an even stronger source of turbulence which causes the same effect; known as positive feedback which occurs on a local scale (unlike the more documented negative feedback which acts to decrease star formation rates on a global scale across a galaxy). Although the mechanism responsible (supernovae, black holes or something else entirely)  for this turbulent mixing is uncertain, what is certain is that simulations which do not contain such a prescription produce galaxies which are on average too small to match observations.

The authors of this paper search for observational evidence for this interaction of radio jets with the ISM by observing NGC5128 (Centaurus A), which is a giant elliptical galaxy hosting a massive black hole (~20 million solar masses) and large radio lobes extending over 250 kiloparsecs (see Figure 1). Using the MUSE spectrograph on the VLT in Chile, they searched for the broadening of emission lines along optical structures which are in line with the radio jets of the galaxy. Such a broadening would indicate places where the gas has been shocked and therefore heated; providing energy for turbulent mixing. Therefore these areas are the predecessors of star forming birth clouds.

Figure 2 shows the results from observing the first Balmer line Hα emission from Centaurs A. The left panels show the flux of this line and right panels show how broad this line was in the given area. If an emission line is broadened, it means that the gas giving out this wavelength of light is moving chaotically and so a Doppler shift is imprinted on the narrow emission line to both lengthen and shorten the wavelength, giving a broader line feature on the spectrum.

One of the immediately noticeable features of these maps is the existence of the strange arc like structure (visible as the dark blue structure in the second panel of Figure 2) which is entirely separate to the main filamentary structures and also opposite in curvature to the optical stellar shell surrounding the central galaxy. The authors rule out the theory that these arcs are part of a separate filament feeding gas down onto the main structure as there would be a smoother velocity transition (calculated from the difference between the broadness of the two emission lines Hα – [NII]) between the arc and filament than seen in the third panel of Figure 2. They instead muse that these arcs are backflows of gas from the active black hole outburst formed when fast moving material ran into slow moving material at the front. Simulations show that this is completely plausible however such a structure would only be visible for ~1Myr, suggesting that the black hole activity in Centaurus A began relatively recently.

Figure 2: The first panels show the Hα flux maps of the main inner filament and the second with that area subtracted to show an arc like structure in the background. The third panel shows Hα – [NII]; by comparing the difference between the broadness  of two different emission lines ([NII] is an electron emission from Nitrogen) we can work out how fast the gas is moving. The fourth panel showing the broadening of the Hα emission line around the edges of the clumps of the main filament (right). All four maps show the same region of the galaxy. Credit: Hamer et al. (2014).

The second most striking results shown by the maps in Figure 2 is the thin region of highly broadened Hα emission around the edges of the  clumpy main filamentary structure, which can be seen in the fourth panel. The broadened width of these lines (~400 km/s) agrees with the predictions of simulations of shock waves, suggesting that this clumpy filamentary structure is surrounded by a shell of gas which has interacted with the radio jet. These clumps are also extremely bright in the UV (as observed by GALEX), suggesting that the gas in the filament is forming stars – possibly as a direct result of this interaction with the radio jet. The authors therefore claim that this is direct observational evidence for positive feedback from the active black hole in Centaurus A.

If their interpretation is correct, the black hole could spur star formation on Centaurus A for hundreds of millions of years to come.