How black hole and merger can kill a galaxy

Galaxies are stellar neighborhoods of young and old stars. However, these galactic enclaves are only for exclusive members based on age. Some are spattered with young stellar populations and bursting with active star formation; these galaxies are typically blue in color, such as our own Milky Way.  Some are run by retired veteran stars; these galaxies are “red and dead”, as star formation has been shut off — or quenched, if you want to be fancy. What causes star formation to shut off in these red and dead galaxies has been a long-standing cosmic riddle. Since the building blocks of stars are cold molecular gas, some mechanisms are thought to drive these gases out of the galactic vicinity.

How about winds from supernovae (SNe) or massive stars, collectively known as stellar feedback? Various research (see this bite, for instance) has shown that stellar feedback may help regulate star formation in low mass (< 10¹² Msun) and low luminosity galaxies. These galactic winds are powerful enough to drive materials out of these pee-wee galaxies. However, stellar feedback becomes increasingly ineffective in higher mass (> 10¹² Msun) galaxies that have more gravity to hold on their gases. Galaxy mergers can lend a helping hand, by stripping an infalling galaxy of its gas supply and inducing intense starbursts (thus consuming gas and causing stellar feedback). However, merger+stellar feedback quenches a galaxy much slower than observed, a hint that another feedback is in action.

Active galactic nuclei, which are black holes (BH) at the centers of galaxies activated by accretion of matter, can drive rapid outflows such that their immediate environments are too hot or too devoid of gas to form stars. This is AGN feedback. The authors of this paper investigated how mergers and AGN feedback cooperate to quench star formation, by simulating a high-mass  (10¹² Msun)  redshift z=2 galaxy in three different merger scenarios: enhanced merger, suppressed merger, and the original “reference” merger. Enhanced merger is achieved by increasing the mass of the infalling object while suppressed merger is achieved through a series of small accretion events. The authors used a method to fix the local environment and arrive at the same final galaxy mass despite the different merger histories, thereby isolating the specific role of AGN and merger in the quenching process.

Fig. 1 – The simulated galaxy in IVU wavelengths at z=2.3. Each column refers to the three different merger scenario: suppressed, reference, and enhanced. The top panel is for SNe-only while the bottom panel is for BH+SNe. Notice the differences in appearance of the galaxy between the BH+SNe reference and enhanced merger scenarios and all other figures. [Adapted from Figure 1 of the paper] 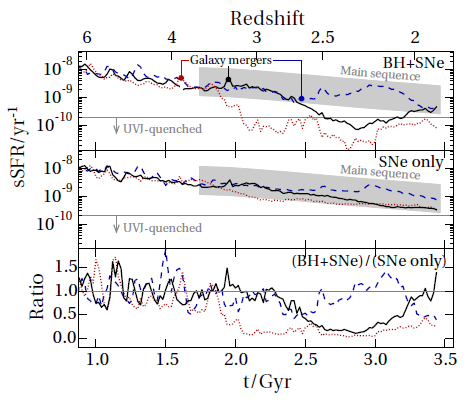 FIg. 2 – Specific star formation rate (sSFR) as a function of redshift and time. The top panel is for BH+SNe while the middle panel is for SNe-only. The bottom panel is the sSFR ratio between the BH+SNe and SNe-only simulation. Black line refers to the reference merger, blue line the suppressed merger, and red line the enhanced merger scenario. The gray band is when the galaxy is at the main sequence stage. When the galaxy’s specific star formation rate drops by below the gray line labeled “UVJ-quenched” (i.e. 2×10⁻¹⁰ Msun per year), the galaxy is defined as quenched. [Figure 3 of the paper]

Mergers are AGNs’ wing-men, so to speak. They initiate the quenching process by disrupting the AGN disk. With no disk to confine the AGN’s rapid outflows and shield the star-forming regions, AGN feedback is increased, pushing the galaxy into a long-term quiescent state. In the suppressed merger scenario, the gaseous disk surrounding the AGN limits the effect of AGN by directing the outflow in a funnel perpendicular to the disk, thereby leaving star-formation uninterrupted. The presence of AGN is also crucial in maintaining the galaxy’s quenched state. When the authors manually turned off the AGN in the enhanced merger BH+SNe case when the galaxy is quenched for the first time, star-formation quickly re-establishes, as shown in Figure 3.

It appears that mergers and AGN feedback work together synergistically to quench a high-mass galaxy. While AGN feedback is essential, stellar feedback is negligible, as outflows from supernova-driven winds struggle to escape the galaxy as mass increases. Alas, it all comes down to a race against gravity…! For more ways to quench your star-formation thirst, check out these related astrobites (1, 2, 3). 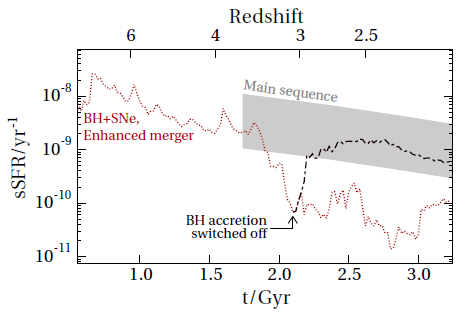 Fig. 3 – Specific star formation rate (sSFR) as a function of time/redshift when the AGN is turned off at z=3 (black line). Compared to when the AGN is still “alive” (red line), the death of the AGN results in the galaxy restarting its star formation and eventually joining the main-sequence (gray band). [Figure 7 of the paper]