How do you simulate a massive star’s behavior when its closest neighbor is a black hole? Astronomers routinely make simplifying assumptions to understand how stars behave. If there are thousands of stars orbiting one another, treat them as point masses. If there is a single, solitary star, treat it as a perfectly symmetrical sphere. But just like massless pendulums and frictionless pulleys, these ideal scenarios aren’t reality. Sometimes, to truly understand stars, you need to roll up your sleeves and start thinking about pesky details—things like three dimensions, X-ray photoionization, and the Coriolis force.

Windy with a chance of X-rays

In today’s paper, Čechura and Hadrava examine what happens to the runaway gas from the surface of massive stars—the stellar wind. In particular, they look at systems with massive stars so close to a companion neutron star or black hole that the stellar wind is jarred into a new orbit and heated to the point of emitting X-rays. This is a high-mass X-ray binary.

The authors begin with a 2D model to understand how the stellar wind behaves differently when one star is more or less massive than the other, or when the wind itself is programmed into the model in subtly different ways. As it turns out, emitting tons of X-rays is more than the end result of stellar wind particles slamming into an accretion disk. Those X-rays continue the story by ionizing nearby gas and slowing down the incoming wind. When the wind slows, the overall shape of the system changes thanks to gravity and the Coriolis force, which in turn affects how many X-rays are emitted!

With these variables better understood, the authors create a full-fledged 3D hydrodynamic model of a high-mass X-ray binary. A 3D model returns more accurate densities and velocities than a 2D model because the geometry is more realistic. They base this simulation on the well-studied X-ray binary Cygnus X-1, which is generally observed in one of two states: either it is emitting relatively few X-rays of high energy (low/hard), or it is emitting many X-rays of low energy (high/soft). In the low/hard state, wind from the massive star is actively flowing into an accretion disk around the companion. The high/soft state takes over when that flow is disrupted.

To simulate the transition from Cygnus X-1’s low/hard state to its high/soft state, the authors suddenly increase the X-ray luminosity of the compact companion. As a result, gas in the stellar wind never makes it to the accretion disk because it is bombarded with X-rays. It turns out that this X-ray photoionization process is even more important than the simpler 2D model suggested. 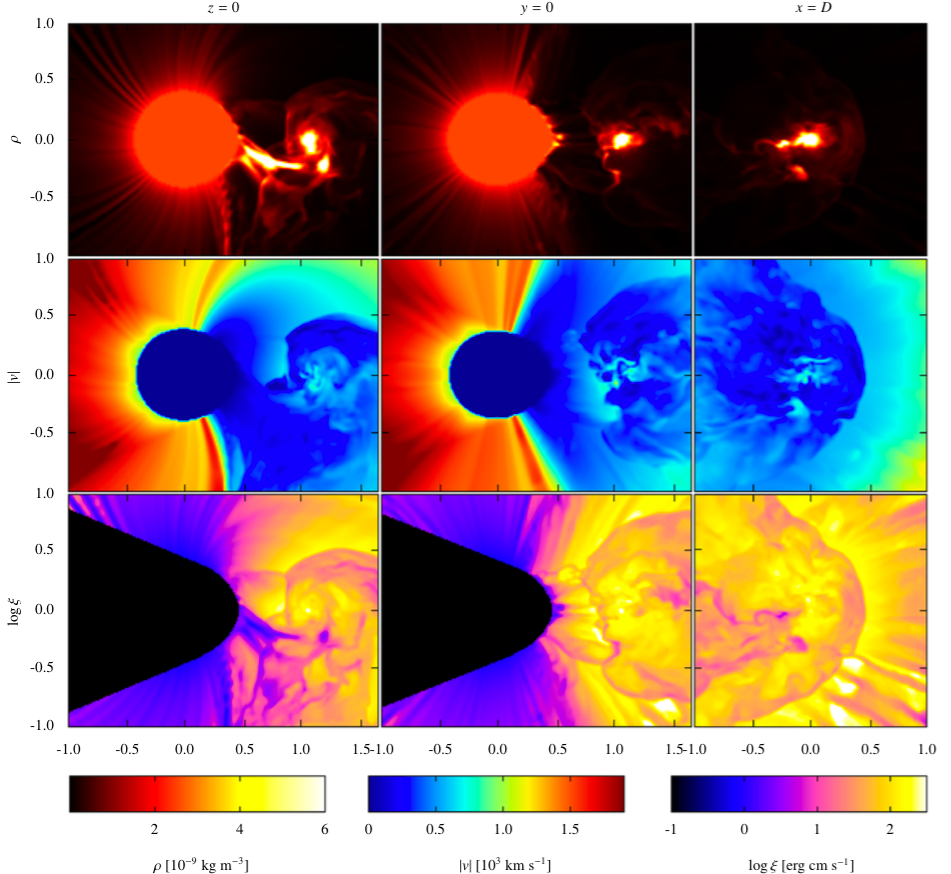 3D cross-section of Cygnus X-1’s stellar wind in the low/hard X-ray state, when material is flowing into the compact companion’s accretion disk. Each column represents a 90-degree change in viewing angle. From top to bottom, the rows show particle density, velocity magnitude, and degree of ionization. The black region in the ionization panels is an X-ray shadow, where no particles are photoionized. Fig. 7 from the paper. 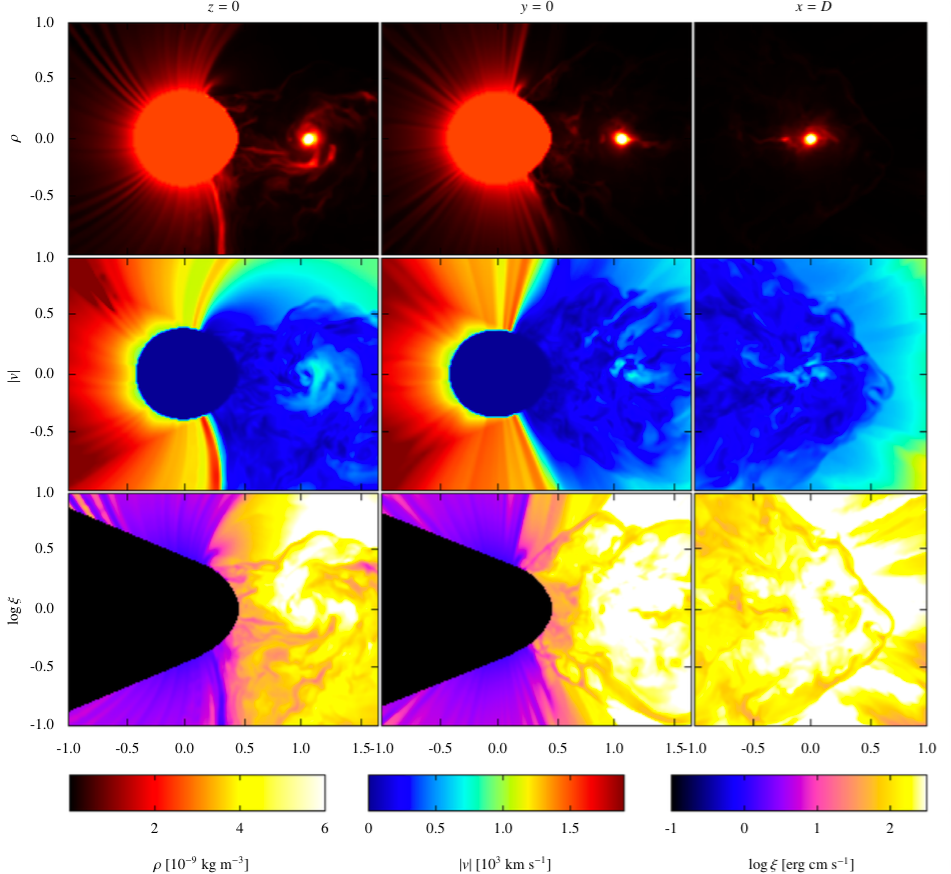 3D cross-section of Cygnus X-1’s stellar wind in the high/soft X-ray state, when material from the stellar wind is not flowing into the compact companion’s accretion disk. As in the previous figure, the columns show three mutually perpendicular viewing angles and the rows show different physical parameters (density, velocity magnitude, and degree of ionization). Fig. 8 from the paper.

Of course, even this detailed 3D model isn’t perfect. In the future, the authors would like to more accurately consider radiative transfer as well as account for turbulence in the stellar wind. And Cygnus X-1 is a single test case! Still, this is a huge step forward from point masses, perfect spheres, or even a 2D simulation. Half the challenge in simulating reality is choosing which assumptions are reasonable tradeoffs to construct a useful model, and this paper illustrates just how important X-rays are in determining the behavior of an X-ray binary.