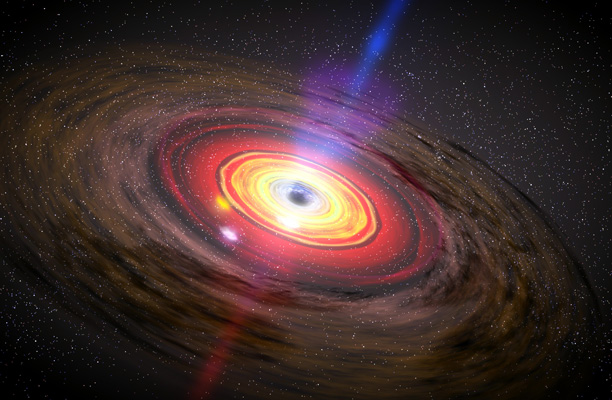 Black holes are some of the most exotic objects in the observable Universe, and represent the end stages of extremely massive stars. Aside from having curious theoretical properties, they also produce complicated phenomena through their interactions with surrounding material. Since black holes do not emit any observable radiation on their own (i.e. any photons within their event horizon can’t escape), their existence is usually inferred from the emission produced by a surrounding accretion disk. This high energy emission often changes over time, and this variability allows us to constrain certain properties of the black hole and its associated accretion flow.

In this paper, the authors examine the time-varying emission from several black hole candidates in an effort to constrain the geometry of the surrounding material. Occasionally, a black hole accretion disk shifts from emitting high energy photons to lower energy photons and back again over a few weeks or months in what is called an ‘outburst event’. By examining these changes, one can determine the physical properties of the region around the black hole producing this emission.

In describing accretion disk physics, the emission is often characterized by how photons are distributed in its spectrum. Disks that tend to emit high energy photons (ex. high energy X-rays) are termed “hard”, whereas lower energy photons (ex. lower energy X-rays) are termed “soft”. This emission can change over time due to a process in the disk called inverse Compton scattering, in which high energy electrons “boost” photons to higher energies through their mutual collisions. This has the effect of shifting the emission from softer to harder photons. To model the emission process, the authors model an accretion disk with a internal shock wave produced by the inflow of material into the black hole. The resulting flow towards the black hole is puffed up and produces a cloud to inverse Compton scatter photons coming in from disk.

The authors define a quantity termed Comptonization efficiency (CE), which is the ratio of the number of “hard” photons to the number of “soft” photons injected into the Compton cloud. By computing the CE for a black hole candidate over several time points, the authors make inferences about the changing geometry of the accreting material. This is done for several black hole outburst events taken from the literature. For a higher CE (i.e. a “hard” state), the cloud is larger and hotter because the accretion shock wave is relatively large. For a lower CE (i.e. a “soft” state), the Compton cloud is smaller and cooler. Unlike other measures of spectral changes, CE is independent of any model of black hole mass, making it useful in comparisons between different candidate objects.

From examining the CE time-dependence of these events, it is observed that these outbursts start with a large CE. Physically, this happens because there is a large Comptonizing cloud with a relatively low number of soft photons being input from the accretion disk. The cloud then contracts until it reaches a minimum. Input photons from the disk are then Comptonized into higher energy photons. Hence, as a Compton cloud changes its shape and temperature, we can trace geometric changes in the Compton cloud through changes in the “hardness” of its spectrum. Fig. 1 shows the luminosity of the accretion disk vs the measured CE for two different outburst events the object GX 339-4. Each outburst event starts at high CE, then softens to a lower CE, dims in luminosity, and then hardens back to its initial CE. 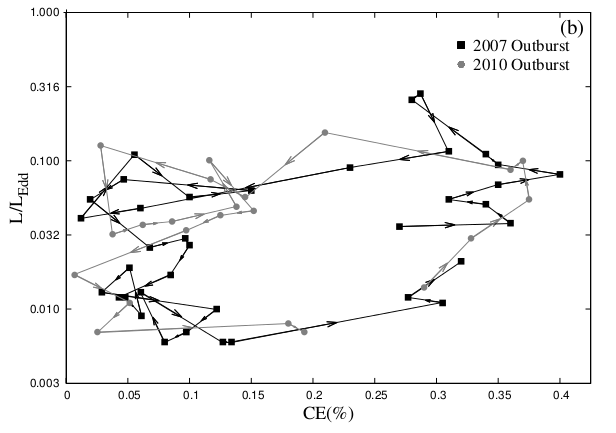 Fig. 1: Luminosity (in units of the Eddington luminosity) plotted against the CE for the object GX 339-4, traced over time. Outbursts from two separate events are shown. (Fig. 7 in the paper)

Additionally, any oscillations in the shocked inflowing material causes observable low frequency oscillations in the output. The authors observe that the CE at a given time seems to be inversely correlated with these oscillation frequencies (see Fig. 2). The range of CE (ex. maximum and minimum) is different across black hole candidates, and this scatter in CE might be due to peculiarities in the outflows in the shocked region. The authors also mention the additional complications if the black hole is spinning, which can reduce the CE by also reducing the size of the shocked region. 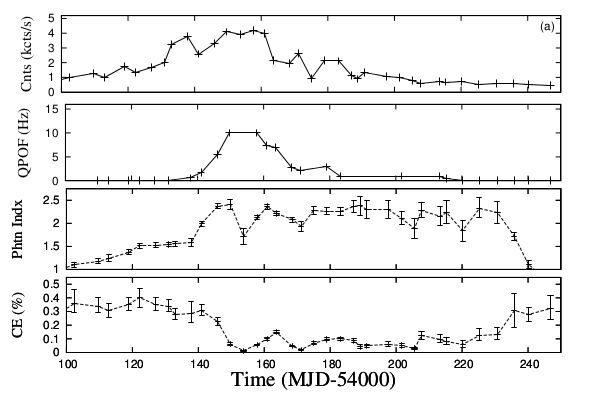 Fig. 2: Photon counts, quasi-periodic oscillation frequency, spectral index (with a high index corresponding to “soft” emission), and CE plotted vs. time for the object GX 339-4. Note that the oscillation frequency increases as CE decreases, and that the emission softens when CE is low. (Fig. 2 in the paper)

Since we can only observe black holes indirectly, these observations of time-variable outbursts provide a valuable opportunity to test our models of accretion disk physics and how black holes should interact with their surroundings.