Super star clusters are literally the superstars in astronomy. They are groups of young, massive stars bound to each other by gravity in a very small volume. Imagine a million stars as bright as a billion suns all packed within the distance from us to our next closest star Alpha Centauri! They are found in the distant as well as the nearby universe: here is an astrobite featuring the cluster R136 in the Large Magellanic Cloud; and Westerlund 1 is the first super star cluster discovered in our Milky Way galaxy. The extreme density of stars is exactly what makes them popular. The strong radiation, stellar winds, and finally supernova explosions of the young stars – collectively known as stellar feedback – play a dynamic role in regulating star formation and the evolution of their host clusters.

We are very far away from understanding the formation of super star clusters. And we are not closer to understanding the formation of individual massive stars that make up super star clusters. Massive stars live fast and die young. A massive star evolves towards the main sequence (i.e. begins its journey as a star by fusing hydrogen in its core) while it is still gathering mass from its surrounding cloud. On the theoretical side, the difficulty comes from modeling the interaction between the starlight and the infalling gas. The intense starlight is capable of pushing away, heating up, and ionizing the gas. We simply do not have the adequate numerical tools to accurately model all these processes simultaneously. Here is a study of the formation of massive stars ignoring the effect of ionization. On the observational side, the formation sites of massive stars are typically too far away and highly obscured by dust. Only recently have our telescopes at longer wavelengths become sensitive enough to peek at these sites. The exact environment from which super star clusters form is still under debate; it is commonly accepted that stars are formed under turbulent conditions.

Today’s paper models the formation of super star clusters from a massive, highly turbulent cloud of gas using computer simulations. The authors start with a spherical gas cloud with 10 pc radius and one million times the mass of the sun, stir it to make strong turbulence (mock-up of the turbulent conditions we see in interstellar gas), and then let the cloud collapse under its own gravity and form stars. It is computational extremely costly to follow the formation of individual stars on this spatial scale. Instead, sink particles are created to represent the unresolved clusters of stars formed when the gas density rises above some critical value pre-determined by the available computing power. Sink particles are widely adopted in computer simulations of star formation, like in here and here. After the sink particles are created, they shine light onto the surrounding gas, trying to drive them away. At the same time, gravity tries to pull the gas onto the sinks to make them grow bigger and brighter (this is why they are called ‘sinks’). The objective of the paper is to look into the dynamical role of the stellar radiation in limiting the final star formation efficiency (SFE), defined as the fraction of mass in the gas cloud that actually turns into stars. 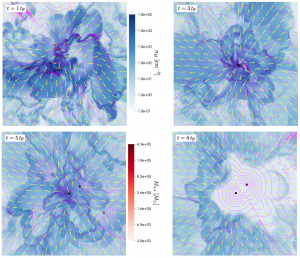 Figure 1. Snapshots of the gas density at four successive times during the evolution of the turbulent cloud. The black-red points depict the locations and the mass of the sink particles. The yellow arrows show the direction of the radiation force. The magenta contours represent the distribution of energy contained in radiation. The simulation time is measured in units of the free-fall time of the initial spherical cloud, also known as the dynamical time.

Enough introduction, let’s welcome our super stars on stage! Figure 1 shows the structure of the gas cloud at different stages of its evolution. The highly clumpy and filamentary gas is clearly visible in all stages due to the turbulence in the gas. Stars are formed at the densest parts of the turbulent cloud, and the starlight pushes away the surrounding gas, stopping the growth of the stars later on in the evolution (bottom right panel).

To quantify the ability of radiation to control star formation efficiency, the authors repeated the simulation with six different values of gas opacity. Opacity represents the effective area capable of blocking light per gram of gas (units: area per gram, cm2 g-1). The higher the opacity, the stronger the light-gas interactions and hence the harder the light pushes on the gas. In this paper, the stellar radiation is assumed to be infrared and the opacity is assumed to be dominated by the dust grains mixed in the gas. 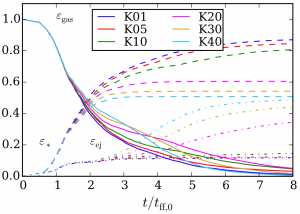 Figure 2 shows the time evolution of the fractions of the total initial mass ending up in stars (same as star formation efficiency), in the remaining gas, and in the gas ejected from the simulation box. With all opacity values, the first sink particles form at ~1 free-fall time, and by ~3 – 4 free-fall times they already gain most of their masses. Although the overall evolutionary tracks are similar, there is a clear difference in the star formation efficiency between models with opacity above and below ~15 cm2 g-1;. The high-opacity runs (K20 – K40) have similar star formation efficiency of ~50%, while the low-opacity runs (K01 – K10) convert more than 80% of the gas into stars.

The critical value of ~15 cm2 g-1 is much higher than what we observe in our Solar neighborhood. The take-home message is therefore “in order for infrared radiation to substantially limit star formation in super star clusters, a higher-than-typical dust content is required in the star-forming gas”. A possible explanation for this ineffectiveness in radiation driving is that radiation may take the path of least resistance and leak through low-density channels (instead of pushing against the gas). However, recent studies have found that the degree of such leakage depends on the accuracy of the numerical method in use, so cross-checking will be important. One thing we know for sure, we will see these superstars again!