From April 3rd to 6th, 2018, over 1,400 astronomers met at the European Week of Astronomy and Space Sciences (EWASS) in Liverpool, this year in conjunction with the National Astronomy Meeting (NAM) in the United Kingdom. From theory to simulations to observations, from outreach to software development, all kinds of news were spread. Astrobites was there! In this post, we give you an eclectic mixture of highlights of the week.

The doctoral thesis of Renske Smit focused on identifying and studying high-redshift galaxies. While many high-redshift galaxy studies are performed with Hubble, there are advantages to combining those observations with different data sets. Smit showed that the Spitzer telescope gave her studies a crucial perspective. She found some interesting galaxies which showed bright detections in the Spitzer 3.6 microns band, and none in the close 4.5 microns band. This disappearance act was hard to explain! At low redshift, Active Galactic Nuclei are known to display this feature, but they are not very abundant at high redshift. Eventually, a culprit was identified. Galaxies at high redshift with strong [OIII] emission can also show this behavior, since this line would fall in the 3.6 microns band. So much so, that 50% of galaxies in an extended sample she analyzed from CANDELS showed this behavior. What are the implications? This study has allowed to bridge the gap between theory and observations of high redshift galaxies by showing that our usual idea that the types of stars make up those galaxies is incorrect. Galaxies at high redshift must be forming many more stars per unit mass than we originally thought. Moreover, they must be emitting many more energetic photons than originally assumed, and these could have a large responsibility for reionizing the Universe. Inspired by the detection of strong [OIII] lines, which already gives significant information on the galaxy redshift, Smit led a successful campaign with ALMA to track the motion of gas in [CII], demonstrating they actually behave like disks, even at z~6! 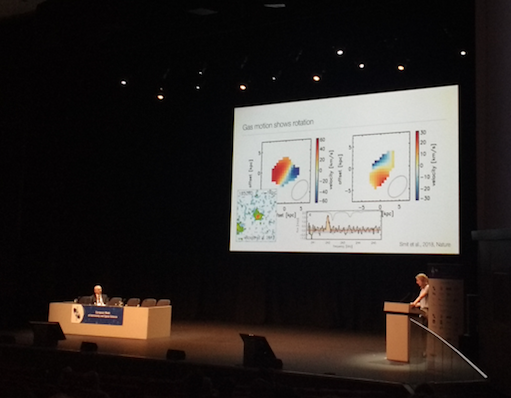 MERAC prize for observational thesis, 2018. Renske Smit (right, University of Cambridge) presents ALMA observations of high redshift galaxies, from which we learn that they have disk-like dynamics. Her work was featured in Nature recently.

Did you know that there are simulations of the Universe which start off with some tiny primordial perturbations in the gas and the dark matter which then grow to form galaxies as we see them today? It sounds like magic, but it is true. And there is not only one, but several of them! Joop Schaye, from Leiden University, is an expert on this type of simulation. In his talk, he gave us an idea of how this can be accomplished. The figure below summarizes the process. 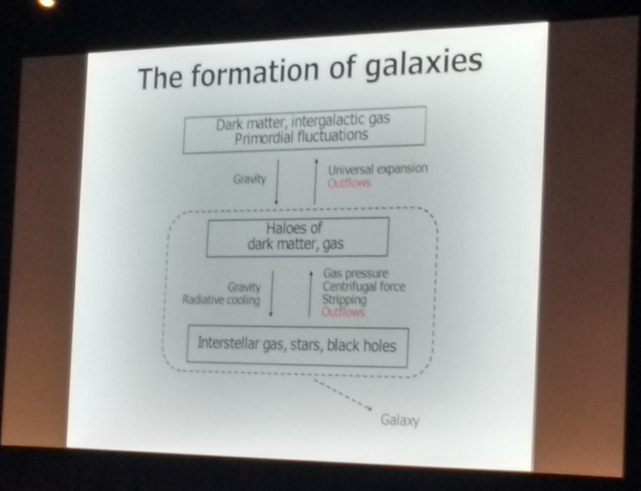 An overall schema of how, from the primordial density fluctuations in dark matter and intergalactic gas, realistic galaxies grow.

A cosmological simulation is a numerical box representing a small volume in our Universe. The initial conditions are typically set by current observational constraints from the cosmic microwave background. The ingredients of the simulation are dark matter and gas, initially. As time passes and gravity clumps the gas and dark matter together from the initial seeds of density fluctuations, stars and black holes also form. Radiation must be present at some level, since it is key to distinguish the behavior of luminous and dark matter. The simulations have a finite resolution in time, and also either in space or in mass. Due to this finite resolution, some processes are unresolved. Schaye gave an exhaustive list of these “sub-grid” processes, which are: the cooling and heating of luminous matter, star formation, stellar mass loss, galactic winds, the formation, accretion and mergers of black holes and the energy and momentum injected into the gas by Active Galactic Nuclei (AGN) in the center of galaxies. This last point is particularly tricky to model, and including it as part of cosmological hydrodynamical simulations has led to a revolution in making the galaxies formed more realistic. Why is this so?

Galaxies tend to be in a state of quasi equilibrium, where outflows and inflows of material are almost balanced. If we fail to model the right processes responsible for these flows, we do not have the ability to build realistic galaxies. Schaye showed that for low mass galaxies, the feedback from stars should considered, while for high mass galaxies, the feedback from AGN is more important. But even if we include models for feedback in the simulations, how do we know what strength they should have? How much energy and material do they need to input into the surrounding feedback? Schaye highlighted that typical recipes are inefficient, and advocated for calibrating them with available observations. He suggested that simulations that have different purposes should adopt different calibration strategies.

Schaye concluded his talk by presenting some of the results of the EAGLE simulation. One of the results he showed demonstrated an effect known as “assembly bias”, which is responsible for adding scatter to the stellar-to-halo mass relation. At fixed dark matter halo mass, galaxies that are more massive live in halos that formed earlier (from Matthee et al., 2016). This is only one among ~100 published measurements from the EAGLE simulation, which has led to a plethora of exciting new results for numerical galaxy formation.

Asteroseismology is the study of quakes in stars that allows us to probe stellar interiors. For many years, we have been aware of the existence of different stages in stellar evolution from tracking stars in the H-R diagram. Each time a star transitions between stages, oscillations set in. These oscillations can give us direct information about the stellar interior.  Aerts’ group has been making long-term contributions to this field by combining theory, simulations and observations, changing our view of stellar evolution.

As a star oscillates, its light curve (the light emitted as a function of time) changes. If we have a long stream of uninterrupted high-precision data mapping this light curve variation, we can look for specific features in frequency space. Some oscillations with a given frequency will be more prominent than others. Here is where theory comes in. Theoretical predictions for stellar quakes can be obtained by making small perturbations on the variables of the model (which ones; depends on your assumptions). These predictions can then be compared to observations, putting models to the test. For example, Aerts showed that our current predictions for the rotation of stellar cores, and even their magnetic fields, do not match current asteroseismology observations.  In the future, more data from the TESS mission (about to launch!) will help understand these discrepancies better.

Aerts also highlighted new applications of asteroseismology. With this technique, it is possible to estimate the mass and radius of a star. These are useful to researchers studying extrasolar planets via transients, as it allows them to understand the overall stellar system better. Another application is the ability to obtain a luminosity distance for oscillating stars. This application was verified with data from Gaia in the past, so the expectation is that this technique might allow us to probe further in the Galaxy in the future.

Finally, Aerts made some remarks on the sociology of our field. She stressed that progress is partly driven by its multidisciplinary. She highlighted the need to develop and promote open source software for astronomy. She also spoke about gender imbalance in our field and encouraged the audience to take action to address this issue. 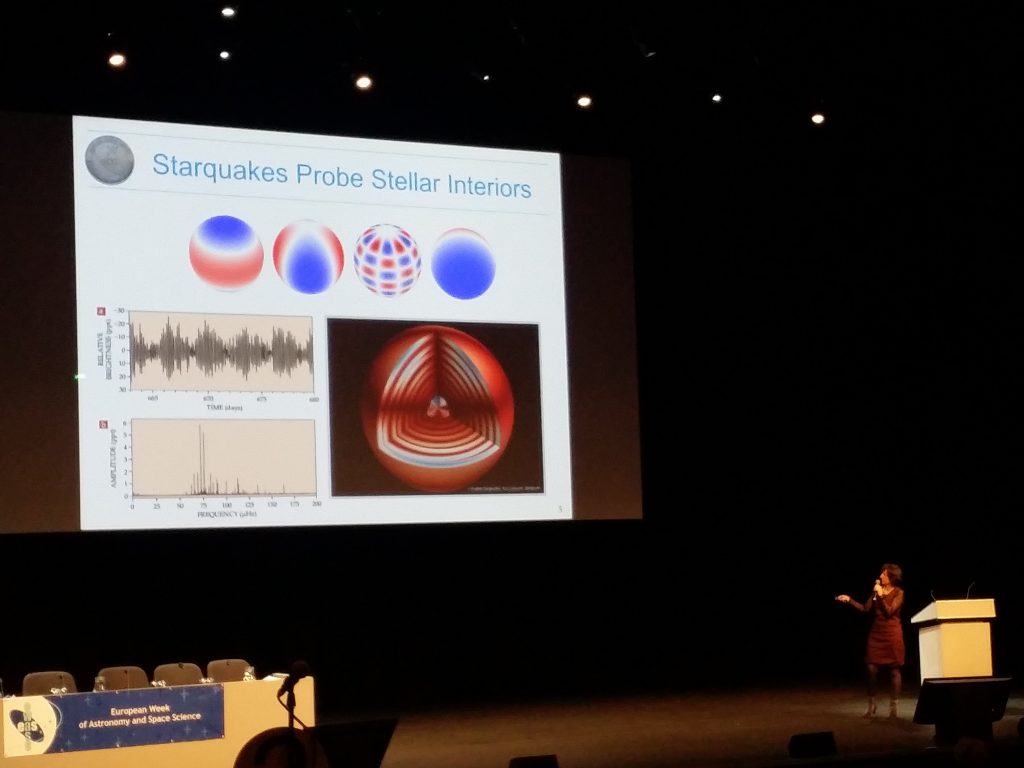