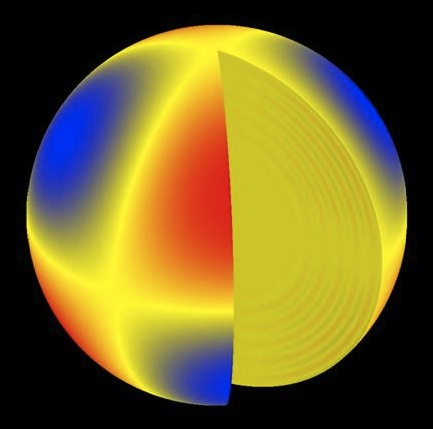 Asteroseismology refers to the study of stellar oscillations, which allows astronomers to probe the interiors of stars. From NASA/Kepler: http://kepler.nasa.gov/news/nasakeplernews/20101026webcast/

If there’s one type of star you’d think astronomers would know a lot about, it’s probably solar-type stars.  After all, humans have been staring at our very near neighbor for millennia and in the recent century have dedicated entire space missions to studying this archetype.  In introductory astronomy, freshman students learn the basic evolution of a solar-mass star: exhausting its hydrogen, expanding and cooling into the red giant phase, burning helium, losing mass.  But there is always more to be learned and new tools continue to open up avenues of study.

One such tool is asteroseismology.  Tony introduced this to us in a previous astrobite and I discussed how such methods can be used to look at Jupiter in new ways.  Briefly, asteroseismologists use stellar oscillations – driven by turbulence or gravity – to study the interior structure and composition of stars.  These oscillations give rise to signals at particular frequencies which can be detected with long-term photometric monitoring.  The study of these pulsations was not fully realizable until large, space-based missions such as Kepler and CoRoT began observing hundreds of stars with high sensitivity to changes in brightness.  This paper comes out of the Kepler mission.

Aguirre et al. focus their attention on just one type of star: one-solar-mass stars.  The idea of looking at only stars of the same mass is that any differences in the oscillations of these stars must be due to some property other than stellar mass; this is called “differential asteroseismology.”  The authors use two parameters for this investigation: the separation of detected frequencies and the maximum frequency detected. The frequency separation has been demonstrated to depend on the square root of the star’s density, while the maximum frequency is related to timescale over which the atmosphere changes.

The first question is: how do you know which stars have the same mass?  Mass can be measured from spectroscopy, but then models of stellar evolution are needed.  Instead, the authors go directly to the asteroseismic parameters of frequency separation and maximum frequency.  Relations between a star’s mass, radius and effective temperature, anchored on the well-studied Sun, have been worked out. Thus, given the star’s temperature, its mass and radius can be determined directly from asteroseismic observables, without the need for stellar evolution models.  72 stars out of the 2000 or so studied have a high probability of having a mass within 15% of the Sun’s; they form the sample for this work.

For the solar mass stars, the authors plot effective temperature against surface gravity.  These properties change as a star evolves, so the stars of different ages should land in different parts of the plot.  The stars identified previously as being solar mass (red squares in the figure) fall nicely along the model stellar evolution tracks – the paths such stars are expected to traverse as they age (curved lines).  The stars are also well-separated into two clumps, which can be identified with main sequence stars and the red giant branch.  The main sequence stars include stars like our Sun which burn hydrogen, while the more evolved red giant stars have exhausted their supply.

Some of the spread among the data in the temperature – surface gravity plot is accounted for by the range of masses included in the sample, but not all.  The authors infer that the remaining scatter is due to differences in composition, such as a star having fewer heavy elements (“lower metallicity“), a property which doesn’t change as the star evolves. You can see this in the figure below: there are two lines marked as one-solar-mass evolutionary tracks; the solid one is for a star with solar metallicity while the dotted one is for a lower-metallicity star.  Thus, this plot shows how stars of different mass and metallicity evolve over time, as represented by their motion in the temperature – surface gravity diagram.

In this figure, the surface gravities (called "log(g)") are plotted against effective temperature for stars with asteroseismic measurements. The red squares are those that were selected as being between 0.85 and 1.15 solar masses. The curves that traverse the plot are model stellar evolutionary tracks: the paths along which a star is expected to move as it ages. The stars in the sample do lie in the expected region of the plot, but there is some scatter that the authors infer is due to differences in chemical composition. Note the two tracks for a 1-solar-mass star: the solid line is for a star with a chemical composition similar to the Sun while the dashed line is for one with fewer heavy elements. Another noticeable feature is that the stars are divided into two groups; the lower, more populated group represents main sequence stars while the upper group consists of stars which have entered the red giant phase. Figure 2 from the paper.