As morbid as it sounds, astronomers often compare the study of core-collapse supernovae (SNe), the explosive deaths of stars, to an autopsy of a mysterious, new arriver to a morgue. We often don’t know a lot about the last days of their lives: if they had any partners, recent cases of rapid weight loss or exhibited any strange behavior. All of these factors can greatly affect what we do see: their final moments as luminous supernovae. We think that the stellar history of supernovae progenitors are the main reason why we see such a variety of SNe in the night sky, and we need to understand this history to paint a unified picture of core-collapse SNe.

In today’s paper, the authors follow a single type IIb supernova, SN 2013df, from explosion to long after its death (~600 days later). As a reminder, SNe are classified by their light curves and spectra; type IIb supernovae are those which first show weak hydrogen lines that become undetectable with time. A famous remnant of a type IIb SNe is Cassiopeia A, shown in Figure 1. 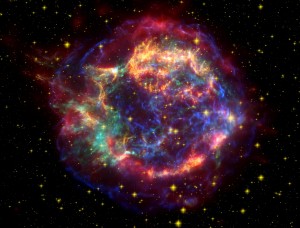 Figure 1: A false-colored image of the type IIb supernova remnant, Cassiopeia A. In this image, red is IR data from Spitzer; orange is visible light from Hubble; the blue and green data are X-rays detected by Chandra.

At late times, most supernovae will dim as the cobalt-56 produced in the explosion converts into iron-56. This radioactive decay has a very predictable light curve. However, in SN 2013df, the authors find something very surprising: the supernova actually dims at a rate much slower than predicted. This suggests that the supernova has some additional energy source.

We can look at the spectrum for clues to this mysterious energy. As shown in Figure 2, the H-alpha emission line significantly brightens at 600 days and has a distinctive “boxy” shape. This is consistent with the supernova interacting with its circumstellar medium (CSM). As the supernova blast hits a shell of dense CSM, it shocks the surrounding CSM and a reverse shock propels inwards towards the SN ejecta which is catching up to the shock. The H-alpha emission is from the unshocked SN ejecta irradiated by X-rays produced in the reverse shock. This thin-shell, high-velocity emission model will produce boxy emission lines, like the one we see in SN 2013df. 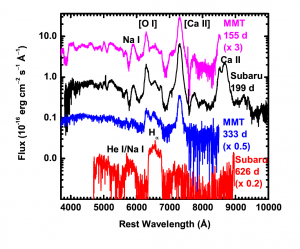 Figure 2: Spectrum of SN 2013df at different times. At 626 days after explosion, you can see the boxy H-alpha line emerge.

SN 2013df is not the first SN to show CSM interaction at late times. In fact, we are beginning to see the first hints of two classes of these explosions: those with more extended hydrogen-rich envelopes which have larger mass loss rates in its final days and those with compact envelopes with lower mass loss rates. This may seem contradictory to your intuition: if a star has a large mass loss rate, we would expect its hydrogen shell to be greatly depleted. So what’s going on?

The authors believe that these classes are actually in a continuum of possibilities which rely on these SNe having binary companions. Exactly when the progenitor begins to lose its hydrogen shell to its partner will affect the properties of the SN. In particular, the extended objects are just starting to lose their hydrogen shells at the time of explosion – which is why they have such high mass loss rates yet so much hydrogen. In contrast, the compact objects perhaps underwent substantial mass loss long before the progenitor decided to kick the bucket.

In the big scheme of SNe and their progenitors, it seems likely that binary partners play a substantial role in our understanding of these stellar detonations. Long term observational follow-up can help us both look for CSM interactions (as in the case of SN 2013df) and search for binary companions, if they exist.