Massive stars (i.e, those with masses greater than 8 solar masses) end their lives in energetic explosions. These core collapse Supernovae  (SNe) are caused by the stellar core, which is no longer supported by nuclear fusion, collapsing under its own weight. Observing these explosions  and their associated progenitors (e.g., before and after pictures) can increase our understanding of how these stars evolve.

Hertzsprung Russell diagram of the stellar evolutionary models with increased mass-loss rates. The initial stellar mass and mass-loss prescription is indicated near the tracks. The filled in circles represent the end points of the simulations. The right panel shows the zoomed in region where the end-points of the track lie. Black squares represent observational data of supernovae progenitors and the open red circles show the positions of observed red supergiants. 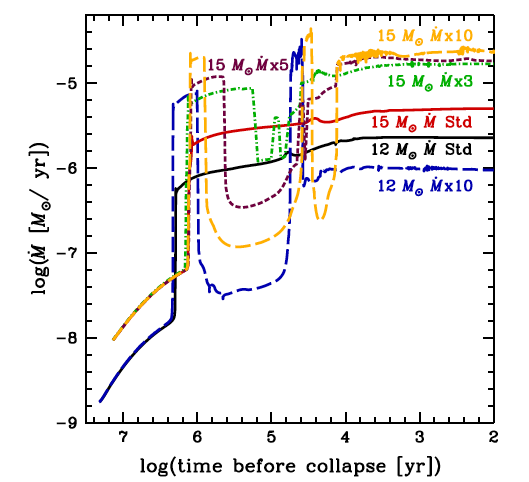 Mass-loss rates of the models as a function of time for the last million years of the stellar life.

Previous work has shown that an increased mass-loss rate will cause more hydrogen to be ejected from the envelope prior to the core collapse of the progenitor star, leading to a smaller remnant mass, higher effective temperature, and smaller hydrogen content in the ejecta for more massive stars (e.g., stars with initial masses greater than 20 solar masses). The author finds a similar effect for his lower mass models. As can be seen in the figure above, the stars with an inital mass of ~15  solar masses which have the increased mass-loss rates (green, purple, and orange tracks for the mass-loss rates increased by a factor or 3, 5, and 10, respectively) show a similar behavior: they all become hotter as they climb the supergiant branch, causing them to loop around the bluer region of the HR diagram (i.e, have a higher effective temperature) and end up as a yellow supergiant when they explode. They also find that the greater the mass-loss rate, the hotter the star will become as it evolves on the HR diagram. 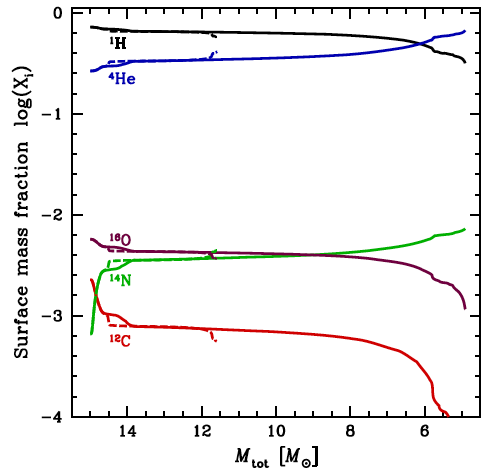 Logarithm of the mass fraction of certain elements (indicated by the labels) at the stellar surface as a function of the actual stellar mass of the star for the 15 solar mass star with the standard mass-loss rate (dashed line) and increased mass-loss rate (by a factor of 10) (solid line).

Looking back at the right panel of the first figure, we see that the end points of the models with increased mass-loss rates during the RSG phase end up as yellow supergiants before they explode. These positions agree with current observations of some peculiar SNe (black solid squares). The spectra and light curves of these SNe suggest that their progenitors must have an envelope with little hydrogen. As can be seen in the figure on the left, the models with the increased mass-loss rates (solid lines) lose more hydrogen from their surface as they evolve as compared to the standard mass-loss rate (dashed lines). The author thus concludes that RSGs with higher than expected mass-loss rates may be a possible progenitor for these types of peculiar SNe but how these high mass-loss rates are achieved remains an unanswered question.