Title: A Spitzer Survey for Dust in Type IIn Supernovae

Many astronomers have an ambivalent relationship towards “dust” in our cosmos. Not quite like what you may find at the back of your cupboard, astrophysical dust is really more like smoke, with particulates roughly micron-sized and composed of carbon, nitrogen, oxygen, silicon, and other things that astronomers broadly term “metals.” Dust is found in large quantities in the interstellar medium and even within our own solar system, where it causes the zodiacal light. Like the dust blanketing your soup cans, cosmic dust can be a nuisance–confounding measurements of stars and other objects behind the dust by extincting and reddening the light from the astrophysical object. A large number of astronomers only deal with dust because they want to know how to account and correct for it in their observations of background objects.

But, where does all of this dust come from? The study of dust formation and destruction is itself an intrinsically interesting field for study, and the last few decades have seen much progress in the study of dust, as laboratory work, interplanetary particulate gathering missions such as Stardust, and infrared observatories such as Spitzer have been able to finally bring to bear a wealth of data to learn just what exactly cosmic dust is and where it comes from. For an excellent reference on the interstellar medium and dust, check out Bruce Draine’s textbook, Physics of the Interstellar and Intergalactic Medium.

Some of the best candidate sites for dust formation include cool stellar winds from evolved stars, and in the aftermath of supernovae and novae. In their paper on the arXiv, Fox et al conduct an extensive survey of a particular type of core-collapse supernovae (IIn) with the Spitzer infrared space telescope to search for late time emission from dust. Type IIn supernovae are unique because they exhibit several narrow components in their spectral lines, leading astronomers to infer that they live in a complex circum-stellar environment (which is at slower velocities than the supernova ejecta). For more on how astronomers can infer velocities from spectral lines, see this post on P Cygni profiles.

However, there has been a perennial problem that in actuality supernovae do not produce enough dust as is expected. To give the punchline away, Fox et al find that most of the dust observed in IIn supernovae is best fit by a model where the dust was produced in an outflow from the massive progenitor star (such as a Luminous Blue Variable star (LBV)) and not in the actual supernova explosion itself. 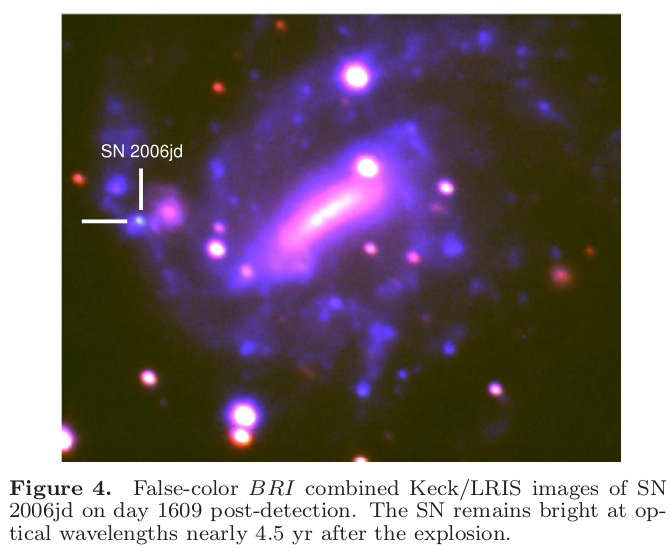 Mid-infrared (IR) observations are some of the most useful to provide constraints on the dust properties since warm dust (400-800 Kelvin) emits most strongly in these bands. Where is this dust formed and how is it heated to warm temperatures to emit in the IR? Although dust may have been formed in the actual supernova explosion itself, for example in the post-shocked gas between the forward and reverse shocks, pre-existing dust could also be a source of the observed IR emission. Pre-existing dust could be collisionally heated by the shocked gas or simply heated by the radiation from the supernova explosion itself–the optical light from the supernova is reprocessed down into the IR bands, warming the dust. Fox et al. propose several sources of the dust emission and examine the plausibility of each.

There are many tools in an astronomer’s toolbox that are useful for analyzing where the emission is coming from and what is truly going on in the aftermath of the supernova (see Figure 8). If new dust forms inside the supernova, then we would expect the dust to absorb more radiation from the redshifted tail (positive velocities) of a spectral line to geometrical considerations since, for our line of sight, the blueshifted material would already be in front of the dust and not be blocked by it. So, there is likely evidence of newly formed dust, but it is not enough to explain all of the IR emission. 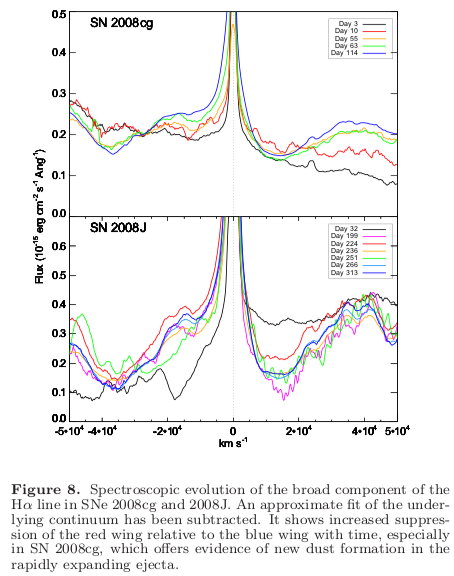 Fox et al explore many different models to explain the IR emission from the type IIn supernovae in their survey: