What happens to the most massive stars?

Really large stars eventually collapse because there is not enough radiation pressure to prevent the outer layers from falling in gravitationally. These stars then explode as Type II supernovae. Even more massive stars, between about 130 and 250 solar masses, are thought to lead to a pair-instability supernovae (PISN). In these stars, electron-positron pairs are created in the core. This leads the star to become dynamically unstable and leads to the collapse then explosion of these stars. This recent Astrobite has a more thorough explanation of the physics of PISN. These types of supernovae should be extremely luminous, much more than other Type II supernovae. At least, this is theoretical prediction: a pair-instability supernova has never been observed, though there have been a few candidates.

There have been previous models of PISN that show these stars evolve onto the Red-SuperGiant Branch before collapsing. However, these models have left out an important aspect of Red SuperGiants. Often, the hydrogen-rich outer envelope of the Red SuperGiant will begin pulsating. If the ratio of the luminosity of the star to the stellar mass is large, these pulsations can become unstable and lead to significant mass loss. The authors investigate how these pulsations evolve over time. More specifically, they want to know if these pulsations can lead to the star losing mass and if so, how this would impact observations of these type of supernovae.

What does these new models tell us? 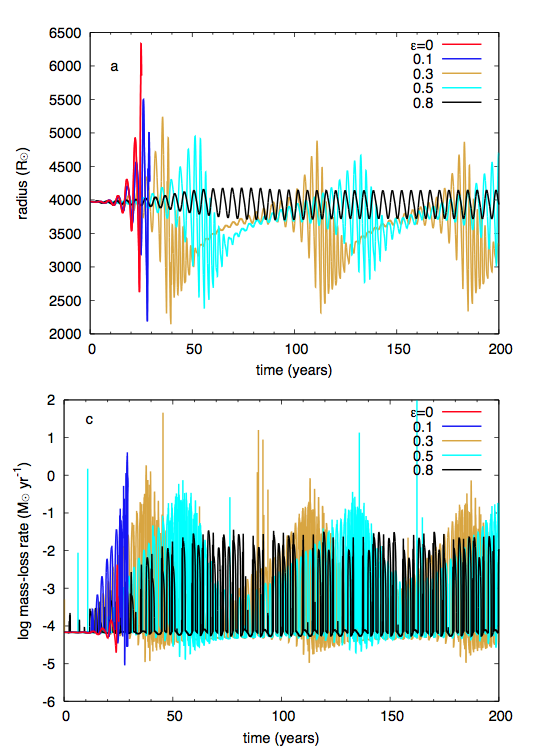 Figure 1: The radius and mass-loss rate of multiple stellar models over 200 years. Epsilon is the fraction of the kinetic energy gained from the pulsations that contributes to material from the star being expelled from the surface. The top plot shows the radius as a function of time, but can also be thought of as showing how the pulsations evolve over time. The y-axis on the bottom plot is the log of the amount of mass lost per year, measured in solar masses. Manner A (Black) shows an exponential increase in the amplitude, then constant. Manner B (Brown and Cyan) show a quick increase in the pulsations followed by damping. Manner C (Red and Navy Blue) show continued exponential growth of the pulsations.

The evolution of the pulsations affects the mass loss rate. The black curve shows what happens when the pulsations increase then become constant (A). Brown and Cyan match repeated growth and damping of the amplitudes (B). Red and Navy Blue correspond to when the amplitude continues to grow exponentially (C). All of these models show the pulsations can lead to a mass-loss rate of around 0.01 solar masses per year. This is significant compared to previous results, which assumed zero mass lass, and changes what astronomers expect to see observationally.

How can astronomers test these results?

If PISN are losing significantly more mass than previously thought, the environment around the star will be very dense. The presence of this material will change what astronomers observe if they ever see a PISN. This environment will cause these supernovae to be bluer and brighter than previously thought. As the energetic ejected material from the supernova hits the surrounding material, this material is heated and photoionized, which causes more brightening. It has long been thought that the earliest supernovae in the universe did not suffer much mass loss and exploded in regions without much circumstellar material. This result means it should be possible to observe these supernovae at higher redshifts than astronomers thought, which has implications for determining distances in the universe.