Supernova explosions are among the most energetic and violent events in the Universe, and represent the dramatic end stages of old stars. It is well known that massive stars end their lives in a Type II supernova explosion, which involves a rapid core collapse and a violent expulsion of the overlying envelope of gas.

While supernovae display a plethora of interesting physics on their own, they are also useful in determining extragalactic distances. In this paper, the authors use the expanding photosphere method (EPM) to map the distances of eight Type II supernovae and their respective galaxies. This method provides an estimate of cosmological distances independent of other techniques in the extragalactic distance ladder. By measuring the expansion velocity of the supernova and its angular size over time, one can make a distance determination using the EPM.

The authors perform this analysis on eight different Type II supernovae, which were selected based on the availability of photometric and spectroscopic data collected from the literature. These explosions are observationally constrained within a day’s accuracy. The photometric light curves of Type II supernovae are characterized by a fast rise, a plateau resulting from the cooling of shock-heated ejecta, and a decline powered by radioactive decay of heavy elements (Fig. 1) The EPM method works best for data early in the explosion, up to 50 days after the initial expansion. To obtain the photospheric expansion velocities, the authors fit iron and helium spectral lines to a P Cygni profile (a characteristic spectral feature of an expanding shell of gas). 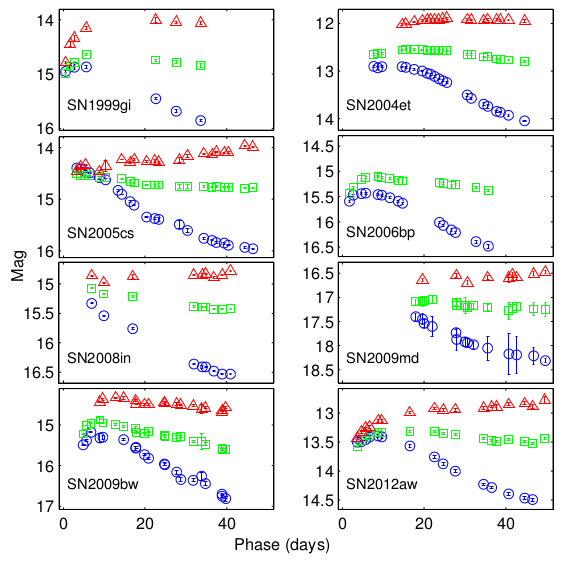 From the photometric data, the authors measure the angular sizes

of the supernovae as a function of time over three optical filters. The expansion velocities

are obtained using corresponding spectroscopic data. To get the distance, one simply plots the time vs.

and take the slope of the resulting line to get distance (Fig. 2). 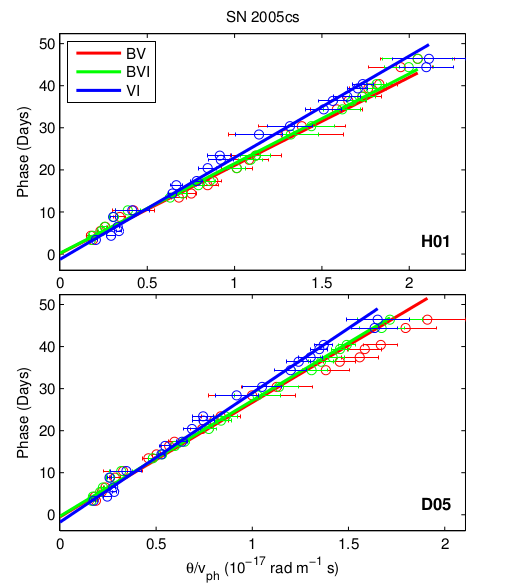 for one of the supernovae. The slope of these fits yields the distance, which are mutually consistent between each filter.

For each supernova, the authors derive the distance in each of the different filters and take the average to get a final value. The values over all the filters are mutually consistent with each other. Even so, there are several sources of systematic error that lead to uncertainties in the final distance determination. One major source of error is the dilution factor, which is a correction factor introduced in calculating the angular size of the supernova photosphere (which is not a perfect blackbody). The authors calculate distances using two different models for the dilution factor, but adopt the one that yields distances consistent with previous measurements found in the literature. The interstellar extinction in each band (taken from the literature) is also very difficult to determine, and introduces another source of systematic error. Additionally, the expansion velocity has a random error of a few percent.

The resulting set of distance measurements for these supernovae is consistent with the results from other distance measurement techniques using Cepheids, the Tully-Fisher relation, surface brightness fluctuations, etc. This consistency is a reassuring check of the reliability of extragalactic distance measurement techniques and their resulting values. Additionally, the EPM is a relatively simple and physically motivated approach for determining distances, while other methods usually utilize  correlations between properties (ex. a galaxy’s rotational velocity vs. luminosity) to infer distances. These correlations often involve underlying assumptions that are not always clearly justified, but the EPM offers a more transparent approach.