One of the current challenges in supernova theory is explaining the mechanisms behind extremely luminous supernovae (SNe). While SNe are already some of the brightest events in the observable Universe, there exist types of supernovae that are unusually bright, and these are difficult to explain within the canonical supernova model.

It is believed that these extremely luminous events can be powered by very strong ejecta colliding with the medium surrounding the SNe. Another mechanism by which SNe can be abnormally luminous is by the radioactive decay of 56-Ni. All SNe produce emission via 56-Ni decay, however some (with 130+ solar masses) have such large amounts of 56-Ni that they produce an emission excess. Few stars are massive enough to produce the observed excess however, so this is unlikely to be the main cause of the ultra-luminous SNe. Although stars can be born with such large masses, many lose mass quickly through binary star interactions and radiatively driven winds.

One type of SNe is called a pair-instability supernova (PISNe). In these events, the carbon/oxygen (CO) cores of extremely massive stars are at such a high temperature that electron-positron pairs are produced. This results in a drop in radiation pressure, which then causes core contraction and explosive nuclear burning that produces a shock wave destroying the star. PISNe are expected from Population III stars, which are extraordinarily massive stars formed in the very early Universe.

In this paper, the authors numerically simulate the emission produced by PISNe. In particular, the paper details the effects of rotation on the luminous output of these events, whereas previous papers modelling PISNe have largely neglected rotation. One effect of rotation is that rotationally-induced mixing can shift the lower mass limit of PISNe to lower values, thereby enhancing the likelihood of a PISN occurring. This mixing homogenizes the star’s interior composition and enhances production of carbon/nitrogen/oxygen during the red giant phase of a star’s lifecycle, which in turn generates larger cores. On the other hand, rotation can also drive mass loss from a star’s outer layers, which can decrease the probability of a PISN occurring. The authors run these hydrodynamic and radiative transfer simulations for a range of different progenitor masses (90-300 solar masses) and varying degrees of metallicity. 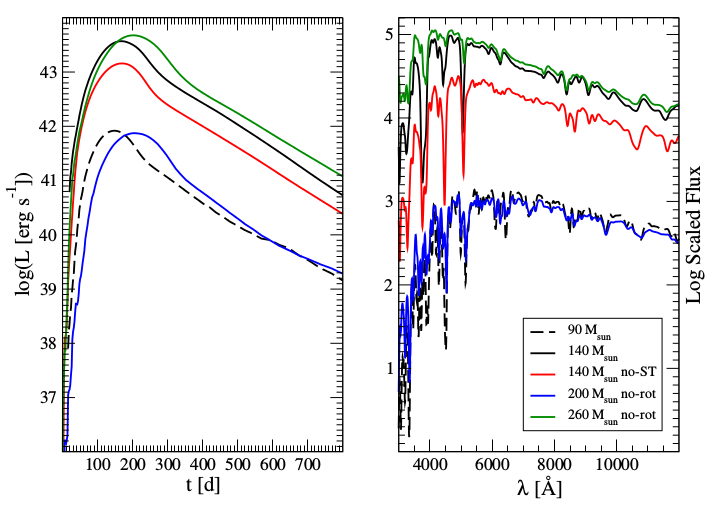 Fig. 1: Light curves (left) and spectra (right) of PISNe originating from progenitors of varying masses. “No-rot” indicates progenitors that are not rotating, and ‘no-ST” indicates a lack of a magnetic field. Even for rotating stars, the surface temperature is high enough to keep elements such as C,N and O ionized, so we do not see strong spectral lines from these features even though mixing is presumed to occur.

The computed spectra seem to agree with those done by other papers. These spectra and light curves also reproduce the main features (ex. peak luminosity) of the super-luminous SN2007bi, but discrepancies between the predicted and observed spectra (particularly in the later epochs of its time evolution) seem to suggest that this event not a PISNe. Generally, the simulated PISNe seem to have redder colors and different spectral features compared with observed super-luminous SNe.

One major difficulty in drawing conclusions from these simulations arises from the fact that these spectra are often degenerate with respect to metallicity and rotation rate. That is, different metallicities and rotation rates for progenitor stars seem to yield very similar spectra. There also appears to be some degeneracy between the spectra of rotating and non-rotating star as well.

Since the Population III progenitor stars massive enough to result in PISNe are only expected to form in the very early Universe, we need more observations from these early epochs to test our PISNe models. Currently, these Population III stars are still hypothetical and have not yet been directly observed. However, the future JSWT and WFIRST missions, which are planned to observe the earliest stars, should provide us with more information on these objects.