Transit observations of an exoplanet can give us a lot of information about the planet, such as its radius, orbital period, and even the composition of its atmosphere (when combined with spectroscopy). But now new modeling indicates that we can even study the magnetic field of the host star using transits!

A transit occurs when an exoplanet passes between us and the host star. The planet blocks a small amount of light from the star, and we see a dip in the light collected by our telescopes. In some cases, the transit seems to start too early, as if something were orbiting the star just ahead of the planet, and blocking some of the light from the star. This “something” could be a bow shock, a curved shock wave created where the planet’s magnetic field interacts with the stellar wind of the star. See Fig. 1 for an illustration of how a bow shock can create an asymmetric transit light curve.

The amount of light blocked by the bow shock will change as the planet moves through a variable stellar wind. By studying the transit light curves, we could map out the different regions of stellar wind. The authors previously investigated the relationship between stellar wind and transit light curves in the WASP-12 system and presented their results at the IAU Planet Formation Symposium. In this paper, they improve on their model and apply it to a different planetary system, HD 189733.

The authors start with maps of the magnetic field of the star, based on data collected by the Canada-France-Hawaii telescope in June 2007 and July 2008. They use this maps to create a model of the stellar winds around the star at each time. Next, they model the bow shock created as the planet passes through the stellar wind. Finally, they simulate the light curves that would result from the planet and bow shock orbiting in front of the star. The angle at which the stellar wind hits the planet can change the strength of the bow shock, so the authors ran the models multiple times, trying the strongest and weakest possible bow shocks, as well as an intermediate bow shock. The results are shown in Fig. 2. 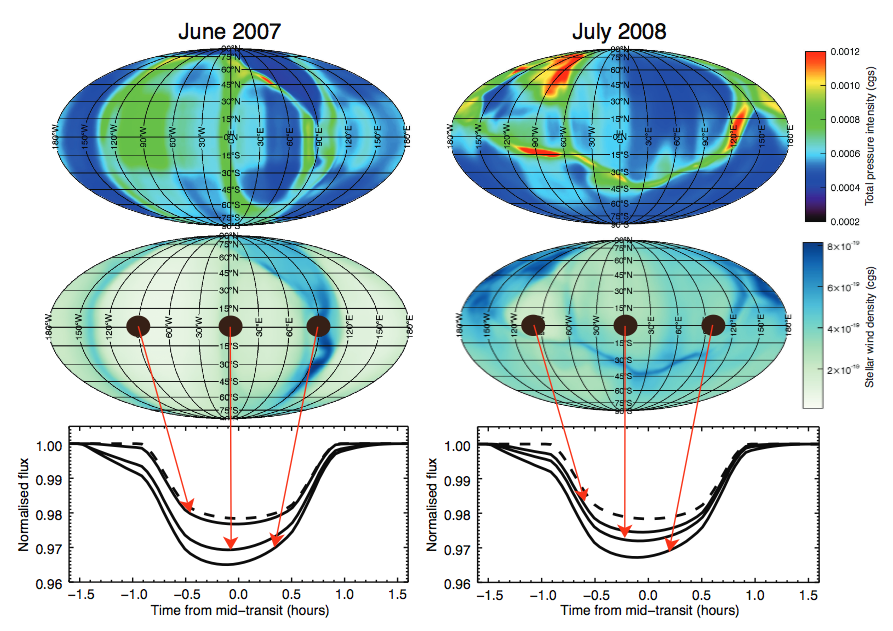 Fig 2: Top row: Map of the total wind pressure around HD 189733 based on data taken in June 2007 (left) and July 2008 (right). Middle row: Map of the wind density around HD 189733 at the two epochs. Bottom row: Model transit light curves at each epoch. The dashed lines indicate the models without a bow shock. The three solid lines in each plot show the light curves for the strongest, weakest, and one intermediate bow shock.