Introduction: Blue Straggler Stars
Blue stragglers are curious stars that have been identified in both globular and open clusters.  They are curious because it is possible, making only a few small assumptions, to come to the paradoxical conclusion that they should not exist.

Allow me to explain.

We understand stars decently well.  They spend most of their lives burning hydrogen in their cores.  While doing so, they lie in a distinct band (the main sequence) in a plot of temperature and luminosity (the HR-diagram).  More massive stars lie at higher luminosities and they also use up their hydrogen fuel and evolve off the main sequence in shorter periods of time.  Now, unlike many galaxies, where star formation is continuous, in clusters all the stars form at roughly the same time.   As the cluster ages, fewer and fewer of its stars will be found on the main sequence.  If you were to plot the stars from a cluster on an HR-diagram you would see a truncated main sequence.  The location of this “main-sequence turn-off” can reveal the age of the cluster.  If all stars in a cluster were to proceed through their lives the way models of single star evolution tell us they should, there should be no stars above the main sequence turn off. That portion of the HR diagram should be empty.

But it isn’t.  Handfuls of blue stars which lie above the turn-off have been found in numerous clusters.  These are the blue stragglers. 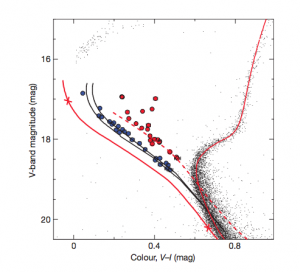 So what are these stars?  Their location on the HR diagram implies that they have a particular mass.  But, if they had been born with that mass then they should have already evolved off the main sequence.  Therefore, they must have gained additional mass recently.  Two main mechanisms for this have been proposed: (i) mass transfer within a binary system and (ii) the merger of two (or more) stars.  (For more on formation mechanisms check out Chris’ astrobite.)

Binaries (including interacting binaries) are common in the universe.   And while stellar mergers may have a low probability of occurring in, say, the solar neighborhood, globular clusters are very dense environments.  In fact, there is evidence that some globular clusters have undergone a process called “core-collapse”. This is a runaway contraction of the core during which mergers become increasingly probable.  Thus, it is likely that (at least in globular clusters) both mechanisms contribute to the overall blue straggler population.  However, open questions still remain: is one mechanism dominant over the other? Is blue straggler formation an ongoing process or is it triggered by a particular event in the history of the cluster?

A Previous Clue: The Blue Stragglers of Globular Cluster M30
In 2009 Ferraro et al. (Nature, 462, 24) used the Hubble Space Telescope to examine the blue straggler population in the globular cluster M30 (which is thought to have already experienced core collapse).  They found something interesting. They identified two parallel, but noticeably distinct, bands of blue stragglers on the HR diagram of the cluster (see Figure 1).  They found that the bluer sequence of objects was well reproduced by models of stellar mergers while the red sequence more closely matched models for binaries which are currently undergoing mass transfer.  The two bands contained roughly comparable numbers of objects.  Interestingly, it is predicted that as the stars continue to evolve over a few more Gyr the two populations should move to fill the gap between the two sequences.  The fact that the two populations are distinct implies their formation was likely due to a specific event as opposed to an ongoing process (if it were ongoing, some of the blue stragglers should be more evolved which their models predict should lie in between the two sequences).  The authors hypothesize that their formation was triggered by the core collapse of the cluster.

This Work
In today’s paper, the same group identifies another globular cluster, NGC 362, as the second case where two distinct bands of blue stragglers are visible.  The population is similar to that identified in M30.  Several important points from the paper include:

Together these results are adding important clues to the puzzle of blue straggler stars. 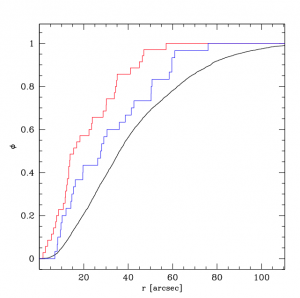 Figure 3: Radial distribution of the general cluster stars of NGC 392 (black), the blue blue stragglers (blue), and the red blue stragglers (red). The vertical axis is the fraction of stars which are located within that radius. 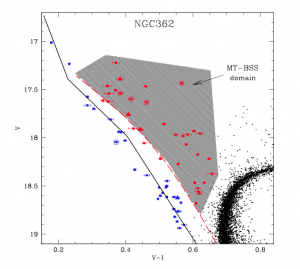 Figure 2: Zoom in of the blue straggler portion of the color-magnitude diagram for NGC 362.