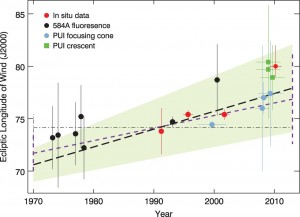 Observations of interstellar neutral helium atoms collected over the past 40 years point to changes in the Sun’s local Galactic environment. From Figure 1 of Frisch et al. (2013).

Douglas Adams, fans of the Hitchhiker’s Guide to the Universe series will recall, warned us about 30 years ago that “eddies in the spacetime continuum” (he is?). Now, Frisch et al. report in a recent paper in Science that they may have found evidence that these eddies (okay, eddies in the interstellar medium) really exist. Amazingly, they made this discovery using data collected way back before Adams’ books even came out.

Their study was prompted by the recent success of NASA’s IBEX mission in measuring the velocities of neutral helium atoms from the interstellar medium as they pass through our Solar system. They use these velocity measurements to study the interaction between our local interstellar medium, the cloud of gas within the Milky Way galaxy that we call home, and the heliosphere — the Sun’s sphere of influence within that medium. Ultimately, they measure an angle (λ) that represents the Sun’s direction of motion within that cloud.

Adding the IBEX results to other measurements from 11 different spacecraft that have operated over the past 40 years, Frisch et al. look for trends in λ over time. They show what they found in the figure at left. It seems that the Sun’s direction of motion relative to the local interstellar medium has significantly changed (by about 7 degrees) in just 40 years. 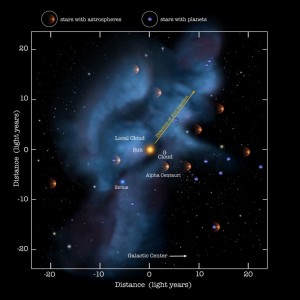 The Sun’s direction of motion within the local interstellar cloud. Artist’s rendition courtesy of NASA/Adler/UChicago/Wesleyan.

So what does this mean for the Sun, and what does it tell us about our Galactic neighborhood? It’s important to remember that 40 years is really just a blink of the eye in Galactic terms. As illustrated in the figure at right, the characteristic size scale for clouds in the interstellar medium is tens of light years, whereas the Sun only moves at about 23 km/s. That means that it traverses only a few thousandths of a light year through the interstellar medium over the course of 40 years. We’ve hardly changed Galactic addresses in that time — we’re encountering some sort of smaller scale disturbance within our local neighborhood.

Frisch et al. identify turbulence in the interstellar medium as a possible culprit. We know that turbulence is common in astrophysical fluids, and Frisch et al. use back of the envelope calculations to demonstrate that turbulent eddies in our local cloud would produce disturbances with a typical angular scale of about 8 deg — just about the size of the change they’ve measured in 40 years of neutral helium data.

But we’ve only just begun to collect the data really needed to study long-term changes in the interaction between the Sun and the local interstellar medium. The authors discuss a variety of caveats: after all, they’ve combined results from 11 instruments that used a diverse set of observational methods, and the analyses that were used on past missions aren’t always identical to modern approaches. Their results suggest a real change in the angle λ, but the linear model they fit is essentially just a sneak peak at the true shape of the Sun’s trajectory, and it’s hard to completely rule out systematic effects that could have produced this trend artificially.

Perhaps in another 40 years, with data from another 11 or so spacecraft, we’ll be able to track the Sun’s slow progression through the whorls and eddies of the local cloud with more certainty. Or perhaps we’ll find that the trend identified by Frisch et al. is due to another process alltogether.

Where the Solar System Ends