Detecting neutrinos is hard. They’re electrically neutral and light-weight, so they’re barely affected by anything. Neutrinos are so elusive, in fact, that if a bunch of them were passed into a block of lead one lightyear in length, half of them would emerge on the other side having not hit anything during their flight. This makes neutrinos great messengers; they bring with them a wealth of information that is not accessible through optical observations. Unfortunately, that blessing is also a curse. After all, how does one capture something that was sly enough to escape from the center of a supernova?

The answer is to either build a detector that is very large or very dense (preferably both) and to be very patient. But, that can get expensive real fast, so some neutrino telescopes have found a way to use a naturally occurring resource that makes for a great neutrino detector: water. One of those telescopes is called ANTARES (Astronomy with a Neutrino Telescope and Abyss environmental RESearch). The goal of ANTARES is to detect neutrinos from high-energy astrophysical sources. The data it collects could be used to probe a wide array of astronomical phenomena. 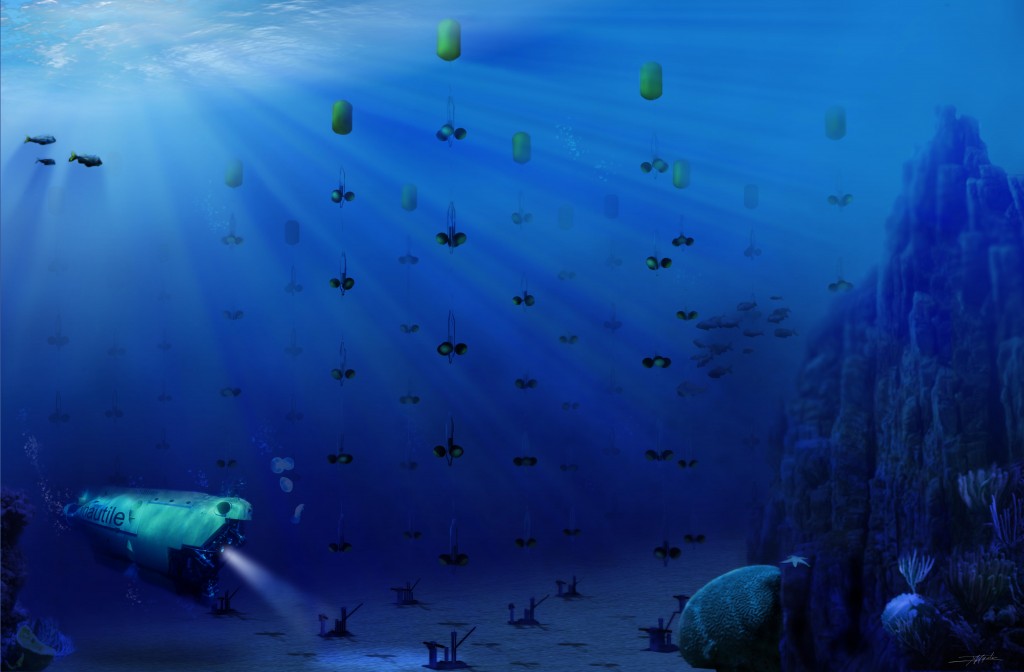 ANTARES is located 2.5 km below the surface of the Mediterranean Sea near the French coast. This is an artist’s impression. (source: ANTARES Experiment)

Water is an effective and inexpensive detection medium for neutrinos. When a neutrino interacts with a charged particle in water, one of two things can happen. Either the neutrino bounces off the particle, imbuing it with momentum  (called a neutral-current interaction) or the neutrino is absorbed by a nucleus and a lepton (electron, muon, or tau) is produced (called a charged-current interaction). In both cases, the result is a charged particle that leaves the interaction with a high velocity. Often, the velocity of that charged particle is larger than that of light in water, which generates Cherenkov radiation–a bluish light that is in many ways analogous to the sonic boom that accompanies objects moving faster than the speed of sound in a medium. This light can then be easily detected.

ANTARES consists of twelve vertical strings equipped with light detectors called photomultiplier tubes (PMTs) sitting on the floor of the Mediterranean Sea off the coast of France. The light produced by the products of the neutrino interaction expands in a cone from the location where the interaction took place. Having many PMTs allows the experiment to see the light from different angles and reconstruct the origin of the light cone, indicating the location and direction of the neutrino when the interaction took place.

ANTARES has been collecting data since 2007 and expects to continue through 2016. The scientific goals of the experiment, apart from acquiring lots of insightful data about high-energy neutrinos, are rather vague. For example, they are currently searching for a correlation between observed neutrinos and gamma ray bursts (GRBs). GRBs are very energetic events and are likely to produce a wealth of neutrinos that may be detectable here at Earth. So far, their analysis has not revealed any correspondence.

Another project the experimenters are working on is searching for point sources of these cosmic neutrinos. The goal would be eventually to construct a map of the “neutrino sky”. Unfortunately, their observed neutrino sources seem to be spread evenly over the sky, but as the data set grows, perhaps some interesting features will begin to reveal themselves. All in all, the goal for the experimenters right now is just to collect that data. Once they have all the data, they can focus on using it to further investigate a wide range of astrophysical phenomena.