KOI 2700b is a planet with an identity crisis: it thinks it is a comet.

Orbiting its host star once every 22 hours, this planet is extremely hot and continually blasted with high-energy particles streaming from the stellar surface. Dusty material is stripped from the planet and blown out behind it to form a huge, comet-like1 tail. KOI 2700b is a transiting exoplanet candidate; its host star, observed by the Kepler spacecraft, shows periodic dimmings as KOI 2700b passes in front of (transits) it, blocking a little of its light once every orbital period. A plot of stellar flux versus time, the ‘transit light curve’ is shown in figure 1. 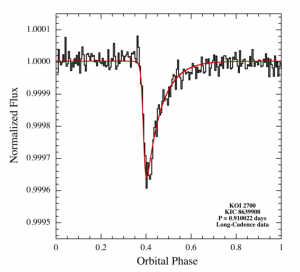 Figure 1: The transit light curve of KOI 2700b. The asymmetry hints at the presence of a dusty tail that continues to obscure part of the star long after the planet has finished transiting. The red line is a model that has been fit to the data.

The sharp drop in flux at the beginning of the transit is produced by the solid, opaque, leading edge of the planet as it passes in front of the star. The gradual rise back to base level during the latter part of the transit indicates that some extended, optically thin (translucent) cloud of material trails the planet. This scenario is not totally unheard of: another planet candidate, KIC 1255b, shows the same asymmetric transit feature which has also been attributed to a dusty tail2.

Since this transit light curve is so odd looking, it is worth asking whether some contamination or systematic effect could be responsible for the observed asymmetry. The authors rule out this possibility by applying point spread function (PSF) photometry. Instead of simply summing all the photons that fall within a certain aperture, as is customary Kepler procedure, the distribution of star-light on the detector is modelled – see figure 2. By modelling PSFs, signals from multiple stars falling on nearby regions of the detector can be separated. Another, brighter star lies close to KOI 2700b on the sky and this technique allows the authors to say very confidently that the signal comes from the target star and not this bright neighbour. 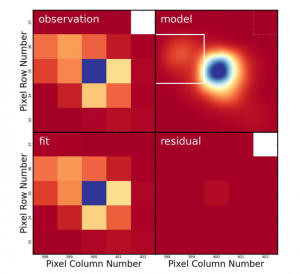 Figure 2. Top left: the Kepler pixel image of the target star and brighter companion. Top right: the PSF model of the two stars. The brighter star is at the centre, with the much fainter target star to its top left. Bottom left: the PSF model binned to the Kepler pixels. Bottom left: the residuals of the fit (observation – model). The smooth, uniform residual indicates that the model provides a good fit to the data Brightness is shown in colour – blue is bright and red is dim.

The amount of star-light blocked by the planet’s dust tail gradually decreases as the planet travels along its orbit, after transiting, as dust particles disperse and get broken down by the intense stellar radiation.

Rappaport et al model the path of each particle after it is ejected from the planet’s atmosphere. Once released, particles are subjected to two opposing forces: a radiation-pressure force produced by the stellar wind, and a gravitational force produced  by  the planet. Particle trajectories depend on the ratio between these two forces, β, as shown in figure 3. The path followed by a particle during the first 19 hours after ejection is shown in the left-hand plot of figure 4 for different values of β. The right-hand plot of figure 4 shows the same thing but for smaller values of β, i.e. where the gravitational force is much more dominant than radiation-pressure force. In this plot particle trajectories are tracked for 20 orbits of the planet.

In the right hand panel of figure 3, different values of β can also be thought of as representing different particle sizes: small particles will be more strongly influenced by radiation pressure than by gravity and vice-versa for large particles. The flower-petal-like features are produced because, for large β, particles cannot escape the gravitational influence of the planet and stay in orbit around it. They trace out these geometric patterns as they orbit the planet whilst it orbits the star. For a range of dust particle sizes these patterns will be washed-out. Particle density is therefore assumed to be constant over the part of the dust tail that is relevant to the asymmetric transit profile so these features would not show up in the transit light curve.

Physical interpretation of the light curve

An ‘asymmetric hyperbolic secant’ function. F0 is the star’s normal brightness level, C is the transit depth, θ0 is related to the time of central transit, and θ1 and θ2 describe the characteristic angles of the ingress and egress3, respectively.

The authors fit a mathematical function called an ‘asymmetric hyperbolic secant’ to the transit light curve (see equation right). Although this is a mathematical function, i.e. not physically motivated, some of its parameters can still be interpreted physically. In particular the lifetime of dust particles can be inferred from the parameter describing the shape of the gradual rise in brightness at the end of the transit. The time for which a dust particle survives before it is vaporized by the stellar radiation is calculated to be ~ 0.4 – 3 days. From this characteristic lifetime the authors deduce that the dust is likely to be made from pyroxene or crystalline olivine, both abundant minerals on Earth. Adding an actual planet – an opaque sphere at the leading edge of the dust cloud – into their transit model produces very little difference to the fit: the planet is so small compared to the huge tail, adding it only negligibly changes the transit light curve model.

Previous studies show that dust tails like this can only be produced on planets with a molten, lava-like surface and a high pressure atmosphere that is full of vapours which condense into dust particles as they leave the planet. Such a planet must also have low surface gravity so that dust particles can easily escape. Surface gravity is related to the mass and radius of a planet and so the authors indicate, based on the observed rate of particle escape, that this planet is likely to be somewhere between moon and mercury-sized.

Given the rate of mass lost by this little planet to its dusty tail, how long can it be expected to live? The authors suggest a lifetime of ~100 million years based on the mass-loss rate of previously detected comet-planet KIC 1255b. By astronomical standards 100 million years is a very short time; Kepler was lucky to capture KOI 2700b’s bizarre transit signal during its fleeting existence.

1Whereas comets are icy, relatively small objects that occasionally enter the inner solar system and produce beautiful tails of gas and dust, this planet is much larger, on a permanent, close-in orbit and certainly too hot to be icy. Comet tails in our own solar system are produced in a similar way to this planet’s tail – material streams away from the comet, dragged by the solar wind.

3Ingress and egress are terms used for the passage of the planet across the edge of the star at the beginning and end of the transit respectively.