Just about every physics and astronomy textbook in existence contains a neatly formatted table of physical constants. These numbers are usually taken to be immutable parameters of the Universe, and we base all of our physical calculations on this assumption. We then might ask ourselves, are these fundamental constants actually static across time? That is, have the values of these constants remained the same between now and the early ages of the Universe?

To investigate the possibility of these constants being time-varying parameters, we have to make observations of physics happening in the past. Fortunately, this is possible due to the finite speed of light, as any observations of distant astronomical objects manifest as observations looking back into an earlier time in the Universe. Any variations in the fundamental constants of nature should produce observational signatures inconsistent with our present day knowledge of physics, and this should yield different values for physical constants from our experimentally determined ones.

,  is a dimensionless quantity describing the strength of the electromagnetic interaction. Remarkably, the agreement between the experimentally measured value of

with its theoretically predicted value from quantum mechanics agrees within one part in 10 billion. This stringency in agreement represents one of the most remarkable successes of theoretical physics, and is analogous to predicting the distance between Los Angeles and New York and being correct within hair’s width.

The authors take spectra from quasi-stellar objects (QSOs, or quasars) to probe variations in

. QSOs are extremely luminous and distant galaxies with active galactic nuclei, and represent some of the most distant objects in the observable Universe. Specifically, the authors make spectral observations of the [O III] emission line to measure variations in

. The [O III] line is a common feature of QSOs resulting from doubly ionized oxygen, and is characterized by a doubly peaked emission at two closely spaced wavelengths. An observation of a QSO with a given distance and redshift corresponds to a particular time earlier in the Universe, so this allows us to make measurements across a wide span of cosmic history if we observe a collection of targets.

The paper uses data from the Sloan Digital Sky Survey, from which a sample of QSOs are analyzed after passing a set of selection criteria. The objects of interest are selected based on the quality of their [O III] emission line. For very high redshift objects, this line lies in a wavelength regime that can be potentially contaminated by other emission lines from the sky. Additionally, the authors select objects whose [O III] emission has a strong signal-to-noise ratio, separate and well-defined peaks, and no contamination from neighboring emission lines from other elements. The final selection of QSOs contains 2347 objects, and this large sample helps eliminate any significant sources of systematic errors.

from a QSO spectrum, the authors determine the wavelength difference between the two emission peaks of the [O III] line and check for any significant changes of this separation with time. The best-fit line of

versus the lookback time shows that there is no significant variation over the past 7 billion years within an accuracy of 10 parts in a million (Fig. 1). This result is consistent with previous measurements based on the same method, and also presents an improvement in precision due to the larger sample size. While this suggests that the fine structure constant lives up to its name, there is still some speculation that 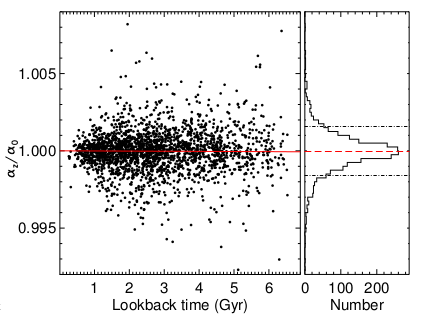 Fig. 1. Left: A comparison of the measured fine structure constant to its laboratory value across a range of lookback times. The results are consistent with a constant that remains static over the past 7 billion years. Right: A histogram of this ratio, with the mean being