Are you encountering a polar vortex? If so, stay warm and keep up with AAS from the comfort of your computer screen! (If not, you can stay too!) Once again, Astrobites is liveblogging AAS! In order to avoid inundating our readers’ RSS feeds, we’ll be updating this post with short paragraphs about the talks we’ve heard and posters we’ve seen. Keep checking back throughout Tuesday afternoon! 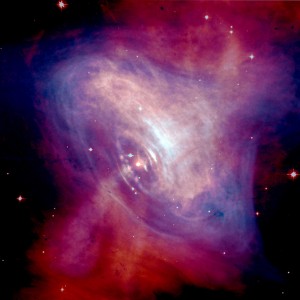 At 4:30 EST, Alice Harding (GSFC) will give a talk about “The Amazing Pulsar Machine.” Here’s a lovely optical/X-ray image of the Crab Pulsar.

The Thirty Meter Telescope project (TMT)  was born out of the success of the Keck Observatory. In 2000, a “Giant Segmented Mirror Telescope” was indicated as a top priority of the 2000 Decadal Survey. The TMT is a partnership between the US, Canada, China, India and Japan and it will be located in Mauna Kea, Hawaii, with science operations expected to start in 2022. Imagine the power of a 30 m mirror with adaptive optics! This system will yield images that are 12 times sharper than the Hubble Space Telescope. Among the science that will come out of TMT there are spectroscopic studies of the Universe up to higher redshifts than it is possible at the moment and the capability to constrain General Relativity in center of our Galaxy, near the surface of the central black hole. How would you use TMT? 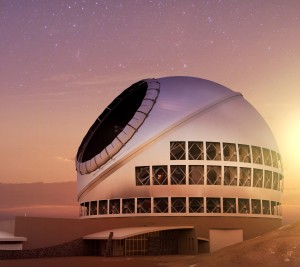 As you’re probably aware, NASA’s budget is tight and has been for several years. The town hall began with Paul Hertz, director of the NASA Astrophysics Division, outlined NASA’s goals to implement the goals of the 2010 Decadal Review under the current budget (which is insufficient to complete all the goals of the review).

You have probably heard that a budget was passed by Congress recently. This sets the total level of discretionary spending, but not the specific level for astronomy. The expected value is between the value assigned to astronomy during the sequestration and the value requested by President Obama. This budget includes no money for education and public outreach (ed. note: Call/write/email your Congressperson if you are unhappy about this! See here.

Other unfortunate news: as a result of the recent shutdown, the Antarctic research season was shut down as well.

Some good news! The WFIRST mission is still being planned. The plan is to use the 2.4 meter “Hubble-class” satellites recently donated by the NRO. There’s also discussion of adding a coronagraph to be used in the search for directly imaged exoplanets. NICER and TESS are also moving along according to plan. Additionally, SOFIA has three new instruments that will be commissioned this year.

Overall, there are issues. The budget is flat, the number of proposals are up, and therefore the fraction of supported proposals is down. There was no discussion about the upcoming senior review, which will decide on extensions for current missions such as Kepler, Spitzer, NuSTAR, and Hubble beyond the present year. There are bright spots: the currently planned missions are still moving along. But it looks like NASA is likely in for another difficult year.

Committee for the Status of Women in Astronomy Town Hall

Meredith Hughes presented an updated astronomy demographic survey during the Committee for the Status of Women in Astronomy Town Hall. The goals of the survey are simple: to determine how many men and women are in each career stage and how those numbers change over time. The survey was conducted in 1992, 1999, and 2003, and now 2013. The 2013 data included 3117 astronomers from graduate students through full professors. Among the overall very encouraging results:

In less encouraging news, there appears to be a negative correlation between research ranking level and proportion of women. There is also evidence for an increasing polarization in departments, with some departments struggling to attract and retain females at all levels.

There were two standing-room-only afternoon sessions: code sharing and a workshop on education and public outreach. It was hard to choose one or the other, but code sharing was something I knew little about. There were four short talks followed by nearly an hour for Q&A and discussion. The overarching themes of this hugely popular session included…

There was also a lively “meta-session” on twitter in real time, that I participated in (I’m @merrdiff). Be sure to search #astroCodeShare on twitter for more thoughts on the future of code sharing in astrophysics.