Whilst the US astronomy scene was all about the AAS, across the Atlantic we British astronomers had a busy week of our own. Over three evenings in January the BBC broadcast the astronomy TV show, Stargazing Live, which is accompanied by the biggest astronomy outreach event in the calendar. A spectacular hit with the British public, has Stargazing Live generated an all time high interest in astronomy? 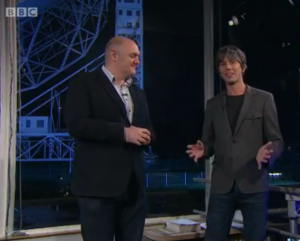 Stargazing Live, now in its fourth year, continues to be a smash hit, with ratings exceeding three million – that’s a LOT by UK standards. As its name suggests, it is live, and presented by two heavyweights of British sci-com: Professor Brian Cox and comedian Dara O’Brien. Scheduling a live astronomy show in a country that is overcast three out of every four days is brave. Nonetheless, despite the often cloudy night skies this show is always popular with keen amateur astronomers and mildly interested members of the public alike. Of course it doesn’t really depend on clear skies – most of the content is interviews with astronauts and academics, guides to the winter night sky, etc. The knock-out feature of this year’s show was the spectacular Aurora Borealis, filmed in Norway.  Never before broadcast on live television, the northern lights provided a stunning show, streaking across the Norwegian sky. 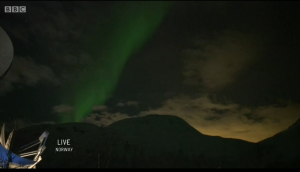 Footage of the Aurora Borealis was broadcast, live, for the first time in history.

Stargazing Live is not just pure entertainment: citizen scientists are recruited by the bucket-load during the broadcasts and real science is achieved as a direct result. This year Dr Chris Lintott invited viewers to participate in Space Warps: the Zooniverse project that asks citizen scientists to hunt for lensed galaxies. The Space Warps team hoped for half a million classifications over the 48 hours of Stargazing. That figure was reached before the end of the first episode. Dr Lintott said, “We’d thought we were being ambitious to ask for 500,000 classifications over 48 hours, but I was absolutely staggered to hit that target before the end of the first episode. Even as I was reporting live on air I didn’t quite believe what I was saying. I think the success of Spacewarps and Stargazing shows what enthusiasm there is for astronomy in the UK – whether that’s looking up at the sky or learning about the latest results”. After 48 hours more than 8 million images had been classified – a job that would have taken the Space Warps team the rest of their academic careers to complete. Turns out you can achieve a lot with fifty-thousand helpers. 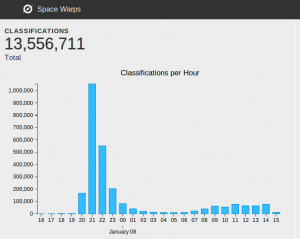 In the four years since its inauguration, Stargazing has evolved from a television show to a huge nationwide outreach event. This year three enormous regional astro-fests were laid on to accompany the live shows. About 6,000 people turned up at each event to look through telescopes, attend talks, watch planetarium shows and chat with academics. Such a huge, multi-venue, nation-wide outreach event had never been co-ordinated before Stargazing. Given the number of visitors to each event, the public demand is clearly extremely high. I went along to one of the big regional events this year – Stargazing Portsmouth – to represent Oxford astrophysics and spent most of the evening snapping members of the public with our thermal infrared camera. Several universities also organise their own smaller-scale outreach events to coincide with the telly show. We got about 1,300 people through the door this year at Oxford and a line that stretched all the way down the block (our building regs only allow 300 in at a time). It’s ok though; we Brits love to queue. Visitors were treated to planetarium shows, talks, views of Jupiter (yes, it was clear!), astronomy themed improv games, quizzes, panel shows and loads more. It was rewarding and exhausting and one of the best experiences of my PhD so far. 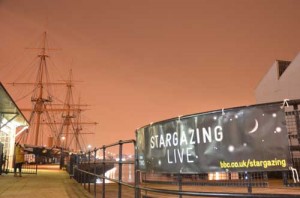 Stargazing Portsmouth: one of the three regional Stargazing events. Set in the Portsmouth historic dockyard, members of the public were guided around the night sky from the deck of the HMS Warrior. Image credit: Andreas Papadoupolous.

Stargazing Live is not the only astronomy show on British telly of course: The Sky at Night has brought astronomy to our screens once a month since 1957. Some thought that The Sky at Night – one of the longest running television shows of all time – would not continue after the death of Sir Patrick Moore (monocled icon of British astronomy). The public showed huge support for the show; petitions and appeals to keep it on our screens were pasted over Twitter and it has recently been re-commissioned for a second, hopefully equally interminable, series. The current high level of enthusiasm for Astronomy from the British public is sometimes attributed to the ‘Brian Cox effect’. He’s a lovable physics Professor with a gentle presenting style, who fronted the hugely commercially successful series of documentaries Wonders of the Solar System (2010),Wonders of the Universe (2011) and Wonders of life (2013). 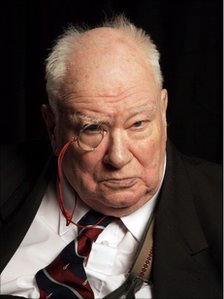 Stargazing Live, the re-commissioning of The Sky At Night and all the large and small regional Stargazing events have culminated in a nation-wide passion for astronomy. Long may it continue… and may it lead to more funding.

Experiencing a dark tour of the universe