Gamma ray satellite missions, like Swift and Fermi, detect short hard gamma ray bursts (SGRBs) a handful of times per month. SGRBs are flashes of high-energy gamma rays that last about a second. They are probably created when two neutron stars or a neutron star and a black hole merge. Violent stellar mergers like this don’t just shine brightly in the gamma ray spectrum. They also send out faint wiggles in space-time, known as gravitational waves.

So SGRBs should be detectable by LIGO, the Caltech-MIT gravitational wave observatory. That is, detectable if the stars are close enough to us for the very faint gravitational waves to register in these detectors. But during the most-recent LIGO observing run, covering about a year from 2009-2010, LIGO detected precisely zero gravitational waves coincident with a satellite-detected SGRB.* Never fear, null data are still data! Chen & Holz use this lack of detections to place a lower limit on the jet beaming angle of SGRBs. 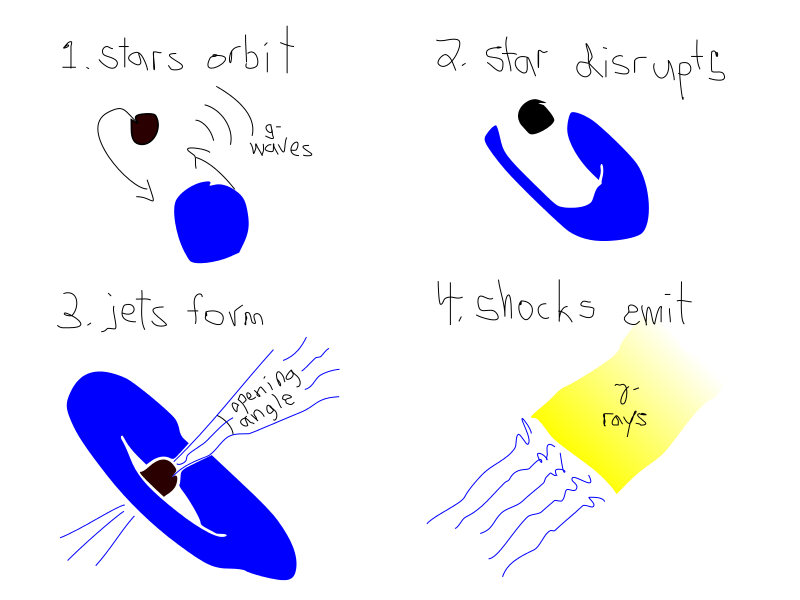 The formation of an SGRB from a black hole (black) and a neutron star (blue). 1. The black hole and neutron star orbit close and fast—about a hundred times per second—emitting gravitational waves. 2. Tidal forces disrupt the neutron star from spherical equilibrium, and it sloshes out into a swirling accretion disk. 3. The accretion disk rapidly drains into the black hole, releasing an enormous amount of gravitational energy, which is somehow (a hot research question!) converted into narrow jets along the rotation axis. 4. Finally, at a great distance from the original stars, about 10 light hours away, or the distance of the Kuiper Belt from the Sun, these jets dissipate in internal shocks and emit high energy gamma ray photons. Note that a binary neutron star merger would behave qualitatively the same. (Author’s cartoon.)

The gamma rays in an SGRB don’t shine in all directions, but are instead confined to narrow beams,** as shown in the cartoon.

For most SGRBs, the jet opening angle is impossible to determine, as this astrobite explains. But a few optical observations hint at opening angles of &lt10°, and simulations of accretion disks show jets forming with angles of &lt30&deg.

How do Chen & Holz use a lack of gravitational wave detections to place a new and independent limit on the beaming angle?

And since LIGO didn’t see any gravitational waves in that run, Chen & Holz are able to place a lower limit on the average beaming angle. They estimate it must be >2°, if they assume realistic black hole / neutron star masses. This isn’t very constrictive, but it is consistent with the other methods of determining the beaming angle described above.

With this independent constraint on the the beaming angle, Chen & Holz are able to place lower limits on event rates for gravitational wave detections of SGRBs by future, more-sensitive gravitational wave detectors. Their results are very optimistic. Even with the low sensitivity expected when Advanced LIGO begins observing in 2015, the first detection is expected in less than 16 months.

* Actually, no gravitational waves of any type have been detected during the entire first decade of LIGO’s operation. This silence, however, is not surprising given the threshold sensitivity of this type of detector. Note, the new more-sensitive generation of detectors (Advanced LIGO) will begin operating in 2015, with a detectable volume about 1000 times greater than that of the first-generation detectors.