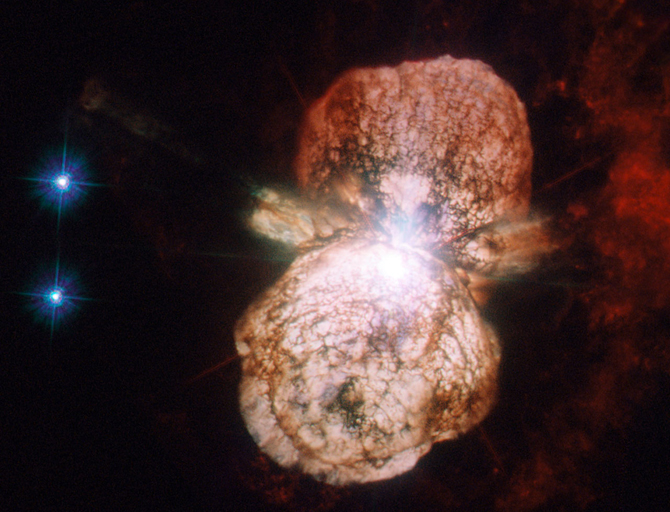 Figure 1. Eta Carinae, embedded in the Homunculus Nebula it created by throwing off giant clouds of matter during the Great Eruption. Credit: ESA/NASA

Eta Carinae is one of the biggest and brightest stars in our galaxy, with a mass over 100 times and a luminosity more than a million times that of our sun. Scientists have been observing it one way or another for almost 400 years, especially because it has large variations in brightness, and there was even a period in the 19th century called the Great Eruption when it was the second brightest star in the sky. The causes of that are still under discussion. Eta Carinae is furthermore a binary system (the secondary star is about 30 solar masses), and in 1998 it reached periastron, the point of closest approach for the two stars.

Eta Carinae has been observed with the South African Astronomical Observatory (SAAO) in the JHKL infrared bands for over forty years. From the start of observations in 1976 until periastron in 1998, astronomers saw a linear increase in the star’s brightness (although semi-periodic variations are also seen). But after 1998, the linear trend changed significantly, and the star began to brighten much faster in the J and H bands. See Figure 2 for a graphical representation, which has been binned in time to get rid of the periodic variations and show only the linear trend. 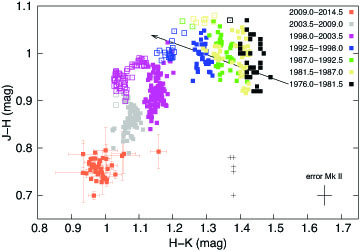 Figure 2. This plot shows the colors (J minus H magnitudes vs. H minus K magnitudes) of the star changing with time, with time represented by the different colored symbols. You can read the times from right to left on this plot (check the legend if you don’t believe me), which means the H-K color has been steadily decreasing since the start of these observations in 1976. Remember here that magnitudes are measured backwards, so a smaller number means a brighter object. The interesting part is the sudden break between the blue and purple points where the trend in J-H color takes on a completely different trend. The sudden decrease in J-H means the object got brighter in those bands, which corresponds to it becoming more blue. The black arrow represents the pre-1998 trend, which is clearly very different from the post-1998 trend. Credit: Mehner et al.

This long term trend, both pre- and post-1998, is most likely explained by a change in the blackbody temperature of some component of the Eta Carinae system (which includes the main star, its companion, and the clouds and shells of material the star has thrown off, seen in Figure 1) which has increased from 2400 K to 3000 K between 1998 and 2013. That’s pretty significant, especially when you consider the extremely short astrophysical time frame during which this heating has occurred. And even though the change in behavior seems to coincide with periastron passage in 1998, there’s no sign of Eta Carinae returning to its old ways, indicating this is the new status quo. Other measurements also support this star appearing brighter and more blue in recent years, but since Eta Carinae is already close to the Eddington limit (the maximum brightness a star can have before radiation pressure overcomes gravitational pressure), it’s unlikely that the star itself is getting brighter. Instead, what we are seeing is the effect of dust around the star being destroyed more quickly (or created more slowly), making it appear brighter and less red. Dust absorbs bluer light preferentially, so the clearing out of dust lets astronomers see the truer, bluer color of the star itself inside the system. While the Homunculus Nebula that Eta Carinae sits inside of is slowly expanding and dissipating, the authors of this paper do not think that it could be dissipating quickly enough to account for all of the accelerated brightening they see. There must be a second factor at play.

The authors argue that since Eta Carinae’s rotation rate is already nearly critical (the point at which it starts to lose mass), on close approach to its companion it could have gained enough angular momentum for noticeable gravity darkening, meaning the star is spinning so quickly it becomes non-spherical, and has higher surface gravity at its poles than its equator.  Mass loss scales directly with effective gravity, so lower effective gravity near the equator ends up meaning less mass loss (this may sound counterintuitive, but it’s just a math proof you can check if you’re curious). Since the star is always destroying the material around it at some rate, a decrease in the production rate of that material means the dust will clear out faster, fast enough to account for the increased temperature in the J and H bands as observed.

A change in rotation or mass loss rate is important in a star like Eta Carinae, and could imply it’s becoming more unstable—maybe in preparation for another great eruption event? Eta Carinae will be at periastron again in the middle of 2014, so stay tuned for updates. In a field where most events happen on million year time-scales, it’s fun to watch Eta Carinae evolving literally as we watch.