Compact Galaxies in the Nearby Universe

When we look out into space, we see the universe as it existed in the past. Light traveling from very far away has taken billions of years to reach our telescopes, and was emitted in a time when even familiar things like galaxies could look quite a bit different. By looking back in time we can observe that galaxies used to be much, much smaller than they appear today, especially the most massive ones. Something must have caused them to grow, and the key to understanding how that happened lies in studying these young, compact galaxies. 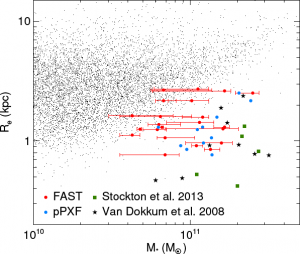 Figure 1. The sizes and masses of the compact galaxies are plotted against those of the normal galaxies in the survey. The red and blue points indicate different methods for estimating galaxy mass, the blue (pPXF) method is generally more accurate. Although some fall within the bulk of the galactic population, on the whole these are very unusual and rare objects.  (From Figure 12 in the text).

There is a problem, however: because these compact galaxies are extremely distant and faint, they’re hard to study in detail. One possible approach to understanding galaxy growth, then, is to find similar objects in the low-redshift universe (that is, closer to us in space and in time). Recently, surveys have turned up some nearby galaxies that appear to be massive, compact, and old: possibly remnants of the earlier era which did not get puffed up like most galaxies. The aim of this paper is to find these types of local, massive, compact galaxies and study their properties in detail.

The authors located some 22 galaxies fitting the description in the data from two large telescope surveys: SDSS and UKIDSS. Where the surveys overlapped, it was possible to combine the photometry from SDSS and UKIDSS to search for galaxies which were red enough to be very old, bright enough to be massive, and small enough to be compact. SDSS’s spectroscopy allowed the authors to find each galaxy’s redshift, which indicates distance and allows for a precise determination of the galaxy’s size.

When compared to the other galaxies in the SDSS data set, the compact galaxies are much smaller, and by most estimates are on the extreme massive end (see Figure 1.) Some aren’t distinguishable in age or mass from the general population, suggesting that they aren’t old survivors of the high-redshift compact population. However, the search did turn up galaxies which formed the majority of their stars above redshift 2 — that is, more than 10 billion years ago. These old compact galaxies are very strange indeed, and some show hints of disk structure, which might indicate that high-redshift compact galaxies have grown by accreting matter onto their outer layers.

All in all, these 22 galaxies are rare and interesting objects, but more study and wider searches will be needed before we can say for sure how they’ve come about and what they tell us about galaxy evolution. Studies like this one contribute to the small but growing sample of such objects. 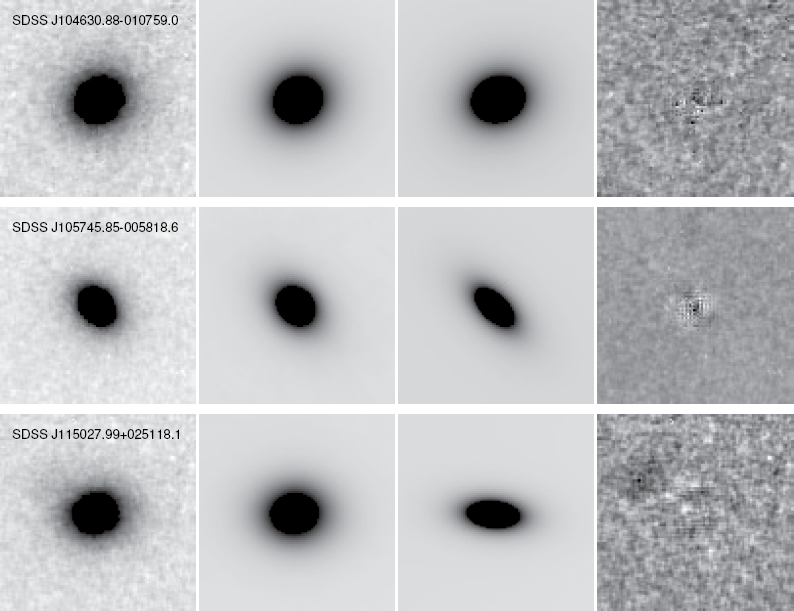 Figure 2. Examples of some of these compact galaxies (left column). The middle columns show models that fit the stellar distribution in these galaxies. The far right column shows what remains when we subtract the model from the actual data: the fact that very little remains indicates that the models are a good fit to the data (from Figure 6 in the text).