We absolutely loved all the fantastic undergrad work we saw at the winter AAS meeting in DC — if you, too, have been working on a project that you want to share, we want to hear from you! Think you’re up to the challenge of describing your research carefully and clearly to a broad audience, in only one paragraph? Then send us a summary of it!

Kevin is an undergraduate in Astrophysics and Mathematics in his third year at University of Cincinnati. His interests include planet-building circumstellar disks and extrasolar planets. 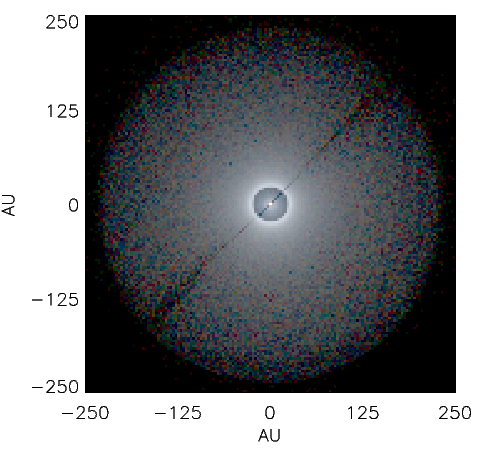 Evidence of Planetary Interactions in Young Planet Building Disk?
HD169142 is a young (~6 million years old) Herbig Ae star hosting a circumstellar disk. We observe an excess of near infrared and far-infrared emission originating from material close to and far away from the star. But what is perhaps more intriguing is the lack of emission in intermediate wavelengths — suggesting a gap between 0.15 AU and 25 AU (put in perspective, from 1/3 the orbital distance of Mercury to just between the orbits of Uranus and Neptune). This is exactly the sort of gap that we would expect from the formation of several planets. Observations with the HST and VLT have directly imaged the gap. We’ve seen this in dozens of young stars, but what’s so interesting about HD169142 is that over the past 10 years we’ve seen variability in near infrared emission. In other words, something is changing in the inner disk over the course of 10 years. We explain this with a decrease in the scale height of the inner edge of the disk, perhaps due to planetary interactions at about the orbital distance of Mercury. Now, this is interesting and exciting as it stands, but there’s more. Changing the scale height of the inner disk should affect the shadowing of the outer disk, and thus we should observe an increase in long wavelength flux. However, we don’t see this. In fact, observations show absolutely no change in flux at these wavelengths. In order to explain this in our models, it’s necessary to tilt the inner disk by 15-18 degrees from the plane of the outer disk. In this way, the light from the photosphere of the star doesn’t have to penetrate the inner disk before reaching the outer disk. This exactly reproduces the observed lack of change in far-infrared flux. The existence of a tilted inner disk may be evidence of a planet on a misaligned orbit.

Aida is currently an undergraduate junior physics major, working towards a PhD. This research was done as part of the Kitt Peak REU program held in Tucson, AZ. 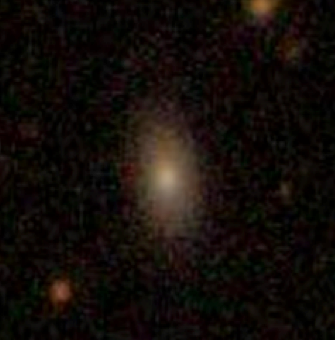 An interesting galaxy from the RESOLVE survey. The bright center suggests that it might be a misclassified AGN.

RESOLVE’d AGN: Refining Active Galactic Nuclei Classification Techniques
We use multi-wavelength methods to select a sample of nearby Active Galactic Nuclei (AGN) for further environmental study. Data from the RESOLVE survey, a volume-limited census within <50,000 cubic Mpc (Kannappan et al. 2013), is merged with Wide-Field Infrared Survey Explorer (WISE) data and the Sloan Digital Sky Survey (SDSS) DR7 release to identify AGN in the nearby (z ~ 0.02) cosmic web. The volume-limited nature of RESOLVE is of particular interest as it allows for close examination of AGN environments and fueling mechanisms. We identified a group of objects that are classified as star forming galaxies with the Baldwin-Phillips-Terlevich diagnostic diagram, but have mid-IR colors that suggest they may be AGN. The ambiguous nature of these objects makes them interesting targets for further investigation.