Did you do an REU this summer? Or maybe you’re just getting started on an astro research project this semester? If you, too, have been working on a project that you want to share, we want to hear from you! Think you’re up to the challenge of describing your research carefully and clearly to a broad audience, in only one paragraph? Then send us a summary of it!

Savannah worked on this project as a NSF REU student at Vanderbilt University after her junior year at Villanova. Her research has since been published in her first first-author paper in the Astronomical Journal.

The Large Synoptic Survey Telescope (LSST) will photometrically monitor approximately 1 billion stars for ten years. The resulting light curves can be used to detect transiting exoplanets. In particular, as demonstrated by Lund et al. (2015), LSST will probe stellar populations currently undersampled in most exoplanet transit surveys, including out to extragalactic distances. In this paper we test the efficiency of the box-fitting least-squares (BLS) algorithm for accurately recovering the periods of transiting exoplanets using simulated LSST data. We model planets with a range of radii orbiting a solar-mass star at a distance of 7 kpc, with orbital periods ranging from 0.5 to 20 days. We find that standard-cadence LSST observations will be able to reliably recover the periods of Hot Jupiters with periods shorter than approximately 3 days, however it will remain a challenge to confidently distinguish these transiting planets from false positives. At the same time, we find that the LSST deep drilling cadence is extremely powerful: the BLS algorithm successfully recovers at least 30% of sub-Saturn-size exoplanets with orbital periods as long as 20 days, and a simple BLS power criterion robustly distinguishes approximately 98% of these from photometric (i.e. statistical) false positives. 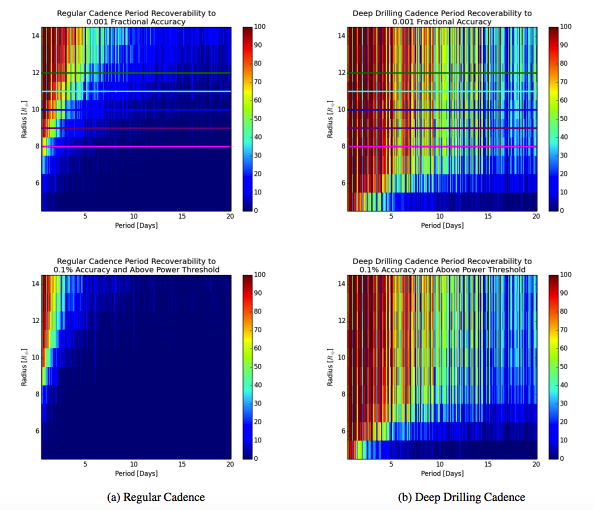 Two-dimensional histograms representing period recoverability across period and radius space where the top two plots represent period recoverability considering only top BLS peak accuracy. The bottom two plots include an additional power threshold with all detections also having a BLS power greater than 7.69526 for regular cadence and 7.32893 for deep drilling cadence.