Finding the Origin of Radio Emission in Galaxy Clusters

Galaxy clusters, collections of hundreds to thousands of gravitationally interacting galaxies, are testing grounds for a whole swath of astrophysics. Much of the phenomena seen in galaxy clusters reside in the diffuse gas spread between the galaxies, called the intracluster medium (ICM). Observations of galaxy clusters in X-ray reveal a hot (~107-108 K), luminous plasma that spews out X-rays generated from interactions between electrons and ions in the ICM (called thermal bremsstrahlung). This gas is heated to these temperatures from the gravitational potential energy used as the cluster formed. Some fraction of clusters exhibit a not-so-well-explained source of radio emission, seen as either radio relics or radio halos. Halos are sources of radio emission usually centered on the cluster that extend throughout a significant fraction of the ICM. Relics are elongated radio features found at the outskirts of some clusters. Though both are the result of charged particles spiraling around magnetic fields (synchrotron radiation), there has yet to be consensus as to where the charged particles came from, and how they got their energy.

The authors investigate this problem by examining the unique radio halo and radio relics of the galaxy cluster PLCKG287.0 +32.9. This cluster is located at a redshift of z = 0.39 and is shown in Fig. 1 in a composite of X-ray (red) and radio (blue and green) emission. Based upon the X-ray emission properties, this cluster is currently merging (and still forming). The radio halo is hard to see here, as it mostly coincides with the red x-ray at the center of the cluster. The radio relics are the large blue regions in the upper right and lower left of the image. Fig. 2 shows just the radio emission, with the relevant structures labelled. The white letters mark radio galaxies. 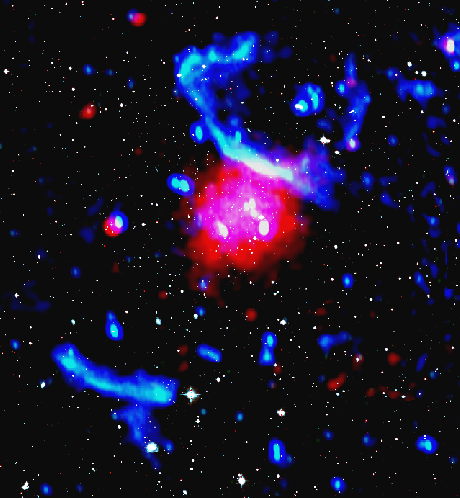 Fig. 1: A composite image of PLCKG287.0 +32.9 showing X-ray (red) and radio (blue and green) emission. The relics are located in the upper right and lower left, and the halo coincides with the X-ray emission. Source: Fig. 1 of Bonafede et. al. 2014 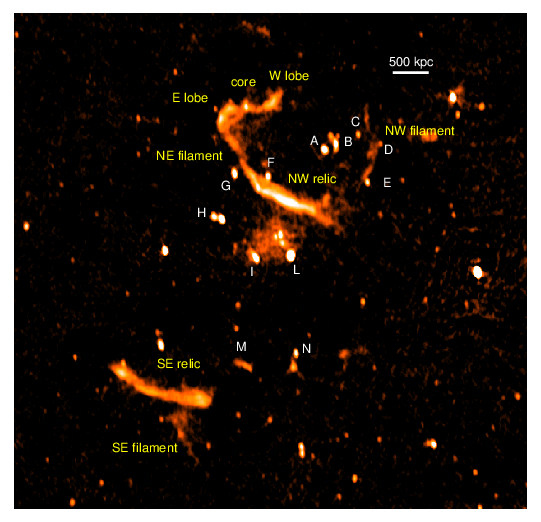 The origin of the charged particles (namely electrons, but also possibly protons) in the radio regions of the cluster are likely related to merger events in the galaxy cluster. Shocks, generated when gas collides at supersonic speeds, are very effective at accelerating charged particles to the relativistic speeds necessary for synchrotron emission. However, the current models for this process have inconsistencies (i.e. some clusters fit the model, while others do not). Depending on the nuances of each model, however, astronomers expect a different spectral index of the radio emission. This value describes how much radio flux is generated at a given frequency; astronomers often talk about the “steepness” of the radio spectrum, which refers to how fast/slow the flux increases or decreases as a function of frequency. The two competing models both involve the acceleration of charged particles by shocks, and I will refer to them as Method I and Method II. Method I assumes the accelerated particles are those floating around in the ICM already (both electrons and protons), while Method II assumes that the particles were once relativistic electrons thrown out by active galactic nuclei (AGN), that become re-accelerated by shocks. AGN are the very luminous central regions of what are called “active galaxies”; AGN are often associated with giant jets that throw matter out of the galaxy from gas spiraling around its central black hole. These jets can be readily seen in synchroton emission.

Assuming Method I, the authors discuss two possible origins for the radio relics and the associated shocks that are consistent with their observations: 1) a smaller group of galaxies passed through the cluster a long time ago, generating the lower left relic; ~0.6 Gyr later, it came back around and passed through again, generating the upper right relic, or 2) the two are separate, with the upper right relic originating from a merger, while the lower left is actually part of a small group of galaxies falling into the cluster (these galaxies are seen in optical images, and could be associated with the radio emission). The main drawback of Method I is that the accelerated protons should produce gamma ray emission. Though no gamma ray observations have been performed for this galaxy, no gamma ray emission has been detected in any galaxy cluster to date. (Method II does not have this issue, as the charged particles from the AGN would be predominately electrons)

Method II could also explain the radio relic in the upper right. Though no galaxy has been confirmed to exist at the “core” labelled in Fig. 2, the E and W lobes suggest that they could have come from gas thrown out by an AGN. However, this scenario would require 2-3 AGN in order to explain the size of the entire radio relic. Method I predicts a spectral index that varies gradually and roughly linearly over the structure of the relic. This can be seen in Fig. 3 for the lower relic (right), but the trend is very different for the upper relic. In addition, the spectral index is much more inhomogenous in the upper relic (not shown here, but the paper has some pretty plots to look at, Fig.8-10). Method II could explain these complexities, but they could just be a result of projection effects of the way the relic is orientated in the cluster relative to the observer (the astronomers). 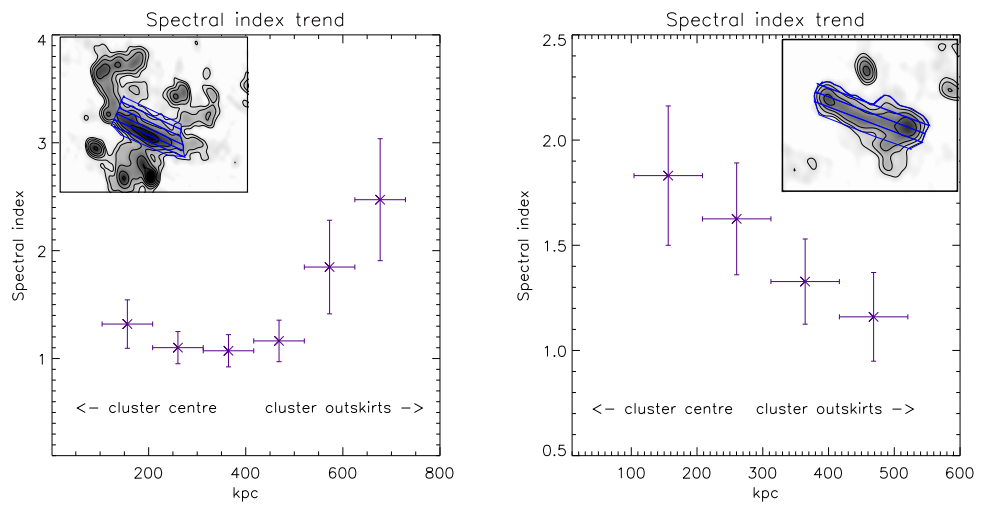 Fig. 3: A plot of the trend of the spectral index as a function of distance from the cluster center along the relic, for the upper relic (left) and lower relic (right). The blue regions in the inset mark where the trend is being examined. Source: Fig. 11 of Bonafede et. al. 2014

So… How are Radio Relics Formed?

In short, we still don’t know. This study offered a tantalizing new insight into just how complicated these radio structures can be. The observations don’t seem to favor one explanation over another, but the authors do argue that Method II would solve many inconsistencies in observations of other galaxy clusters (I did not discuss all of these inconsistencies here, but I encourage you to look at the short bullet points in sections 7 and 8 of the paper). There is also the ever real possibility that a combination of both methods could explain the variety of radio halos and radio relics observed in galaxy clusters (and why many clusters don’t have either). We just don’t know yet. But I digress, look at me still talking when there’s Science to do…