If you’re making a heavy element out of protons and neutrons, you’ve got to cram lots of neutrons into it, fast! Or else it will split into lighter elements. Neutrons serve as a kind of stabilizing presence in heavy nuclei. Lanthanides in particular, with more than 140 neutrons and protons in each nucleus, require a special environment, with lots of neutrons to spare. This type of nucleosynthesis in a neutron-rich environment is called the r-process, for “rapid neutron capture”.

There aren’t many places in the universe that you can find a bunch of free neutrons not already trapped inside a nucleus—except in neutron stars. Luckily, neutron stars in violent mergers with other neutron stars, or with black holes, tend to disperse a little bit of their matter into the interstellar medium. Tidal forces eject some matter as the two objects swing around each other in their final orbits. Then, if an accretion disk forms*, winds blown off the surface of the disk disperse even more matter. Surman and her colleagues look at the nucleosynthesis that occurs in this latter process, and find something surprising.

It turns out that these winds are driven proton-rich by the lopsided neutrino radiation shining from the disk. In the cases they examine, this results in too few neutrons for the r-process to occur, and no Lanthanide metals are formed, but rather lots of the much lighter 56Ni. (Recall that the superscript written to the left of an atomic symbol refers to the total number of neutrons and protons in that isotope.) Let’s look at their thesis in pieces.

Winds from the Accretion Disk
The accretion disk is hot—tens of billions of degrees—and shines very brightly in neutrinos because interactions between neutrons and other particles produce neutrinos. This bright flux of neutrinos pushes on the outer layers of the disk like photons on a solar sail. Layers of the disk blow off in a strong wind.

Are Driven Proton-Rich
But the neutrinos aren’t done with the wind at the point of launch. They continue to irradiate the wind, changing its composition. Electron flavored neutrinos have the special power of transforming neutrons to protons (plus an electron each): n+ν→p+e–. And electron flavored antineutrinos have the opposite power, transforming protons into neutrons (plus a positron each): p+ν→n+e+. So if the wind is dominantly irradiated with neutrinos, it grows proton-rich. And if it is dominantly irradiated with antineutrinos, it grows neutron-rich. 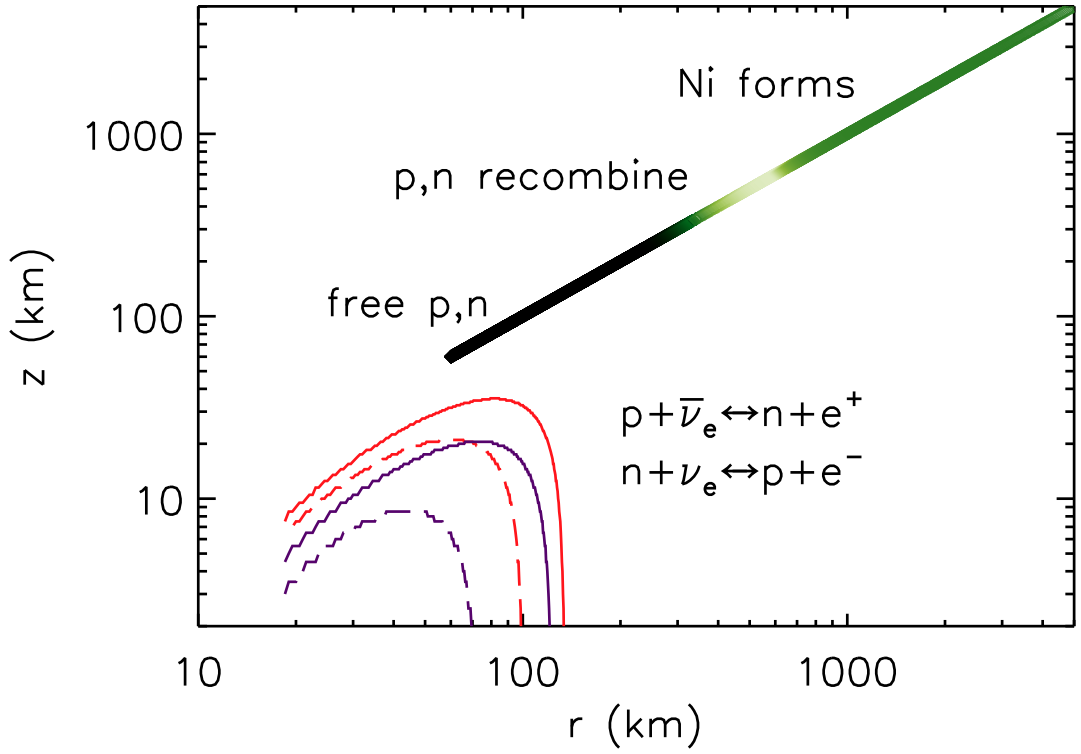 A cross-section of the disk and the trajectory of one parcel of wind. The diagonal line shows the trajectory of one mass element blown off the disk. Its composition is represented by its color. Black represents free protons and neutrons, white represents very lightweight nuclei (helium), and green represents heavier nuclei (primarily 56Ni). The neutrino (solid) and antineutrino (dashed) emitting surfaces are shown at early times (red) and later (purple). You can see that the antineutrino surface is much closer to the lower left corner, where lives the black hole, causing the antineutrinos to be redshifted to much lower energy.

As it travels far away from the disk, the wind cools, and the neutrons and protons combine to make heavier elements. In this proton-rich environment, almost half of the matter is synthesized into a heavy isotope of nickel, 56Ni, and no Lanthanides are made.

Interestingly, this conclusion modifies their earlier work, in which they did not include relativistic effects like gravitational redshift. Their earlier work indicated that the wind from these accretion disks was more likely to be neutron-rich, and capable of generating the Lanthanides. Through this more recent study, they discovered that gravity has a strong effect on nucleosynthesis in this environment.

Besides significantly modifying one of the primary nucleosyntheis models for Lanthanides, this study also moves us closer to knowing what to expect in a kilonova from such a merger. 56Ni is highly unstable, and decays on a timescale of days to a more stable nucleus, heating up the wind, and making it shine brightly at optical or infrared wavelengths. The light from a Lanthanide-rich wind, on the other hand would appear redder and longer-lasting. We have much to learn then from observations of kilonovae, by groups like Berger’s and Tanvir’s.

* The penultimate stage in the life of many merging binary neutron stars, or a neutron star and a black hole, is an accretion disk swirling around a central black hole. In the case of two neutron stars, the black hole forms because the merged object is twice as massive as a normal neutron star: neutron pressure isn’t strong enough to handle that kind of gravity, and the object collapses. Actually, it seems that in some cases a ‘hypermassive neutron star’ evades collapse for a few tens of milliseconds or longer. A number of research groups are actively exploring this topic. (By the way, the ultimate stage in the life of all of these mergers is a plain old black hole with no matter near it: everything goes down the drain in less than a second after initial contact.)