Scientists have long wondered about the early history and habitability of Mars. Currently, the surface is cold and dry, and the only signs of water are seen in the polar ice caps. However, observations have suggested that the Martian surface might have been covered with copious amounts of surface water in the past. This inference is made from geomorphological features such as valleys, deltas, sediments deposited by water, etc. The possibility of previously existing water on Mars has profound implications for its past climate and habitability, which was certainly different to today’s conditions.

In this paper, the authors attempt to constrain the amount of water lost through atmospheric escape over the Martian geological history by examining hydrogen isotopes in Martian meteorites. Specifically, the authors examine the ratio of deuterium to hydrogen (D/H) and see how it changes over time.  This analysis is done using in situ ion-microprobe analysis, which uses a beam of charged particles to analyze the elemental composition of a meteorite sample. The D/H ratio is a good tracer of water content due to a process called fractionation. As water is cycled between the atmosphere and surface water, we expect some water molecules with normal hydrogen to be lost from the atmosphere, while heavier water molecules with deuterium are retained. A high D/H ratio results from this loss of H relative to D in the atmosphere (the Martian atmospheric D/H ratio is six times higher than the Earth’s).

The total water volume on Mars is usually expressed in Global Equivalent Layers (GEL), which is the water volume corresponding to the entire surface being covered to some depth in meters. The polar ice caps present on Mars today have a volume of about 20-30 meters GEL. The authors examine two major periods in Martian history, and infer that water loss during its early history from 4.5 Gyr ago to 4.1 Gyr ago (> 41-99 meters  GEL) was more significant than the water loss after that (> 10-53 meters  GEL; see Fig. 1). They also estimate that the initial total surface water could be around 100-1000 meters  GEL. This model yields the minimum estimate of total water loss. These estimates are generally consistent with other estimates derived from geological records, which also suggest that early oceans should have had more water than later ones. However, the discrepancy between the minimum estimate found here and estimates of water reservoir volume found from geological records, seen in figure 2, suggests that some water could lie beneath the surface. The authors claim that the amount of undetected subsurface water or ice should be around 100-1000 meters  GEL, exceeding the present amount of water in ice caps. 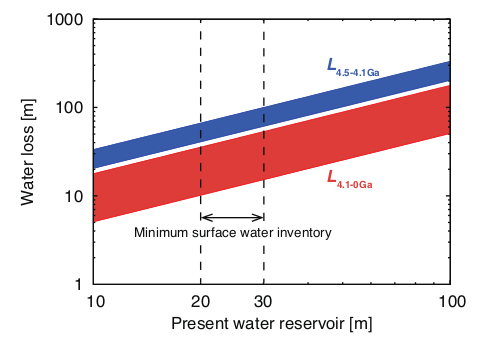 Fig. 1: The blue band represents the water loss in stage 1 (4.5 Gyr to 4.1 Gyr), and red is stage 2 (4.1 Gyr-present). The width of these bands represent the range of inferred water loss. The dotted lines represent the minimum estimate for the present water content. (Fig. 2 in paper). 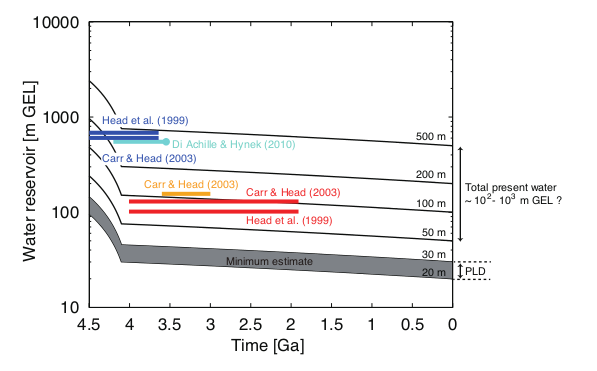 Fig. 2: Evolution of water reservoirs for different initial volumes based on other geological data. The model in this paper sets a minimum estimate for the water loss (grey band). (Fig. 4 in paper)

A few systematic effects could potentially be contributing to these water loss estimates. Earlier in the solar system’s history, the intense UV radiation from the Sun could have reduced D/H fractionation due to escape of both isotopes of hydrogen from the atmosphere. Additionally, these estimates do not take into account of effects of water supply from outgassing and comet impacts. Outgassing is expected to surpress the fractionation of isotopes, so more water should have been lost than estimated. The hydrogen isotopic composition of comets are variable, and these impacts can increase the D/H ratio of surface water without atmospheric escape. However, comets are typically enriched in noble gases and should significantly increase levels of xenon in the atmosphere, but these levels are not detected.