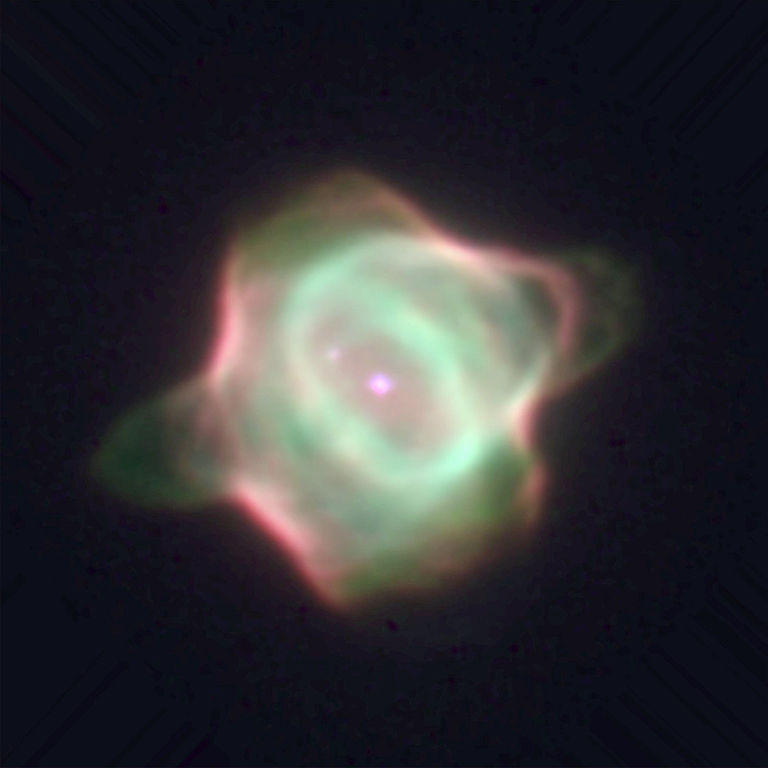 In general, stars and other astrophysical phenomena evolve on time scales that dwarf human experience. So a star that changes over the span of mere decades is really something to watch. SAO 244567 has undergone large temperature fluctuations and mass loss rate changes in only ~20 years of detailed observations, and is challenging astronomers to pin down exactly what kind of star it is.

SAO 244567 is nestled in the heart of the Stingray Nebula, a tiny planetary nebula. Planetary nebulae are formed when an intermediate mass (roughly 0.6–10 solar masses) star enters the last stages of stellar evolution. 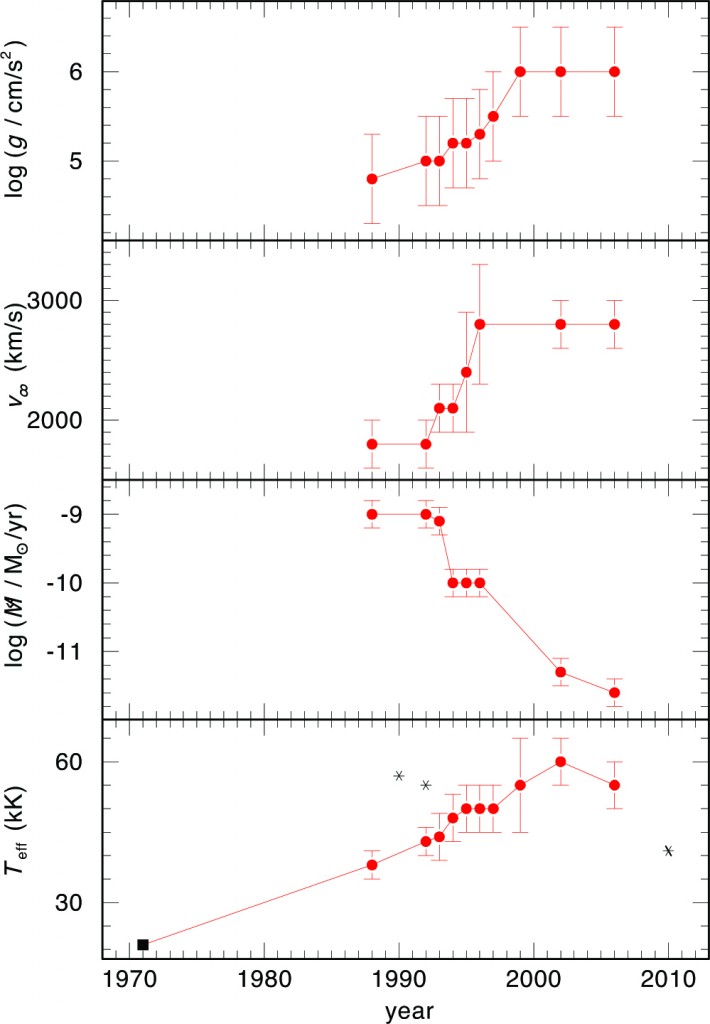 To summarize briefly, a star like this burns hydrogen in its core (on the main sequence), then in shells (the red giant branch, or RGB), then burns the helium in its core (the horizontal branch). A few stars with lower masses peter out here (the extended horizontal branch, or EHB), but most continue on to burn helium in shells (the asymptotic giant branch, or AGB). At this point, there is no fuel left to consume, and the star’s outer layers are blown off and drift away. These expanding shells of gas are ionized (this is the planetary nebula we see as glowing clouds) by the hot remnant core of the star, which slowly cools over time to become a white dwarf. The planetary nebula eventually dissipates. Observations of the Stingray Nebula in 1989 thus naturally led astronomers to conclude that SAO 244567 was a post-AGB star, since it had already produced a planetary nebula.

But spectra taken in 1971 and analyzed in 1995 indicated the star was still evolving at the time, meaning it would have made the transition from giant to post-AGB in twenty years, which is far too fast for any known evolutionary models.  Further, the 1971 observations yielded an effective temperature of 21,000 K for the star, but in 2002 different observations found the star to be at 60,000 K. Spectral observations in between those times support the star growing steadily hotter, though it appears lately (since 2006) to be cooling again slightly. That is a massive change in temperature in roughly thirty years.

Reindl et al. used observations taken between 1971 and 2006 to try to figure out what is going on with this rapidly evolving star. Spectral observations from a range of both space and ground based telescopes were compared against stellar atmospheric models to find not only the effective temperature, but also the mass loss rate, wind velocity, and surface gravity of the star between 1971 and 2006. See Figure 2 for their results, which all show rapid rates of change. 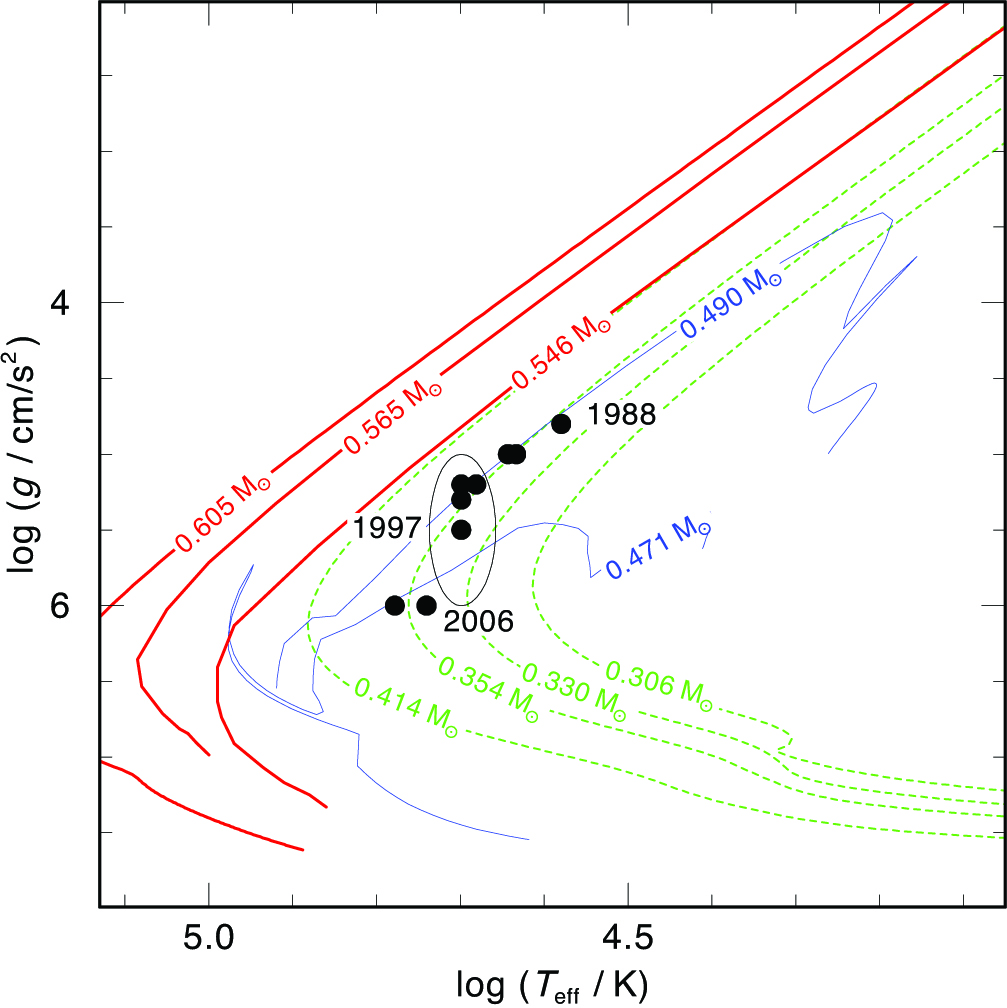 Figure 3. Red, blue, and green lines show stellar evolutionary models for post-AGB, post-EHB, and post-RGB stars, respectively, with individual models labeled by the star’s mass. Black points represent the derived values for SAO 244567 from this work, which do not quite match any of the models shown, but could be explained by minor modifications to a few of the existing models. Credit: Reindl et al.

These results can then be checked against evolutionary models to explain what kind of star SAO 244567 is. For these results, see Figure 3. The problem is still the star’s rapid evolution. It fits roughly on the track for a .53 solar mass star in the post-AGB phase, but a star of that size should have taken 130,000 years to make the 40,000 K temperature jump that SAO 244567 made in only 30 years. The authors suggest this star could have undergone a late thermal pulse, which is when a post-AGB star’s helium shell re-ignites, sending it back to the AGB for a brief period of time. This solution would explain the star’s rapid evolution, and even the decrease in temperature seen in the latest spectra, but there are no comprehensive evolutionary models to explain this scenario.

Another option from the evolutionary models is that SAO 244567 was small enough not to enter the AGB phase, and instead sits on the EHB. In this case, it never shed its outer layers, so the planetary nebula must have been ejected during a common envelope phase with a companion star. This solution still does not explain the star’s rapid evolution though, unless other factors are also at play. Additionally, the only observed companion to SAO 244567 is too far away to be responsible for this scenario.

Observations over the coming years could answer the mystery of this star. If it continues to cool down and increase in brightness, that will support the post-AGB, late thermal pulse scenario. If, on the other hand, a closer companion is found, the common envelope solution may be more viable.