We have long known that Vega–one of the brightest stars in the sky–is surrounded by a considerable amount of dusty debris. As our data has improved, our picture of this dust has become clearer. It now appears that the dust is concentrated in three belts around the star. At about 100 AU from the star there is a cold belt, analogous to the Kuiper belt in the Solar System, which radiates primarily in the far-infrared; at 14 AU there is a warm belt, analogous to our asteroid belt, which radiates in the mid-infrared; and at  less than an AU there is hot dust, which radiates in the near-infrared. The warm asteroid belt was discovered only recently (in 2013), as described in this astrobite.

Debris disks are exciting because they provide insight to a star’s planetary system, even if we cannot detect the planets themselves. The gaps between debris belts may result from planets in those regions, which gravitationally clear away the debris. In this paper, Raymond and Bonsor run computer simulations exploring the dynamical connection between Vega’s debris belts and hypothetical planets in this system. 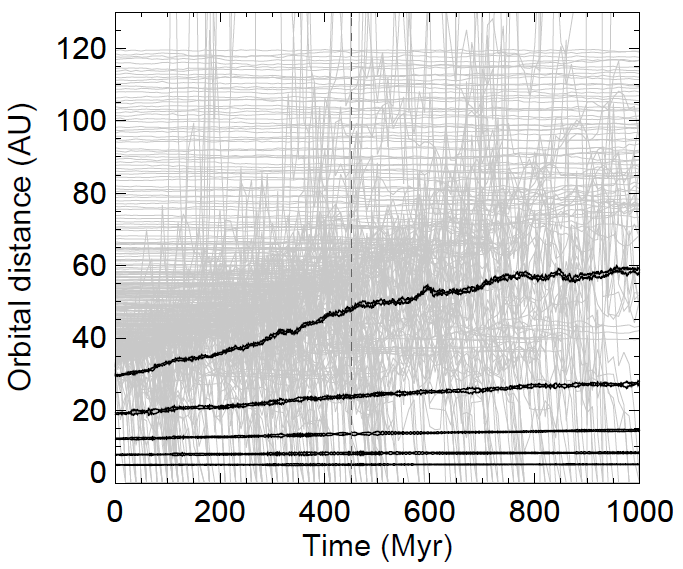 Figure 1. Simulations showing the planetesimal-driven outward migration of 5 planets over time. The dashed vertical line is the current age of Vega.

A key realization is that the hot belt, if left alone, would dissipate in a very short time (about one year). Thus, the dust in this region must be constantly resupplied from material farther from the star, likely from the outer cold disk. Planets provide a natural way to move smaller bodies in a planetary system; a planet near the inner edge of the cold belt could gravitationally scatter planetesimals from this belt inwards.

Figure 1 illustrates the results of one of the authors’ simulations involving 5 planets interior to a cold disk of planetesimals. The black lines show the distances of the planets from the star over time, and the gray lines show the behavior of the planetesimals as they are scattered. As you can see, the planets do migrate with time. The planetesimal-driven migration theory works! Note that only the outermost planets need to migrate a substantial distance for this process to function.

Next, the authors tried to determine if this method could send enough material into the inner part of the system to sustain the hot belt. They ran several simulations, varying the masses of the 5 planets. The results are shown in Figure 2 below. The main finding is that for the efficient inward transport of material, the outermost planet(s) cannot be too massive. If these planets were as massive as Jupiter, for instance, they would actually scatter more of the planetesimals outward, rather than inward, and the supply chain to the hot belt would not function. New instruments designed to directly image planets will be able test the prediction that Vega does not have a giant outer planet.

The authors also show that the warm belt may also arise from dust delivered from the cold belt. Thus, this warm belt might not be a repository of planetesimals like our own asteroid belt after all, but simply a signal of inwardly moving material.

In conclusion, these authors show that with measurements of a debris disk and an understanding of dynamics, much can be learned about a planetary system, even when no planets have yet been detected.

Figure 2. The rate that material could be delivered from Vega’s cold outer disk to its hot inner disk by a system of five planets of various masses (shown as the numbers under each point). The right most six points are systems for which all five planets have the same mass. Higher points are considered more successful models.