Paper: The Almagest, Book I

It has been known for quite some time that the Sun, Moon, five planets, and stars all whirl above our heads on a daily and nightly basis. These movements are however not random, but carefully choreographed, as even our ancestors began to recognize. Moon phases and eclipses are regular and predictable events, but the cause of their clockwork precision has long been speculated upon. In today’s astrobite, we discuss a monumental attempt to compile the heavenly observations of the past centuries and connect them with a geometrically-founded theory that explains all of cosmology. Importantly, this work supports, through fact and figure, the natural intuition of all humankind that we are in fact the center of the Universe. Book I of The Almagest develops its thesis through a logical chain of arguments, the main points of which we shall summarize here. 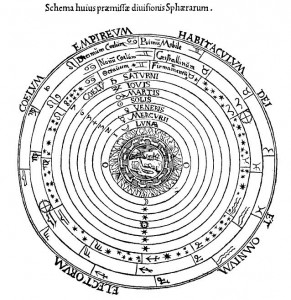 Figure 1: The nested celestial spheres with Earth harmoniously at the center. The outermost sphere contains the fixed stars and rotates around the Earth once per day. Image courtesy this site.

First, since the circle is clearly the most perfect two-dimensional shape, it being devoid of unsightly edges, it is of course natural that all heavenly motions are circular. Likewise for three-dimensional objects, a sphere could only suffice when it comes to the celestial. This fits nicely with the observation that stars, planets, the Sun, and the Moon all move in clearly arc-shaped paths across the sky. If one were to somehow combine views taken at continuous points in time through the night, I would guess that one would see circles inscribed upon the sky – “star trails“, perhaps. Figure 1 shows a cross-section of these concentric spheres, nested in perfect order with the Earth at the center.

But what about the Earth’s shape? It has been argued at length (see this astrobite) that it is most logical that our Earth’s surface is a flat plane extending infinitely in all directions. For what curvature do we see when gazing from our doors across the land? The author sets the record straight by combining insights from previous scientists with additional observations. In particular, Ptolemy notes that eclipses and sunsets happen at differing local times, and that the time was always later westward along a line of constant latitude. The only explanation for this (as well as the differing shadow lengths at Syene vs. Alexandria, as shown by Eratosthenes, and the dipping of ships’ masts at a great distance, as shown by Aristotle) is that the Earth’s surface is in fact, curved, and that it is thus in its entirety a sphere.

The implications of this revelation are confounding. If we are a(n apparently gigantic) sphere, why do we not fall? The author answers that since objects fall toward the center no matter where on the surface of the sphere they are dropped, that same “force” must support the Earth from all sides equally. Who needs integral calculus with this kind of prescient intuition!

The author then turns to the question of where the Earth is located within the Universe. Obviously a sphere could be moved (or rotate about an axis). But if the Earth were anywhere but the center of the sphere containing the stars, then the motions of the stars would appear uneven. Since they do not, it is clear that we must be at (or actually near, as Ptolemy later describes) the center. Rotation is a more tricky question. The apparent motions of the heavens could just as well be described by the rotation of the Earth as that of the sphere of stars. But if the Earth were rotating, argues Ptolemy, unburdened by any yet-to-be-discovered laws of physical motion, the stationary air would whoosh all objects left free on its surface in reverse direction to the rotation. Since this is clearly not observed, it must be the heavens in motion, never mind the seeming absurdity (and clearly superluminal motion) of an unimaginably large sphere revolving once every 24 hours. Sometimes the implausible truth is revealed only by systematically deconstructing all other possibilities. 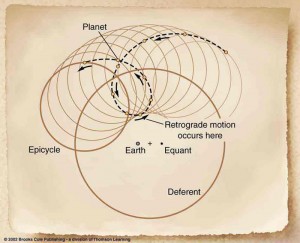 Figure 3: A planet in a circular+epicyclic orbit around the Earth. The superposed motion is shown as a dotted line. Note that Ptolemy recognized that the orbits were slightly eccentric – Earth is slightly displaced from the center of the circle. Image courtesy this site. 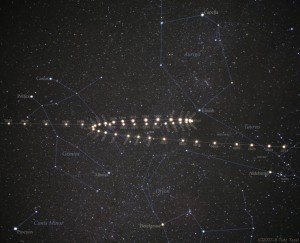 While the above explains very well the Earth, Sun, Moon, and stars, the motions of the planets have confounded theorists for generations. Planets appear to move at uneven speeds across the sky, sometimes appearing to even move backwards (i.e., retrograde – see Figure 2). The key insight here (though not one a unique to Ptolemy) is that of the epicycle: a smaller, also circular (of course) orbit superposed on the body’s original circular orbit. If the epicycle is aligned edge-on to our line of sight, the appearance would be that of a body moving along a straight line, but at different speeds (and sometimes different directions) depending on the epicyclic phase (see Figures 2 and 3).

And so, there it is. We exist on a spherical Earth, at the center of concentric spherical shells containing all observed celestial bodies. Circular motion — often epicyclic in nature — explains planetary motions, and the stationary distant sphere of the stars rotates around us once every 24 hours. It seems that very little science will need to be done in the next several centuries at least. For without a doubt, this doctrine has been carefully and commandingly enough asserted that it will hold sway for many, many generations to come, until at some point some brave soul will once again remember that science is not about facts or authority, but about daring to question and relentlessly seeking to unveil the truths behind the veil of our observations.

Author’s Note: While clearly Ptolemy didn’t get it all right, his model was nevertheless an extraordinary scientific achievement for its time. It represents one of the first large-scale attempts at using logic, reasoning, and mathematics to explain a complex set of observations. It is easy in the 21st century to make light of the fact that anyone could have ever thought of a geocentric Universe as being remotely plausible, but the scientist of 2000 years ago lacked the extensive data and the centuries of accumulated methodology and wisdom that have come since then. I often wonder what “obvious” truths of our era will turn out to be as “ridiculous” to our distant descendants. For a modern retelling of (and perspective on) The Almagest, I highly recommend this website.

This article’s posting date and unusual tone (for astrobites) may or may not be coincidental.