The Echoes of a Supernova

Space is inconceivably huge and the distance between objects is vast. As a result, astronomical events tend to play out over a very long time scale in comparison to a human lifetime. Most of the time, to watch the cosmos is to watch something marvelous happen in extreme slow motion. In stark opposition to this tendency, and of particular personal and academic interest to astronomers, are the so-called transients: astronomical events that last for a very short amount of time, on the order of hours or days or weeks. The most common examples of transient events include supernovae and gamma ray bursts.

Unfortunately, observing these fleeting events can be as difficult as it is exciting. The characteristic timescale of transients is so short that astronomers are rarely able to observe the event from start to finish. Too often are supernovae noticed days or weeks after the explosion, when the light is already beginning to fade. But, there is hope! A phenomenon known as “light echoes” provides a means of seeing the event unfold, even long after it has passed.

Light echoes are very much analogous to sound echoes. A sound echo is produced when sound waves scatter off of objects. When the distance between the object and the observer is large enough, the sound from the object arrives at a noticeably later time. With light echoes, light is scattered off of regions of dust. If the dust is sufficiently far away from the source, we may be able to see a sort of replay of the event years or decades after the event occurred. The authors of today’s paper examined the light echoes from several historic supernovae, including the famous Supernova 1987a and explain the latest techniques in analyzing this ghostly light. 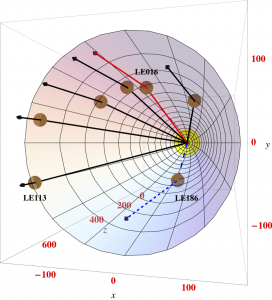 Fig. 1 – Light echoes scatter from multiple dust structures, yielding spectroscopic information from various lines-of-sight. The center of the yellow region is the transient source and the brown circles represent the dust regions that scatter the light. The blue and red lines represent the most extreme northward and southward lines-of-sight. (source: Rest, et. al. 2014)

The spectra of the transient can be determined by collecting spectra from the dust regions. The dust spectra must be corrected to account for changes in the spectral lines due to the physical characteristics (like density) of the dust itself. A unique opportunity for astronomers presents itself when light echoes are scattered by different dust structures. This allows astronomers to study the spectra of a single event from multiple perspectives: a method known as 3D spectroscopy (Fig. 1).

This has promising implications for supernova research. For example, the spectra for the supernova Cas A was obtained from three dust structures in work published in 2011. The astronomers discovered that the spectrum from one of them was blue-shifted significantly more than the other two. This suggests that the explosion was quite asymmetric. The authors of today’s paper emphasized the importance of this measurement: “This appears to be the first instance where the structure of the SN remnant can be directly associated with asymmetry observed in the explosion itself.”