Some of the most violent phenomena in the Universe, such as the mergers of neutron stars and black holes, are expected to produce gravitational waves. These are perturbations in the geometry of spacetime; they change the distances between objects as the wave passes through a region in space. Their measurement would open a whole new window into the astrophysics of these phenomena. But achieving this is hard: experiments such as LIGO, which operated until 2010, Advanced LIGO, coming up soon, and eLISA, to be launched in 2028, look for tiny perturbations in their detector geometry caused by passing gravitational waves. The authors of this paper explore a different type of gravitational wave detector: the Sun.

Sound waves occur naturally in stars as a consequence of turbulent convection. They can be observed and indeed have been with satellites such as SOHO (looking at the Sun) and COROT and Kepler (for other sun-like stars). When gravitational waves pass through a star, they also excite sound waves that propagate through it. Sound waves produced by both sources can be measured by making maps of the velocities of rising and sinking blobs of gas on the surface of the Sun (these maps are called Dopplergrams). Could gravitational waves passing through the Sun be measured using current technology? 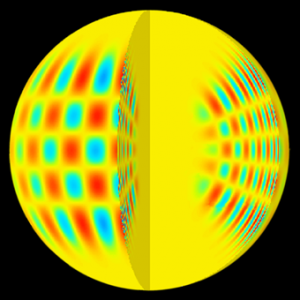 Example of a mode of vibration excited in the Sun. Each mode is characterized by the number of nodes in the radial direction and the geometry that it displays on the surface. Source of this image: wikipedia.

A sound wave in the Sun can be described by a sum of “modes”. Each mode describes the acoustic vibration of the Star in terms of the number of nodes of the wave along the radial direction in the star and the geometry that the perturbation presents at the surface (how many blobs are seen and what their distribution is). An example is shown in the figure to the right. When a gravitational wave passes through the Sun, it excites these modes, making the blobs of gas on the surface go up and down with velocities that depend on the amplitude and the frequency of the gravitational wave.

The authors calculate the typical velocities that would be observed in the surface of the Sun for a fixed amplitude and different frequencies of the incident gravitational wave. The results are shown in the figure below. The red line shows the resulting velocities of the surface blobs as a function of the incoming gravitational wave frequency for all modes of excitation. Cyan, magenta, green and blue lines show some of the modes that add up to create the red line. The peaks correspond to frequencies for which the Sun resonates: it rings loudly because the gravitational wave has a frequency that is preferred by the structure of the star. Yellow and green points correspond to different models of the Sun (current observations of the Sun do not allow us to distinguish between the two models). 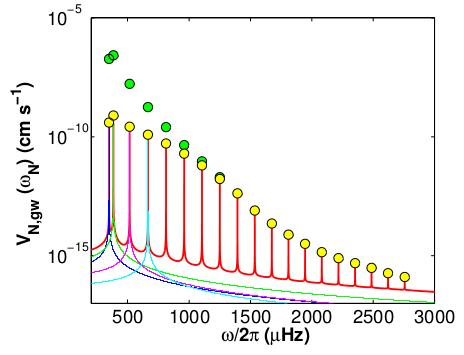 The velocities of the blobs going up and down on the surface of the Sun when excited by a passing gravitational wave of different frequencies. The two sets of points represent the peaks occurring at each mode for two different models of the Sun (yellow and green). The red line shows the full spectrum of modes; other lines show the contributions of the first few modes to the red line. Figure 4 of Lopes and Silk.

Given the size and mass of the Sun, there is a range of gravitational wave frequencies it is most sensitive to. Notably, in that range, the Sun could be 100 times more sensitive than eLISA to gravitational waves from nearby binary systems. However, if we want to distinguish sound waves caused by turbulence from those caused by gravitational waves, we will first need to solve many remaining uncertainties in the theoretical modeling of the solar structure. Gathering more data to test these models is crucial. And the Sun is only one star: imagine the advantages of having an array of stellar detectors spread out in our Galaxy.