Ten years ago, it was hard to imagine we could discover hundreds of planets orbiting distant stars, much less study their atmospheres. Today, finding exoplanets is old news, and measuring their atmospheric properties is the next frontier.

The focus of today’s paper, however, is Titan—much closer to home than a far-flung exoplanet. Titan is Saturn’s largest moon, and is renowned for its thick, hazy atmosphere. Since our Solar System is home to worlds that are much closer and easier to study than faraway exoplanets, it makes sense to learn as much as we can here before blindly venturing further afield.

It also helps if we can observe Solar System worlds in the same way we observe exoplanets. Generally, this means staring at a star like the Sun and watching something pass in front of it—an event called an occultation. In Titan’s case, this isn’t so easy, because we can never see Saturn (or Titan) occulting the Sun as viewed from Earth. But NASA’s Cassini spacecraft can.

This paper uses Cassini‘s infrared eyes to watch the Sun appear to pass behind Titan and light up its atmosphere. From these observations, the authors model different components of the thick atmosphere, and gain new insights about how exoplanets with similar hazy atmospheres might look.

The animation below shows a simulated sunset through Titan’s atmosphere at four different infrared wavelengths. The sun discs that “disappear” more quickly correspond to wavelengths where Titan’s haze or specific molecules like methane are absorbing lots of light.

Model of the Sun setting through Titan’s atmosphere at different wavelengths. The small dot on the left indicates the Sun’s altitude. From left to right, the large discs show how sunlight is absorbed at 1.0, 2.9, 3.4, and 4.5 microns. The haze in Titan’s atmosphere absorbs light most strongly at 1.0 microns, and more weakly at longer wavelengths. In addition to the haze, methane absorbs lots of light at 3.4 microns, and carbon monoxide contributes at 4.5 microns. Figure from T. D. Robinson’s website and resized with ezgif.

Haze can be a pain when it comes to exoplanets. It is difficult to disentangle haze effects from other atmospheric processes, so modelers often simplify the situation by assuming that atmospheric haze is “gray.” In other words, they assume it absorbs light at different wavelengths in the same way. But Titan begs to differ. 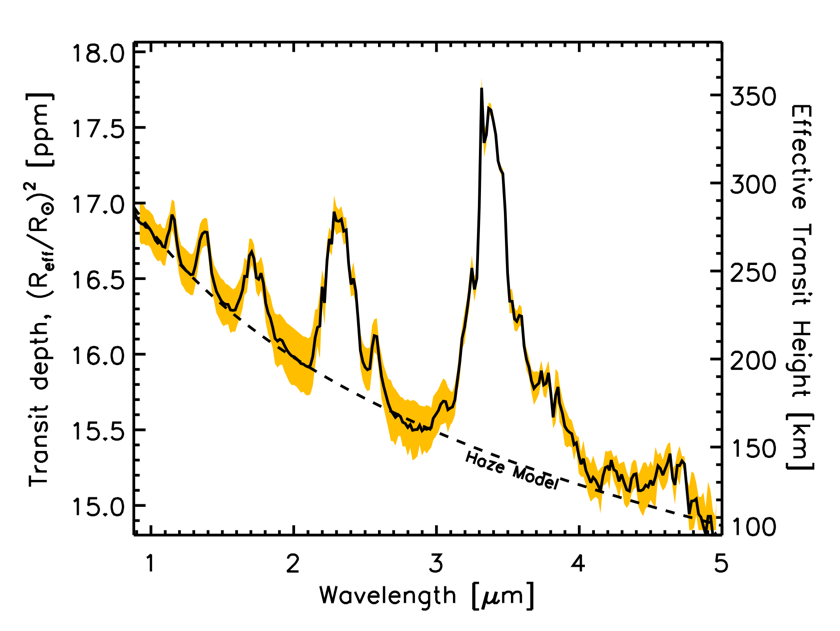 Characteristic spectrum of Titan’s atmosphere. As a function of infrared wavelength, this shows the signal received as Titan passes in front of the Sun (left y axis) and, equivalently, the effective depth light can reach in the atmosphere (right y axis). Absorption spikes are primarily due to methane, other hydrocarbons, and some carbon monoxide. The shaded regions indicate uncertainties from averaging four observations together into the solid line, and the dashed line is the best-fit haze model. If they haze were “gray,” this line would be horizontal. Figure 5 from the paper.

When Robinson et al. averaged together four observations of Titan’s atmosphere, they confirmed that high-altitude hazes absorb a lot of light. In addition, they found Titan’s haze was anything but “gray.” This is illustrated in the figure to the left, because a horizontal line for a gray haze model would not fit the observations. Instead, Titan’s haze absorbs lots of light at shorter wavelengths and lets more light pass through at longer ones.

In the coming decade, telescopes like NASA’s James Webb Space Telescope will enable us to observe exoplanet atmospheres in much the same way as Cassini observed Titan. As the data pour in, our own Solar System will serve as an important benchmark for understanding these distant, alien worlds.