The American Astronomical Society announcement earlier this week that they will no longer print physical (paper) editions of their publications. This represents a major and monumental change for one of our field’s most venerable institutions and its widely read and cited journals, including the Astrophysical Journal (ApJ) and Astronomical Journal (AJ). How does this reflect on the current state of academic publishing, and what does it suggest for the future of the literature that Astrobites digests?

The AAS journals have been continuously printing high impact and authoritative peer reviewed research for more than a century. The AJ was founded in 1849, the ApJ in 1895. As the ApJ’s web portal frontpage proclaims, “Many of the classic discoveries of the twentieth century have first been reported in the Journal.” It will be of no small significance, then, when these journals transition to purely digital publications in 2015.

This evolution will surprise few of the journal’s readers and authors. As AAS Director of Publishing Chris Biemesderfer wrote in the Society’s press release, “Over the past decade the number of print subscribers to the AJ and ApJ has dwindled, while the number of electronic-only subscribers and the amount of content published in the journals have both increased.” The Society has considered its electronic version the edition of record for 15 years, according to Biemesderfer, and this is certainly the version that most scientists interact with today. 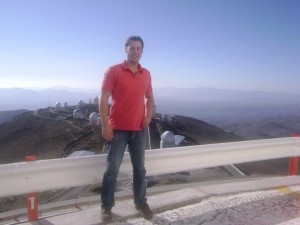 Chris Erdmann, Head Librarian at the John G. Wolbach Library at the Harvard-Smithsonian Center for Astrophysics.

I sat down with Chris Erdmann, Head Librarian at the John G. Wolbach Library at the Harvard-Smithsonian Center for Astrophysics (CfA; my host institution) this week to discuss this shift and what it signals for practitioners in the field of astronomy and academic publishing generally. Chris recognized the need for this policy shift at the AAS and indicated that it would be welcomed by most librarians, who already face increasing pressure to limit the volume of physical collections that they commit to housing and archiving.

Several years ago, the Wolbach Library–one of the world’s largest and longest-operating repositories of astrophysical research documents–ended its subscription to the physical journals. This decision was not made lightly, and only after consultation with SAO/NASA Astrophysics Data System (ADS), USNO Library, the AAS library liaison, and the CfA Library Committee. Indeed, few libraries have continued to maintain and update an institutional archive of the paper journals.

Chris works as a facilitator for scientists needing to learn from and integrate information and data from previous works into their own study. From that perspective, the AAS move to electronic-only publication is just the first in a longer series of reforms needed for the Society’s journals to fully participate in the future ecosystem of scientific communication and collaboration.

The role of traditional academic publishers like AAS is being challenged by newcomers like PLOS, PeerJ, and eLife. These journals are digital natives that emphasize their online editions, including web-exclusive content and features like video attachments, article metrics, and post-publication commenting and peer review. Given the critical role that the AAS has played in the evolution of astronomy to date, Chris is hopeful that the Society can thrive amongst these digital publishers by adopting many of these capabilities.

Thinking about digital tools that could play a critical role in driving open and reproducible science further in the near future, Chris points to mechanisms for interactive data visualization like the iPython Notebook. If journals could host iPython Notebooks alongside articles, scientists could make their data reduction and analysis code freely accessible, archivable, and citable, while simultaneously supporting interactive display of their research results. Notebooks are currently enjoying surging adoption among astronomers and other scientists.

Archival Practices in the 21st Century

Paper archives have played a critical role in the development and preservation of knowledge in our field. Also housed in the Wolbach Library is the SAO/NASA Astrophysics Data System (ADS), which all astronomers know and love as their gateway to the historical astrophysical literature. The ADS has painstakingly scanned historical print editions of many journals to produce web-accessible digital copies. Even with the full corpus of ApJ and AJ scans now completed, Chris says that the ADS staff still frequently pull volumes from the Harvard University Depository to re-digitize pages with scanning artifacts or other errors.

Inextricable from the AAS’ move to electronic publishing is the question of who will keep the indelible archive of today’s journals’ digital content? This has added concern now that the volume of that content (including videos, massive datasets, and software) so exceeds that which can be printed on a page.

In our conversation, Chris highlighted the ZENODO project, led by CERN, which seeks to serve as an inter-disciplinary and cross-institutional repository for digital content of all kinds related to scientific research (including code). The Society now officially archives its online content through Portico. Services like Portico and ZENODO may be the future equivalent of an institution like the Depository.

The AAS faces a critical challenge in how to approach its increased focus on digital publishing. We have entered an era of experimentation and diversity in academic publishing completely unlike anything seen in living memory. By virtue of their longstanding tradition at the forefront of literature in our field, the AAS has to strike a careful balance. The risks taken and new practices tested by AAS journals will be permanently archived and, as with the ADS paper scanning project, may be continually revisited for decades or centuries to come. The AAS must successfully compete with the journals of the digital age, while simultaneously respecting and upholding the deep community trust that it has built throughout the history of American astronomy.

AAS Summer meeting in Indianapolis: The abstract deadline is approaching!