Today, I hoped to present an analysis of Paul Feyerabend’s “Against Method,” a revolutionary work in the philosophy of science. Digesting this intricate treatise—not to mention formulating novel opinions interwoven with witty commentary—apparently takes a while, certainly longer than the 12 hours I allocated. I’ll just quote, as a teaser for when I finally get my act together, the takeaway maxim for scientists: “Anything goes.”

Anywho, the Astrobites gods demand a post and I dare not anger them. So, let’s explore the first paper on the latest online list of papers in the Earth and Planetary Astrophysics section of the arXiv. (This is just another illustration of the well-established fact that it pays to time submissions to the arXiv so that your paper is released at the top of the relevant announcement. Don’t hate the player, etc.)

This paper reports that measurements of near-infrared albedos made with the Wide-field Infrared Survey Explorer (WISE) serve as a proxy for surface composition. Because these data are available for >2835 asteroids, the correlation between albedo and taxonomy may facilitate the selection of targets for extensive follow-up observations.

The Main Belt of asteroids, located between Mars and Jupiter, contains ~1 million objects larger than 1 km with highly varied compositions. In total, their mass sums to less than a tenth of Earth’s Moon. These asteroids are classified into many types based on the inferred compositions of their surfaces. Every specialist has their own favorite scheme, but three general categories are carbonaceous (rich in organic molecules), silicate (rocky), and metallic (predominately iron).

Decades ago, scientists thought that different asteroid types were neatly sequestered into their own regions of the asteroid belt. Each type therefore reflected the conditions that prevailed in that part of the accretion disk during the formation of the Solar System. Now, however, we think that the formation of the Solar System was quite chaotic. And, indeed, diverse kinds of asteroids are found all throughout the Main Belt.

Determining the detailed composition of an asteroid is quite difficult. Asteroids are small, not terribly hot, and far away, so it takes a big telescope or lots of patience to collect enough photons to make the kind of high-resolution spectrum that you need to discover and quantify the abundances of all possible constituents. What’s much easier is measuring the brightness of an asteroid using a filter that lets in light within a range of wavelengths (aka waveband). If you have a model for the thermal radiation (intrinsic emission due to its own temperature) and geometry (shape) of an asteroid, you can subtract that from the observed light, yielding the amount of reflected sunlight. Calculating the ratio of the observed reflection to the amount of sunlight incident upon the asteroid gives you the asteroid’s albedo in that waveband.

Disentangling the effects of geometry, thermal emission, and albedo is nigh impossible if you only have measurements in one waveband. Observations in multiple wavebands, however, provide enough constraints to independently determine these parameters with only a few assumptions about the thermal structure of asteroids.

Masiero et al. use observations from the WISE survey of the entire sky in four wavebands, along with data from the two lowest-wavelength wavebands taken after the end of the fully cryogenic portion of the WISE mission. This later survey is known as Near-Earth Object WISE (NEOWISE). They focus on the albedos in two wavebands: 3.1-3.8 um (W1) and 4.1-5.2 um (W2). Their primary results are plotted as a function of asteroid diameter in Figure 1, with albedos in W1 separated into three groups (pink, black, and green in panel a). Because of selection bias, there are few detected objects with low diameters and albedos—these objects are extremely faint.

Figure 1 (Masiero et al., 2014). Albedos of >2800 asteroids in two wavebands, W1 (left) and W2 (right), as a function of asteroid diameter (determined from fits to the photometric data). Observations in W1 seem to be clustered in three groups.

These albedos are compared to the distribution of W1 albedos for 8 families of asteroids, each with >20 measured members, using data from previous papers. The range of albedos for each family are plotted as histograms in Figure 2. The exact nature of each family isn’t terribly important—the key point is that the W1 albedos of each family are tightly clustered. The three most prevalent families have W1 albedos that cluster in the three groups plotted in Figure 1 (which includes ~100x more objects). So, if you know the albedo of an asteroid, you have a fair chance at guessing the family to which it belongs. 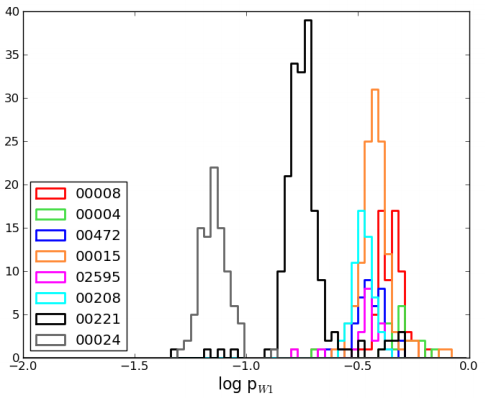 Figure 2 (Masiero et al., 2014). Albedos in the W1 WISE/NEOWISE waveband for 8 families of asteroids that have at least 20 characterized members. Note that each family only manifests a relatively narrow range of albedos. See the paper for details about the individual families.

Photometry (measuring brightness in several wavebands) is a cheap alternative to spectroscopy (measuring brightness vs. wavelength at high-resolution) that still provides useful information. Masiero et al. found that asteroid families have relatively narrow ranges of albedos in the W1 WISE/NEOWISE waveband, corresponding to clusters of albedos measured throughout the Main Belt. Thus, near-infrared albedo is a quick proxy for surface composition. Of course, more work is required to validate this approach. Understanding the asteroid belt is key to understanding the formation and early evolution of the Solar System, so expending this effort will continue returning rewards.