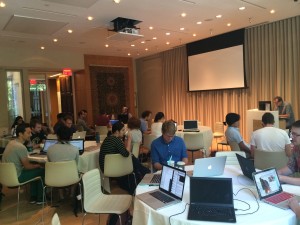 Last week, I attended the annual SciCoder workshop with fellow Astrobite author Adele Plunkett and about 30 other students and postdocs. SciCoder is an annual workshop in New York City for early-career astronomers with the tagline: How I Learned To Stop Hating Coding and Start Getting Things Done.

Our guide for the week was Demitri Muna. He told a story about when he began graduate school, and at that time he assumed his peers were just as obsessed with the inner workings of computers as he was. He was dismayed to learn that many graduate students were never formally taught proper computing techniques, and were essentially reinventing the wheel to perform basic tasks. Thus, SciCoder was born.

While SciCoder’s target audience is graduate students and postdocs, there were a couple of undergraduate attendees too. If you’re interested in diving deeper into astronomy research and want to get a head start, consider making SciCoder part of your summer next year.

Over the course of one week, we were inundated with tips and tricks for all manner of things related to computers and astronomy. We had several opportunities to practice our new skills with research-inspired problems. Here are some of the main lessons I took away.

Curious to know more details about what we learned at SciCoder? Feel free to get in touch via twitter, or leave a comment below.