Mercury is an intriguing little planet. It’s small, hot, and in orbital resonance with the sun. It’s also really, really dense, much denser than the other rocky planets in the solar system. As all the rocky planets formed out of the same protoplanetary dust, you’d think they’d be of roughly the same composition, but whereas the Earth and Venus are about 30% iron by mass, Mercury seems to be more like 70%. That’s a lot, and it complicates our understanding of how planets form. Mercury’s weirdness points to weirdnesses in planet formation that we haven’t yet sussed out. 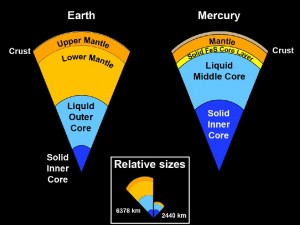 A rough comparison of Earth’s and Mercury’s composition. (NASA)

Astronomers have proposed a variety of theories to account for Mercury’s high iron content. Maybe something happened after the planet formed that caused a bunch of its less dense silicates (i.e. rocky material) to evaporate. Maybe a giant collision knocked off a hunk of Mercury’s rocky outer layers, leaving behind iron in a new high proportion.

Or, as a today’s paper proposes: What about magnets?

Hubbard sees a need for a new explanation for Mercury’s density as the MESSENGER mission’s measurement of Mercury’s K/Th (Potassium to Thorium) ratio [pdf] contradicts a leading model for Mercury’s formation. The K/Th ratio is representative of the ratio of silicates to metals in a planet’s composition, and indicates the conditions of a planet’s formation. If Mercury ended up dense because its silicates evaporated post-formation, you would expect it to have a low K/Th ratio: potassium is more volatile than silicon, so if conditions allowed for silicon to evaporate, the potassium would have gone, too. Instead, MESSENGER found a relatively high K/Th ratio, in step with that of the other rocky planets. This contradicts the volatility/evaporation model. 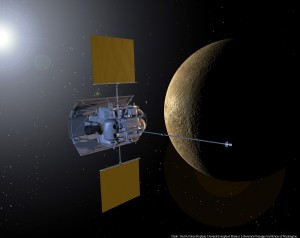 MESSENGER visits Mercury and tells you your volatile evaporation theory is wrong. (artist’s conception via NASA)

Naked-eye observation seems to contradict the giant impact model. Earth is thought to have survived a giant impact; the evidence is our (relatively large) moon. This model suggests that a similar event could have relieved Mercury of a significant amount of its early (silicate) surface. But then where did all of that matter go? Earth’s lost material stayed nearby. But there’s no evidence of another Mercury’s worth of material hanging out nearby, in the form of a moon for Mercury or other debris, we can probably rule this theory out.

One model Hubbard leaves in the running is photophoresis, by which light unevenly heats dust particles and causes them to migrate to cooler regions. This astrobite provides good coverage of that idea. However, photophoresis could only be active in surface layers of the protoplanetary disk. The idea isn’t discounted, but it certainly leaves room for another mechanism.

Which brings us to magnetism. It seems like a logical consideration when you’re wondering how a lot of iron all got in one place. But no one was herding planetary raw materials with a giant horseshoe-shaped magnet. (Weirdly, a search of NASA’s image collection turned up no artist’s conception for that one.) Enough complicated, competing forces are at play in the protoplanetary nebula that a magnetic model needs rigorous testing.

Hubbard establishes that conditions in Mercury’s region of the stellar nebula would have been sufficient to magnetically saturate iron. One barrier to dust particle agglomeration in the hot inner regions of the disk is that tiny dust particles in ionized gas tend to accumulate a negative charge: they repel one another. But the ability of metal-rich grains to rearrange their charges helps them overcome this charge barrier. This favors the growth of metal-rich grains over silicates.

However, once grains are large enough to be knocked around by disk turbulence (which isn’t very large at all—this happens when the dust grains are as small as a micron across) the charge barrier becomes irrelevant, and dust is knocking into all the other dust, forming larger and larger particles. The silicates get in on the action. There needs to be a way for them to be removed.

If iron-rich particles are magnetized, their interactions not only lead to faster coagulation (as magnetic attraction helps them stick to one another) but also increase the velocity of their impacts. Hubbard finds that these collisions are sufficiently powerful to shatter and erode the silicates mixed in with (or surrounding the iron). The silicates get knocked off and the iron stays stuck together, resulting in the evolution of very iron-rich particles that would eventually form the Mercury we know and love today.

Since Mercury’s composition is unique among the rocky planets, the mechanism that Hubbard proposes needs to be able to work only very close to the Sun, in the region where Mercury formed.  If the mechanism would seem to work elsewhere, it would be invalidated by the evidence of the other not-particularly iron-rich planets. Since magnetization of the iron particles drives the preferential collisions, Hubbard looked at the factors that determine whether iron is magnetized: its Curie temperature and the presence of a magnetic field. He finds a narrow window at which it is hot enough for Magneto-Rotational Instability to amplify the magnetic field but cool enough to be below iron’s Curie temperature. A sweet spot for iron-rich planet formation, right where iron-rich Mercury came to be.

Planet formation is an extraordinarily complex process that we understand through theory and models built to explain what we can see. The flood of exoplanet discovery in the last few years has expanded our sample size and diversified the planetary systems our models need to explain. But there’s still also plenty of mysterious, fascinating weirdness close to home.