Stars: steady-burning nuclear flames that pierce the darkness of space. Except when they’re not. The star known as HD 181068 is bright, but it’s no standard candle. On closer inspection, this well-studied system is actually home to three stars locked in a complex cosmic dance. Two stars similar to our Sun orbit each other, and together they orbit a giant three times more massive and at least ten times as large. This type of arrangement is called a hierarchical triple. 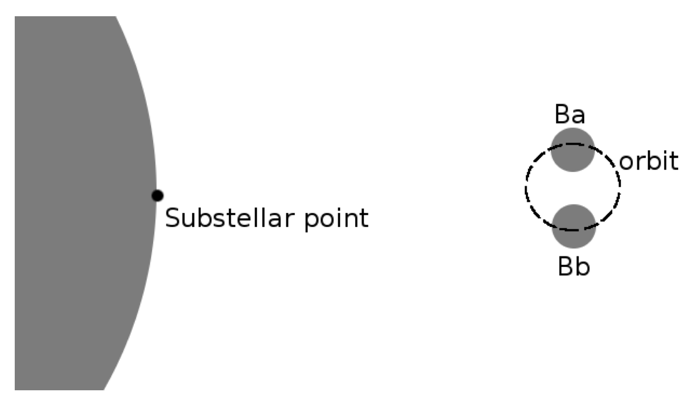 A not-to-scale sketch of HD 181068. Sun-like stars Ba and Bb are separated by about 5 solar radii. There are some 90 solar radii between giant star “A” (left) and the Ba-Bb pair. Fig. 8 from the paper.

Today’s paper looks at the family dynamics of this star system. The authors use several different sets of observations to piece together a more complete picture than previous studies. This includes Kepler light curves, X-ray images, and an optical spectrum. But none of these show HD 181068 like the figure above. It is far too distant, and the stars much too close together, for a telescope to resolve individual stars. Its secret identity as three stars was deduced based on a pattern of eclipses that repeats every 227 days.

From time to time, HD 181068 flares up and gets significantly brighter. But without more information, it is impossible to know where to place the blame—which star is responsible for the flares? The verdict comes from eclipses in the light curve: when the giant star blocked our view of its companions, and a flare was still observed, that settled it. In addition, the flares are several orders of magnitude more energetic than anything the two smaller stars can produce. The giant star must be the temperamental one. 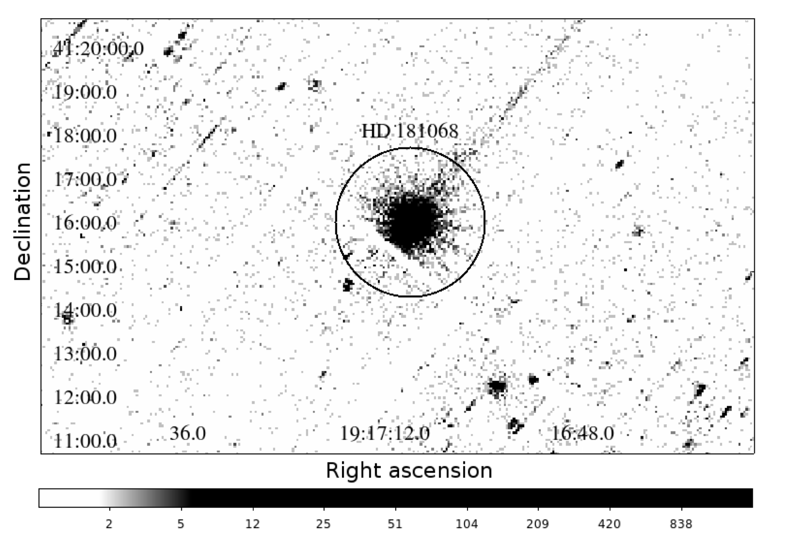 Image of HD 181068 in X-ray light, from the XMM-Newton telescope. This image was taken while the giant star blocked our view of the other two stars. Fig. 1 from the paper.

In fact, the telltale flare was only observed as it died away, and then only in X-ray light. X-ray telescopes are an engineering marvel, and let us observe invisible-to-the-eye, energetic photons that can’t penetrate Earth’s atmosphere. Most stars aren’t particularly bright in X-rays. The X-ray flux attributed to the giant star in HD 181068 tells us that it has a very energetic corona with lots of magnetic activity.

Combining eclipses, X-ray images, and flares reveals an active giant star living in a chaotic—but not unprecedented—environment. The system is classified as a type of binary called RS CVn stars, in which the main star is characterized by its star spots, flares, and energetic corona. However, the authors find that having a neighbor pair of stars affects the giant star in subtle ways that a single companion would not. In particular, the orbital motion of the binary induces a unique pattern of oscillations in the giant star’s atmosphere.

Perhaps the most interesting part of HD 181068’s unfolding story is its utility as an exoplanet system analog. Imagine scaling this family down from giant star + binary pair to Sun-like star + double planet (or planet with moon). The gravitational force of HD 181068’s smaller stars on the surface of the giant is similar to that of a “hot Jupiter” planet tugging on its Sun-like host star. As it turns out, the most interesting aspects of stars arise when they are anything but steadily-shining celestial beacons.