The Boundaries of the Supercluster

This paper gives new precision to the term “galaxy supercluster“. With a clear definition in hand, the authors also trace the bounds of our home supercluster, naming it “Laniakea”, or “Immense Heaven” in Hawaiian. 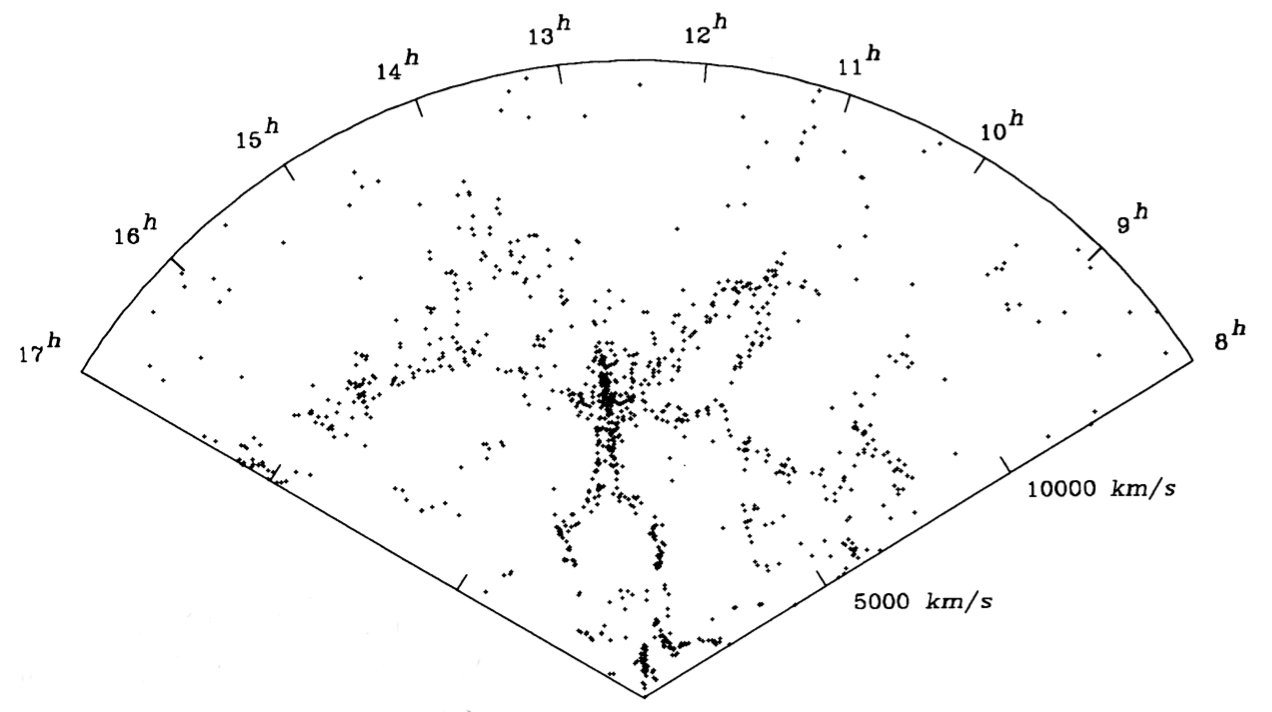 Figure 1: From the study by de Lapparent et al. 1986. Observed velocity (from the redshift) vs. right ascension. The dots represent about a thousand galaxies.

Previously, maps of the universe, on the scale of hundreds of megaparsecs, have been drawn from redshift surveys of large numbers of galaxies. Each galaxy is located in three-dimensional space by its projection on our sky and its redshift, which is sort-of a measure of its distance from us. One such project produced this amazing slice of the universe almost three decades ago (Fig. 1). Each dot represents a galaxy, and the whole map gave us a first sense that nearby structure is dominated by filaments and voids.

But Tully and colleagues were occupied by a slightly different problem than mapping galaxies. They wanted to map out the distribution of all matter in the nearby universe, including the dark matter. There’s a significant difference. For example, in the case of the famous Bullet cluster of galaxies, the dark matter and the visible matter don’t line up. And dark matter is much more prevalent than visible matter, maybe five times as prevalent (divide the cold dark matter density of the universe by the baryon density, catalogued here).

To map all the matter in the universe, Tully and colleagues used over 8000 galaxies as gravitational probes. If a galaxy was moving with respect to the normal cosmological flow, they ascribed the peculiar velocity to a gravitational attraction. Deep surveys show us that all distant galaxies are flowing away from us, the universe is expanding. But within that bulk expansion, swarms of galaxies are getting tugged by their host superclusters. A map of the peculiar velocities of nearby galaxies, therefore, will reveal which galaxies belong to our supercluster, and which are being tugged elsewhere. 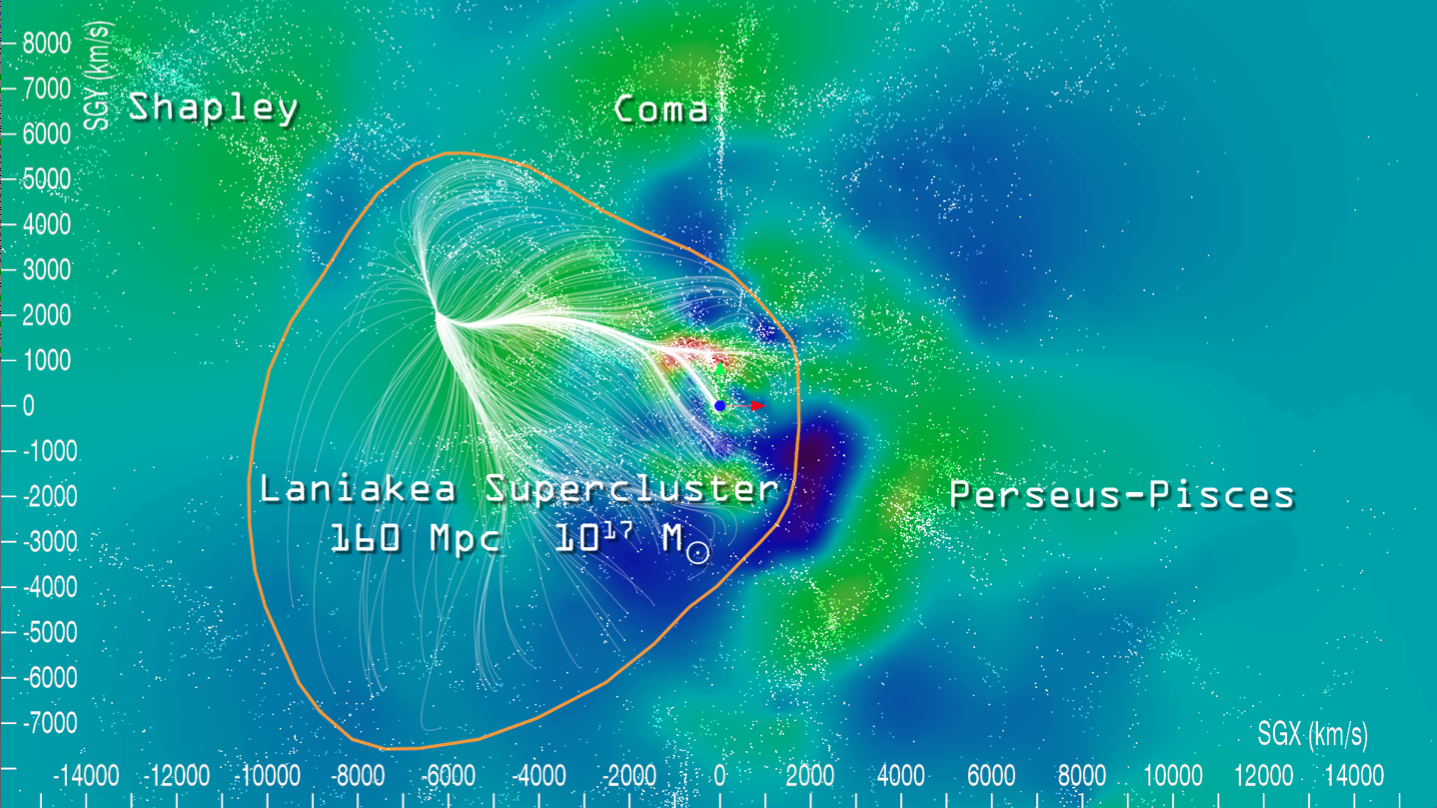 Figure 2: From Tully et al. 2014. This shows a single plane (perpendicular to the supergalactic z-axis) sliced through the center of the nearby universe. The blue dot is home. Each white dot is a galaxy. The colors represent reconstructed matter densities: blue is less matter, green is more. The white streamlines are traced through the field of peculiar velocities; they reveal the ‘drainage basin’ of our local supercluster. An orange line represents the boundary between diverging flows. Nearby superclusters are labeled.

To determine a peculiar radial velocity, the authors found a distance measurement using brightness, then subtracted the observed velocity (that is, the redshift) from the cosmological flow (that is, Hubble’s constant multiplied by the distance). All the distance measuring techniques they used compare an object’s brightness to an estimate of its actual light output. Some techniques focus on an object in the galaxy (for example a Cepheid variable or a Type Ia supernova) or a sub-populations of stars. Other techniques use the galaxy itself: its inherent ‘graininess’, its rotation rate, or a relationship between its size and range of stellar velocities. To construct their massive catalog of 8000 peculiar radial velocities they used all of these tools.

With a map of peculiar radial velocities for these 8000 galaxies extending out to hundreds of megaparsecs, the authors reconstruct the most likely three-dimensional velocity field, assuming no swirls in the flow (an assumption consistent with the standard cosmological model at this large of a scale). The underlying peculiar velocity field describes the tiny gravitationally-perturbed motions of galaxies after subtracting out cosmological expansion. Our local “basin of attraction” is the region containing all the galaxies that would contract to a single point, if we were to neglect the dominant expansion. The authors define this region as our home supercluster, Laniakea.

This is the first time the boundaries of the local supercluster have been defined. Here’s a video describing their method and showing the resulting map of the nearby universe. A slice of this three-dimensional map is shown above.