Did you finish a senior thesis this summer? Or maybe you’re just getting started on an astro research project this semester? If you, too, have been working on a project that you want to share, we want to hear from you! Think you’re up to the challenge of describing your research carefully and clearly to a broad audience, in only one paragraph? Then send us a summary of it!

Bhawna is a final year Integrated Masters student of Physics at IIT Roorkee. This work is a part of her summer research in 2013 with Prof. Pavel Kroupa and Dr. Sambaran Banerjee at the Argelander Institut für Astronomie, Bonn, Germany.

The much-debated classical scenario of star-cluster formation, first delineated by Hills (1980), suggests that the collapse of a proto-stellar core within a parent molecular gas cloud gives rise to an infant gas-embedded cluster. Subsequently, the residual gas is driven out of the cluster due to kinetic energy from stellar winds and radiation thereby diluting the gravitational cluster potential. However, pertaining to a star-formation efficiency $\epsilon$ <50% (Kroupa 2008) and slow gas-expulsion, the cluster remains fractionally bound and ultimately regains dynamical equilibrium. With the help of NBODY6 (Aarseth 1999) algorithm, we perform N-body simulations to examine the time-evolution of confinement radii ($R_f$) for various mass-fractions f of such emerging clusters. From this, we infer the cluster re-virialization times ($\tau_{vir}$) and bound-mass fractions for a range of initial cluster-mass and half-mass radii. We relate the above properties to stellar evolution and initial mass segregation in the simulation and find that primordially segregated systems virialize faster and possess a lower bound-mass fraction on account of mass loss from heavy stars and 2-body+3-body interactions whereas, stellar evolution does not exhibit significant effect. This research is the first instance where a realistic IMF (Kroupa 2001) has been utilized to perform an extended parameter scan for an N-body cluster model. 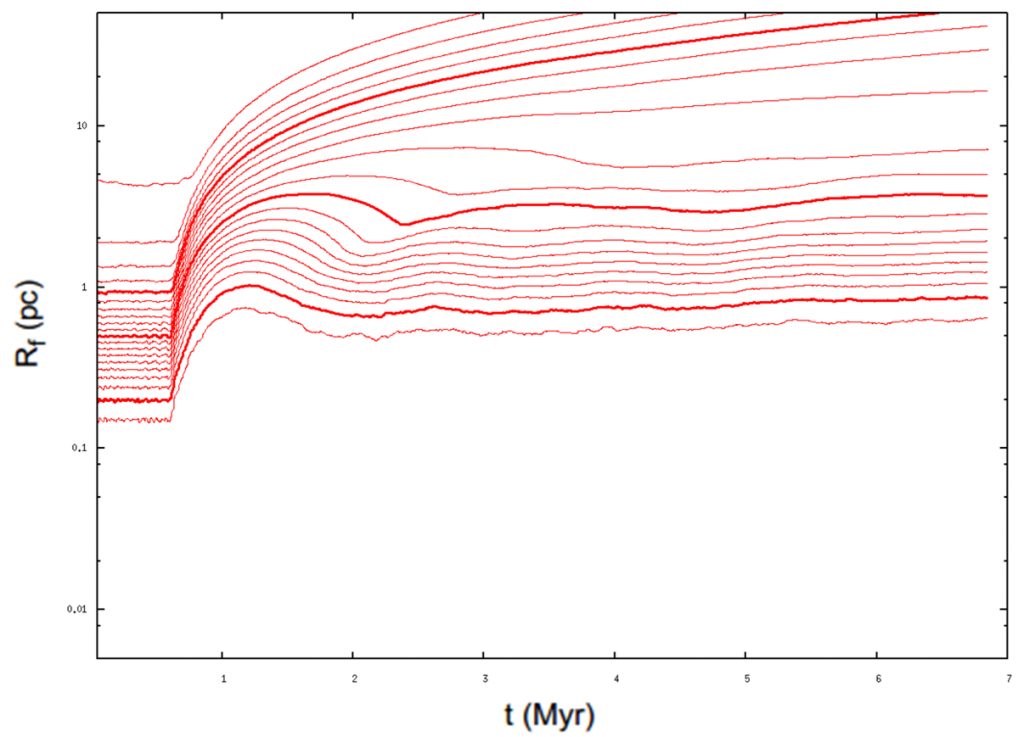 UR #3: Star Clusters and Shock-Heated Gas