A galaxy’s evolutionary path may be intimately related to its environment, which can vary dramatically from the dense environments of galaxy clusters, containing hundreds to thousands of galaxies and a lot of gas in between them, all the way to voids, large regions of space with very little gas and galaxies. Void galaxies are often smaller dwarf galaxies undergoing active star formation. Compared to their non-void counterparts, they form stars more quickly, and they have both younger (bluer) stars and more gas. As stars are born and die, they increase the fraction of metals contained within the galaxy, its metallicity. Therefore we expect these galaxies have low metallicities. Testing these expectations with observations is a valuable way to test our understanding of how galaxies form and evolve.

The authors do exactly this, by conducting observations of eight dwarf galaxies rich in neutral hydrogen gas that were first discovered via the Void Galaxy Survey. They use the Large Binocular Telescope to observe each identified void galaxy. Since it would be impossible to count all of the metals in a galaxy, and direct measurements of metallicty are challenging, astronomers often use certain spectral lines and features as tracers of metallicity, each of which have their own caveats and uncertainties. The authors of this paper focus on a few Oxygen, Nitrogen, and Hydrogen emission lines in order to do this. Finally, they select a total control sample of 34 isolated dwarf galaxies, 13 of which were identified in a previous work by their neutral hydrogen content (much like the sample void dwarf galaxies).

In order to make a good comparison to the control sample, the authors consider the non-void analog to a given dwarf galaxy as one with a similar intrinsic brightness. They compare the measured abundance of oxygen (amount of oxygen relative to hydrogen) for their 8 dwarf galaxies (red points) against the control sample (black points) as a function of absolute magnitude in Fig. 1. The oxygen abundance is used as a proxy for metallicity (lower value means lower metallicity), but since there is uncertainties in translating the abundance to a real metallicity, Fig. 1 contains 3 panels representing 3 different accepted means of calibrating this measurement. In all cases, the void galaxies (red) do not appear to be any different from the control sample (black). This is consistent with two previously observed void dwarfs (orange). I’ll talk about the green points in the next section. 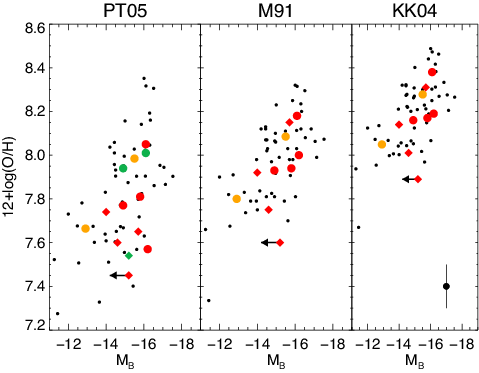 Fig. 1: The measured ratio of oxygen to hydrogen (oxygen abundance) for the void dwarf galaxies (red) and control sample (black) as a function of absolute blue (B-band) magnitude for three calibration methods. Two previously observed void dwarf galaxies are shown in black, and abundances derived from direct metallicity measurements for three of the author’s galaxies in green. (Source: Fig. 2 in Kreckel et. al. 2014).

In three of their dwarf galaxies, the authors observe the [O III] λ4363Å emission line, which can be used to directly calculate the metallicity of these galaxies, without having to rely on different calibration methods (like those shown in Fig. 1). In Fig. 1, the abundances calculated from this measurement for these three dwarf galaxies are given as the green dots. Comparing the observed metallicities of galaxies with models of galaxies evolved in complete isolation gives us an understanding of how important the flow of gas into a galaxy can be, and also how important the removal of gas from galaxies (say via supernova explosions) can be. The authors do this in Fig. 2 for their void dwarf galaxies (red) and the control sample dwarf galaxies (black) that had direct metallicity measurements. The dashed line is the expected relationship from a completely isolated galaxy model, while the solid is 1/4 of the dashed line. 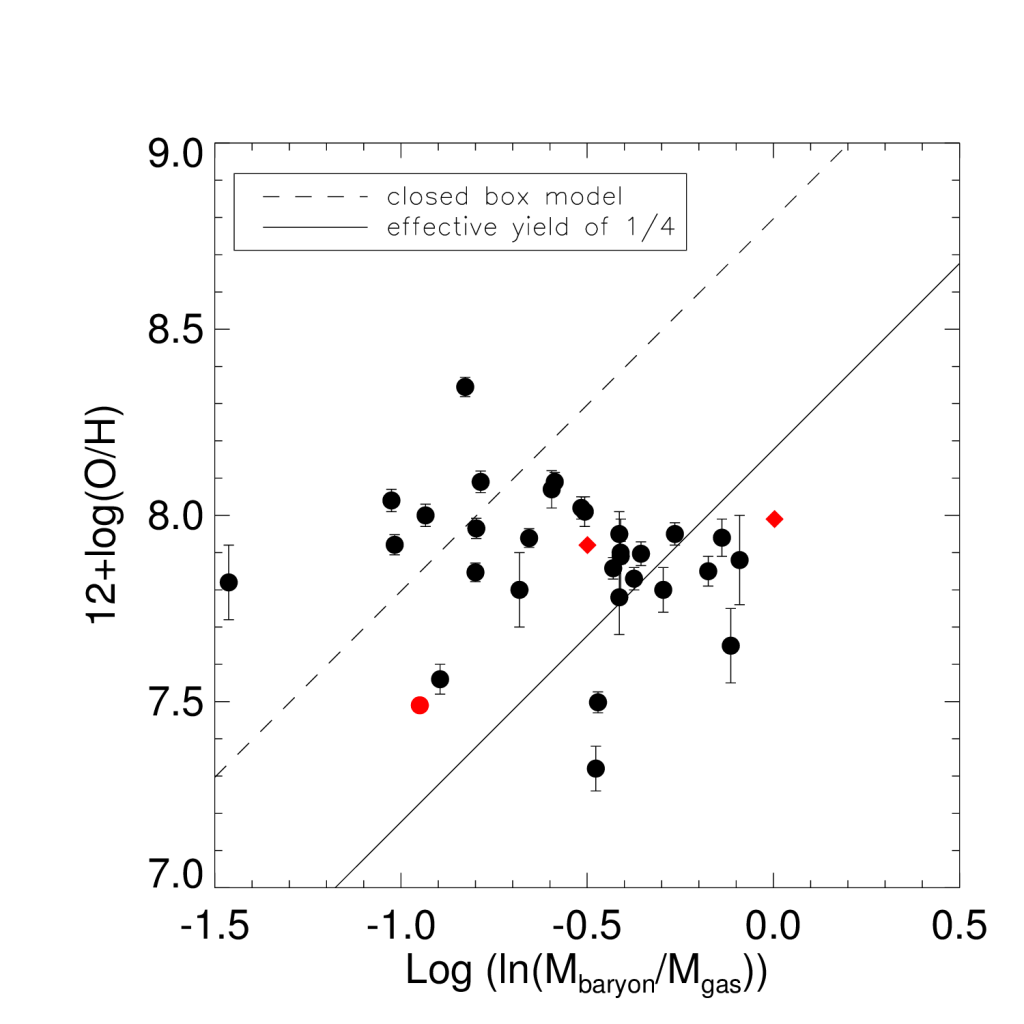 Fig. 2: The abundance derived from direct metallicity measurements for three of the void dwarf galaxies (red) and the control (black) as a function of the ratio of the observed total baryon (stars + gas) mass to just the gas mass. The dashed line is what is expected from a closed box galaxy model, and the solid is the 1/4 of the closed box model. (Source: Fig. 3 of Kreckel et. al. 2014)

Again, the void dwarf galaxies look similar to the control sample, and in general all galaxies have a lower abundance than would be expected from a completely isolated galaxy. This can occur in two possible ways: either the inflow of metal poor gas (i.e. mostly hydrogen) is very important in these galaxies, or the loss of metals is very important. Metals can be lost, for example, through supernova explosions that carry metal rich gas out of the galaxy.

The Evolution of Void Dwarf Galaxies

This final result is interesting because other observations hint that void galaxies more often have inflowing gas than non-void counterparts. This, in combination with the observation that the metallicities of the void and control dwarf galaxies are similar, indicate that environment may not have as significant an impact on the evolution of these dwarf galaxies as was expected. Even though there may be more inflowing gas, because void and non-void dwarf galaxies have similar metallicites, the authors suggest that it is the internal processes of galaxies (such as outflows of gas), and not their environments, that really determine how galaxies evolve. This work is a tantalizing indication that there is quite a lot about galaxy evolution that we have yet to learn.