Super-Earths are the Starbucks of the modern world–you can find them everywhere, its not exactly what you want but it’s just good enough to satisfy your desire for something better. Super-Earths are not technically Earth-like since they are up to 10 Earth masses and have thick hydrogen (H2) atmospheres. However, they are rocky like Earth, they have an atmosphere like Earth, and if they are in the habitable zone, there is a good chance they could have liquid water like Earth. Case and point: they are just good enough.

Unfortunately, in the next 15 years, the only way we will be able to characterize a super-Earth, is if it’s orbiting an M-type star. Since M-type stars are smaller and dimmer than the Sun, the planets orbiting them need to be closer in so that the planet get enough warmth to sustain liquid water. Therefore, habitable zone planets around M-type stars could be observed in transit once every ~20 days rather than once every year for an Earth twin. This bodes well for future missions that will try and characterize exoplanets such as the James Webb Space Telescope (JWST).

So, if super-Earths orbiting M-type stars are our best bet at characterization, it pays to think about what signs of life, or biosignatures, could hypothetically be detected in one of their atmospheres. Seager et al. investigate several biosignatures and aim to identify which are likely to build up to detectable levels in an H2-dominated super-Earth orbiting an M-type star.

To test the “build up” of any molecule, let’s say ABX, in an atmosphere, you need to know what molecular species are creating ABX and what molecular species or processes are destroying ABX. In the world of photochemistry, we refer to these as sources and sinks. The photochemical model that Seager et al. use includes 111 species, involved in 824 chemical reactions and 71 photochemical reactions. Dwell on that parameter space… A photochemical reaction occurs when a molecule absorbs a photon of light and is broken down into smaller components. We call this process photolysis and it can be a major sink for biosignatures, depending on how much UV flux the star is giving off. Let’s take Earth as an example.

Since oxygen, O2, is a abundantly produced by life on Earth, it is one of Earth’s dominant biosignature gases. O2 is destroyed by photolysis when it interacts with, you guessed it, UV light. On Earth though, UV radiation from our Sun isn’t that high, so O2 is free to build up in the atmosphere. If we were to increase the UV radiation Earth received, it is likely that O2 would all be destroyed and would cease being one of Earth’s dominant biosignature gases.

Because M stars might have a much higher UV flux than our Sun, it is uncertain how much UV flux a super-Earth orbiting an M star will receive. Therefore, in order to asses which biosignature gases will build up on an exoplanetary atmosphere orbiting an M star, we need to assess each of the bisoignature gas’s removal rate, or the rate at which a molecule is destroyed by photolysis or any other reaction. 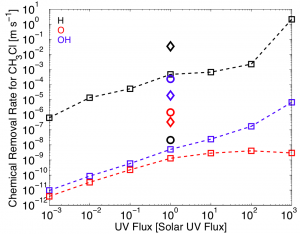 The rate at which H, O, and OH destroy CH3Cl as a function of UV flux received from the parent star. The dashed lines represent the case of a 10% N2, 90% H2 atmosphere. The diamond and the circle show cases for an N2 dominated atmosphere and a present day atmosphere, respectively, Main point: Removal rate increases with UV flux. Image credit: Seager et al. (2013) ApJ

In order to illustrate this effect, Seager et al. took a biosignature gas, CH3Cl, and calculated the removal rate by reactions with H, O and OH as a function of UV flux. As we’d expect, the figure above shows that the removal rate increases with UV flux. This means that if we encounter a super-Earth around an M-type star that has a high UV flux, the rate of removal of a biosignature gas will depend largely on the concentration of the gas and how quickly it is being destroyed by H, O and OH.

The Most Likely Biosignature Gas

After considering the removal rate of several biosignature gases, Seager et al. find that ammonia (NH3) is likely to build up in the atmosphere of a super-Earth orbiting an M star. NH3 is created when a microbe harvests energy from a chemical energy gradient. On Earth, ammonia is not produced in large quantities so there isn’t a lot of it in our atmosphere. However, if an alien world produced as much ammonia as humans produced oxygen, it may actually be detectable in their atmosphere.

In a world where NH3 is a viable biosignature, life would be vastly different from what we see on Earth. It would need to be able to break the H2 and N2 bonds in the reaction: 3H2 + N2→ 2NH3. Since this reaction is exothermic (releases heat), it could be used to harvest energy. Is this possible though? Seager et. al. say that although there is no chemical reaction on Earth that can break both bonds of H2 and N2, there is no physical reason that it can’t happen.

Thermal emission spectra for a 90% H2, 10% N2 super-Earth (10 Earth masses, 1.75 Earth radii). Each color spectrum represents a different concentration of ammonia. Higher ammonia concentrations create stronger emission features. Main point: If life was producing lots of NH3, we would be able to see it in the spectrum of a super-Earth orbiting an M star. Image credit: Seager et al. ApJ, 2013

The plot above shows what the spectrum of a planet would look like if it were producing lots of ammonia. This spectrum is taken in “thermal emission” which means that we are looking at the planet when it is just about to disappear behind its parent star. There are strong NH3 emission features (labeled) from 2-100 microns. JWST will be able to make observations in the 1-30 micron range and will likely observe at least a handful of super-Earths orbiting M-type stars. So, should we expect to find one of these NH3 producing life forms? This is where I leave the Seager et. al. paper and let your imagination take over.