The cosmic microwave background (CMB) anisotropies have long been a rich source of cosmological information. One particular feature of the CMB is the gravitational lensing distortion induced by foreground galaxy clusters. These clusters produce distortions to the CMB on arcminute scales, and provide a unique method by which galaxy clusters can be detected and studied. In particular, the CMB distortion is dependent on a cluster’s mass. Current experiments aren’t sensitive enough to precisely measure this lensing effect on the scale of individual clusters, so instead, the effect is measured using a combination of hundreds of clusters, which improves the signal to noise ratio.

In this paper, the authors use data from a 2500 square degree survey from the South Pole Telescope (SPT). The authors search for galaxy clusters using the thermal Sunyaev-Zeldovich effect (i.e. tSZ effect), in which CMB photons are scattered and boosted to higher energies by the high energy electrons within a cluster’s intracluster gas. By quantifying the degree of CMB lensing distortion around 500 clusters, the authors are able to constrain cluster masses by assigning a statistical likelihood on the masses of each cluster (Fig. 1).

The authors examine each of the galaxy clusters and measure the degree of CMB distortion relative to the “typical” CMB background. These measurements lead to a set of estimated cluster masses, and the red curve in Fig. 1 shows the average of these measurements. To ensure the reliability of their distortion measurements, the authors also measure patches of the CMB without intervening galaxy clusters. These “empty” patches should yield an average cluster mass of zero, and this is indeed the case (blue curve in Fig. 1). 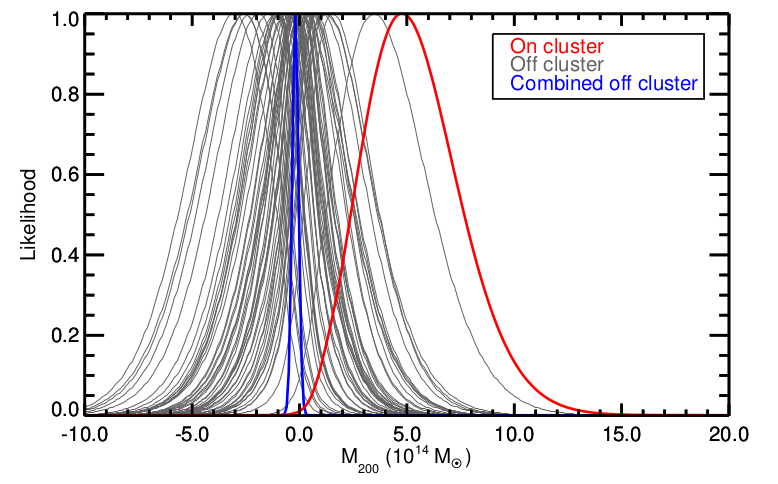 There are several important sources of systematic errors that can bias these mass estimates using this method. The authors estimate the impact of these errors by using their mass estimation method on mock data with known masses (i.e. a combination of realizations of the CMB, foregrounds, galaxy clusters, and noise). The largest source of error comes from the thermal SZ effect, which can completely obfuscate the CMB lensing signal. Fortunately, the tSZ effect has a well known frequency dependence and can be reliably subtracted from the multi-frequency SPT data. Additional systematic errors can result from the kinetic SZ effect, a Doppler shift induced by the cluster’s bulk motion, and assumptions about a cluster’s density profile (ex. spherical symmetry, non-clumpy, etc). However, the authors note that the errors induced by these systematics are about the same size as the statistical error bars of the cluster masses, so they are not corrected.

The likelihood method of estimating cluster masses in this paper is less precise than other mass measurement methods, but it is still a useful consistency check against these techniques. The authors note that more work needs to be done on reducing systematics, particularly on modelling the effects of the SZ effect and any foreground lensing. Higher sensitivity observations are expected to be done in the future, and these will improve the precision of thse cluster mass constraints. Specifically, future surveys will be less noise limited than the current SPT-SZ experiment, and the forthcoming CMB polarization data can be combined with lensing data to improve cluster mass measurements.

Reading the Epic of Reionization