If Astronomers hosted the Grammys, Fast Radio Bursts would likely be New Artist of the Year (and these guys would win Best Choreography). Fast Radio Bursts (FRBs) are extreme bursts of radio emission that last for a few milliseconds. They were discovered in 2013, and, in 2014, the number papers on FRBs skyrocketed. The origin of these transients is still uncertain — we can’t even agree if they are extraterrestrial! Astrobites has already covered two possible origins: stellar flares and neutron star mergers. Today’s paper suggests an even more exotic source: dark matter annihilation of neutron stars.

Missing Pulsars in the Galactic Center 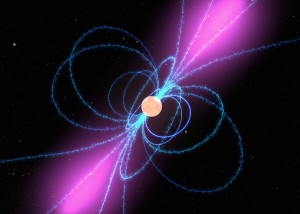 The key behind this work is tying together the mysterious origin of the FRBs with another open investigation of astronomy: the case of the missing pulsars. We believe that pulsars are neutron stars formed when the core of a massive star collapses during a supernova. Although there are many massive stars in the center of our galaxy, we have found no pulsars within the central 10 parsecs. (Oddly, scientists have discovered a magnetar, or what is thought to be a very young pulsar. This helps make the case that we do have the capability to find pulsars, but they seem to be missing.)

There has already been a suggested solution to the “missing pulsar problem”, which involves another mystery character: dark matter. Dark matter is the mysterious stuff that constitutes roughly 30% of universe but that we know almost nothing about. Our best guess is that dark matter is a new type of particle, but its mass and properties are highly uncertain. Given the “correct” set of physical properties, dark matter may be able to “eat” neutron stars from the inside out. Dark matter particles may scatter off the surface of neutron stars, heat up and sink to the cores. In the core, the dark matter particles can accumulate to push the neutron star above its critical mass. This would create a black hole which would swallow the neutron star.

You don’t need a lot of dark matter to trigger black hole creation— only about an asteroid-sized amount; however, because dark matter is unlikely to interact with nucleons, the density of dark matter must be extremely high. And where is dark matter density the highest? In the centers of galaxies, where pulsars appear to be missing! 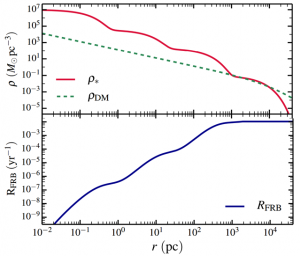 So what role do Fast Radio Bursts play in all of this? Today’s paper suggests that FRBs are the astrophysical burp caused by the black hole gobbling up the neutron star. The authors show that the energy released and the millisecond timescale of the FRBs roughly match what is expected from a collapsing neutron star.

Additionally, the authors estimate how often FRBs should occur if they were caused by collapsing neutron stars. To do this, they construct a model galaxy with the large dark matter density necessary for black hole formation. They estimate how many neutron stars form yearly in the model galaxy and give a very rough estimate of how many FRBs we should see. Fig. 1 shows the model galaxy’s dark matter distribution and estimated FRB rate. They find that there is about one FRB every one hundred years in a single galaxy if their theory is correct. Extrapolating to the night sky, they estimate that about 5,000 FRBs should occur every day. This is about half the FRB rate that we currently see in observations.

If this theory is correct,the authors lay down some basic hypotheses about dark matter, the missing pulsar problem and fast radio bursts:

Dark matter preying upon neutron stars and belching the remnants our way is certainly an exciting theory, but, for now, the source of FRBs remains a mystery. We’ll have to wait and see what new insights and observations 2015 will provide to us about these elusive events.